Joe Montana, the 49ers legendary quarterback and four-time Super Bowl champion, will do the coin toss at Super Bowl 50 on Sunday in San Francisco.

Montana, 59, has been married to his wife, Jennifer Wallace Montana, since 1985.

Here’s what you need to know about Montana’s wife:

1. She Is an Actress & Model Who Met Montana at a Commercial Shoot

Jennifer Wallace, 57, a model and actress, met Joe Montana in 1985 when they were shooting a Schick razor commercial together.

Joe Montana was previously married twice. He married his high school sweetheart Kim Moses in 1974, while at Notre Dame, and they divorced three years later. He then was married again in 1981 to Cass Castillo and they divorced in 1984. 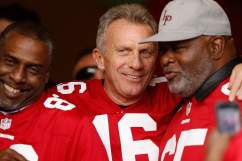 2. Joe & Jennifer Have 4 Grown Children Together

Joe Montana, his wife, Jennifer, and their son, Nick. (Getty)

She told CBS San Francisco that family means everything to her and her husband, who are now empty nesters.

“It’s something we’ve really stressed to the kids growing up,” she said. “I think it’s a question of what’s important. You make a list of things you need to do and sometimes it gets squashed… one phone call from the kids.”

3. She Is a Jewelry Designer & Has Been Involved in Charity Work

Joe and Jennifer Montana with Seattle Seahawks running back Marshawn Lynch at a charity event. (Getty)

She has also been heavily involved in the family’s charity, the Four Rings Montana Family Foundation. It helps children across the Bay Area. About 80 percent of the proceeds from her jewelry design company go to the foundation. She said it’s a “way to give back,” for her and her husband.

“A positive message of love, faith, and grace… four (Super Bowl) rings, four kids… we hope one day they will take a bigger part in it, finding more ways to give back,” she told CBS.

4. She & Joe Are ‘Featured Members’ of a Local News Station’s Super Bowl Coverage

While Joe Montana provided coverage analysis during the 2015 season, Jennifer Montana has co-hosted special programs for KPIX. She previously served as a correspondent on the station’s Evening Magazine in the late 1980s.

“As a longtime resident, I’m very interested in everything that Super Bowl 50 will bring to the Bay Area. KPIX 5 is familiar ground, and I am delighted to be able to work with this great group,” Jennifer Montana said.

5. The Montanas Recently Bought a $2.275 Million Home in San Francisco

Montana and his wife live in a $2.275 million home in San Francisco’s Marina District, which they bought last year, the Los Angeles Times reported.

They also own a 500-acre estate in Calistoga, California, that was listed in 2011 for $35 million. It includes a 9,700-square-foot main house, an equestrian center, vineyards and an olive farm. The Montanas sold a condo in downtown San Francisco to Giants outfielder Hunter Pence for $1.65 million in January 2014.

Since retiring from the NFL, Montana has owned horses and a wine company, Montagia. He has also appeared in several commercials.

The Montanas have an estimated net worth of $80 million, according to Celebrity Net Worth.