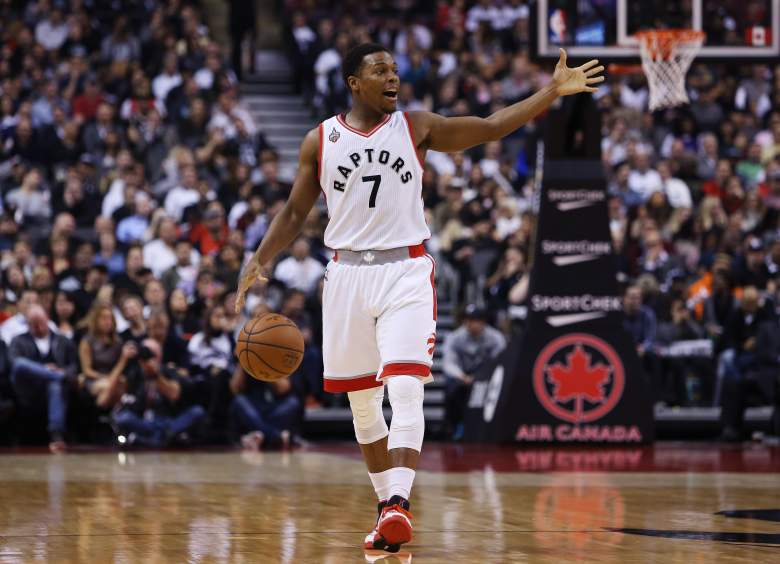 Lowry is finally finding his on-court rhythm in Toronto thanks to a serious support system at home. (Getty)

Kyle Lowry isn’t the only basketball talent in his family.

In fact, Lowry’s wife, Ayahna Cornish-Lowry, was a star in her own right and the pair, who have been together since they were kids, were a serious one-two punch of hardwood talent while they were growing up.

Now, however, Ayahna is more focused on using basketball to help others and, most importantly, raising her son with Kyle while cheering him on from the Toronto Raptors sideline.

The pair have been through just about everything together, going from high school to two different colleges and, now, taking on the NBA together. Here’s everything you need to know about the pair as well as Ayahna’s life away from the court:

Ayahna’s basketball career began at Cardinal Dougherty High School in Philadelphia, Pennsylvania where she averaged 18.7 points, nine rebounds and seven assists as a prep senior. Throughout the course of her career she racked up more than a handful of pre and post-season awards and was named a four-time All-City selection and two-time Philadelphia Catholic League Northern Division MVP.

By the time Ayahna graduated from Dougherty she had set a school record with 1,782 points during her career.

It was there that she also first met Kyle.

A transfer from Northeast High, Kyle found his basketball stride at Dougherty, becoming a star in the Catholic League and fine-tuning his on-court game. 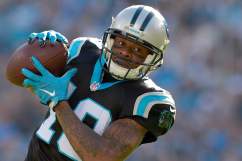 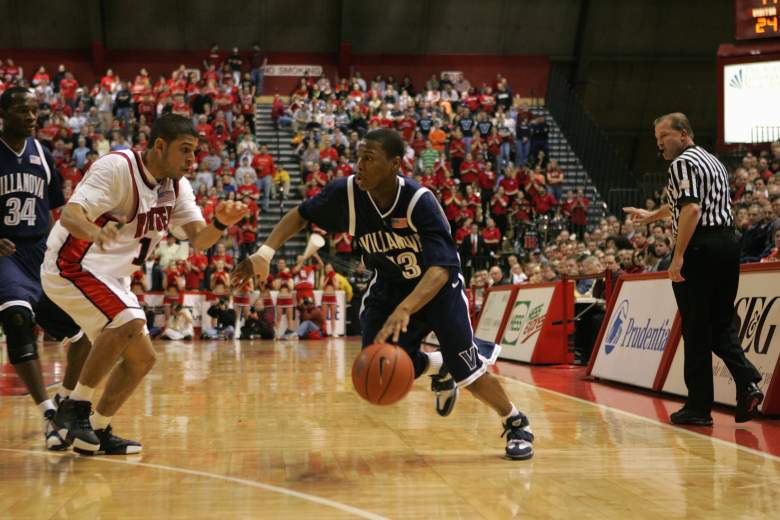 While Lowry was at Villanova, his soon-to-be wife was setting her own records at St. Joseph’s. (Getty)

After successful high school careers for both Ayahna and Kyle, the pair moved on to the college game, taking their talents to two different programs; St. Josephs for her and Villanova for him.

At St. Joseph’s, Ayahna was just as dominate as ever. She appeared in 33 games as a freshman, starting in 15, and averaged 5.2 points and 2.6 rebounds per game. Then, as a sophomore she led the team in scoring with 12.5 points per game and was named the squad’s Best Offensive Player. In 2005-06, Ayahna was named an Atlantic 10 All-Conference Second-Team selection, averaging 12.1 points and 1.5 steals per game; once again leading the team in scoring.

However, injury struck Ayahna in the waning weeks of her junior season as she missed the final nine games of the year with a torn ACL. It was an injury that seemed to run in the relationship. Kyle, just a week into his freshman classes at Villanova, also tore his ACL playing pickup basketball.

3. The Pair are Parents to One Son, Karter

Lowry and his son Karter are frequently spotted together after Raptors games. (Instagram)

After wrapping up their respective college careers, getting married and finding their footing in the NBA, Ayahna and Kyle became first-time parents in 2011, welcoming their son Karter.

Since his father’s arrival in Toronto, Karter has become a bit of a star in his own right, crashing press conferences and even rapping Drake songs. His most famous moment, however, came in 2014 when he joined Kyle for a post-game presser after the Brooklyn Nets had eliminated the Raptors from the playoffs in Game 7. Check it out:

Karter is also a frequent visitor on Kyle’s Instagram feed. The father-son duo are social media stars and the adorable-level is, regularly, off the charts.

Ayahna and Lowry regularly host charity events in Toronto and Philadelphia with their Foundation. (Instagram)

Both Ayahna and Kyle are well aware of what basketball can do and how it has changed both their lives. Now, they’re hoping to help change others’ lives as well. So, in 2013, the long-time couple founded the Lowry Love Foundation. Ayahana explained the mission of the Foundation, writing on its website:

Through this foundation, our mission is to touch the lives of the underprivileged and disadvantaged in order to promote their attainment of a better quality of life. With the help of the community and our partners, we strive to have a positive impact on the lives of Philadelphians and Torontonians most in need through supportive programs and initiatives.

The Foundation holds several events, in both Philadelphia and Toronto, throughout the year, including the annual Kyle Lowry Community Day and the annual Lowry Love Thanksgiving.

It should be entirely surprising, but Ayahna and Kyle have become major stars in Toronto since Lowry first joined the Raptors. The pair are frequently spotted in the city’s most famous spots, including Palmerston Blvd. in the west-end and Mill St. in the Distillery District. Another favorite for the pair? The CN Tower. They usually bring Karter with them as well.

In fact, the Lowry’s have become so synonymous with Toronto that no one bat an eyelash when Kyle announced, in November 2015, that he was releasing a nine-piece, made-in-Canada menswear collection for Roots. He told the Toronto Star:

I wanted to give a little Toronto feel to it. The thing about the city is I love how different it is. You’ve got different places, different cultures. It’s not about seeing one part of downtown. It’s about seeing ’Sauga, and everywhere in the GTA.

The Lowrys will be in Toronto for the foreseeable future. Lowry signed a four-year, $48 million extension with the Raptors in July 2014.