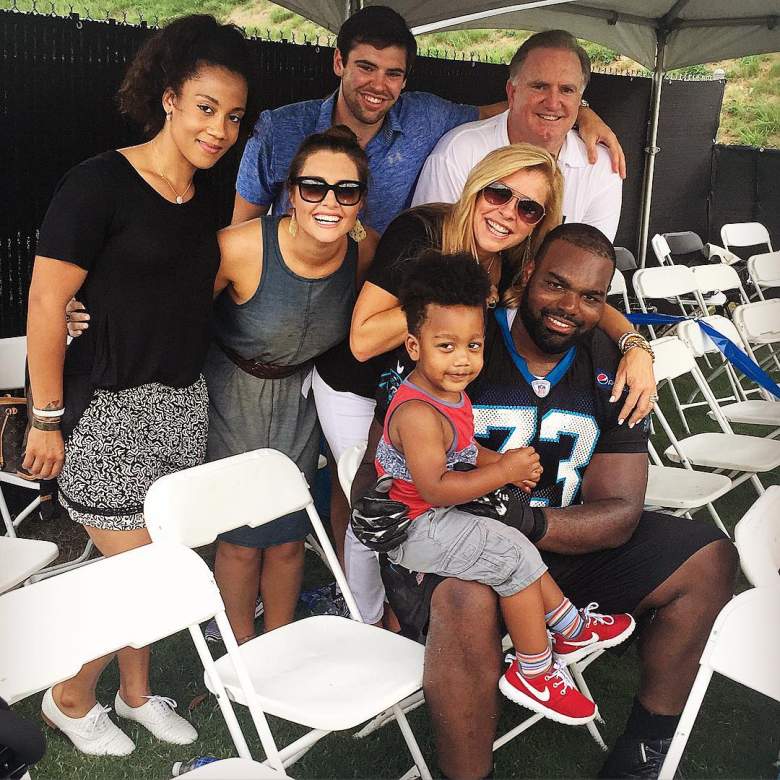 Michael Oher and his family have lived in the spotlight for years after the release of The Blind Side. (Instagram)

Michael Oher was famous before he got famous.

The Carolina Panthers offensive lineman has eight NFL seasons and two Super Bowl appearances under his belt. He was drafted in the first round. He was a standout at Ole Miss. And, most importantly, his life story was turned into an Academy Award winning film.

Nearly everyone knows the story now. Oher was a teenager when he was adopted by the Tuohy family and turned his life around, helping him earn a scholarship to Ole Miss and, eventually, a shot at the NFL.

But Oher’s family life is much more than the story depicted in The Blind Side. In fact, if it was up to Oher that story never would have been told. This is still a family, a group that has faced its own ups and downs and supported each other every step of the way – even on the Super Bowl sidelines.

Here’s everything you need to know about Oher and the Tuohy family: 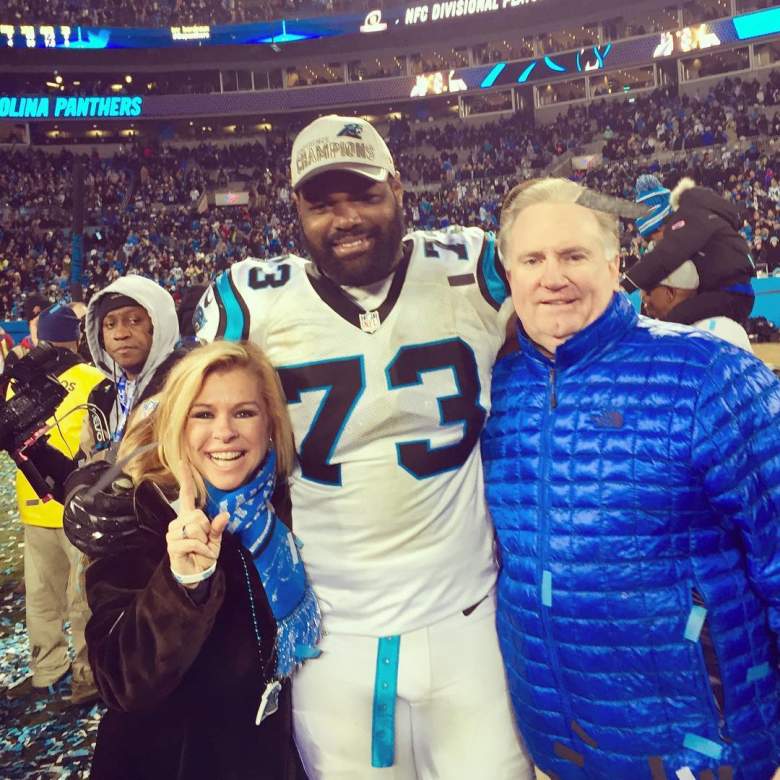 The Tuohys first met when they were college students at Ole Miss. Leigh Anne was a cheerleader, homecoming maid and an active member of her sorority Kappa Delta. Sean was a standout on the basketball court. It didn’t take long for them to hit it off.

After welcoming two of their own children, Leigh Ann and Sean adopted Michael Oher in 2004 when he became part of their family after meeting their daughter in the hallway at Briarcrest High School. Leigh Anne discussed seeing Michael playing in the Super Bowl with ABC News, saying:

On Sunday, I will be bawling because that’s my child first of all – to see your child live out a dream is wonderful – but every time he comes out there it represents hope to me. The Panthers gave my son a chance and I’m forever grateful. That’s part of being a mother.

Since The Blind Side, Leigh Anne has stayed in the spotlight, still working with her own design firm, Flair I, as well as appearing on Extreme Makeover: Home Edition in 2010-2011. In 2013, the Tuohy family was also featured on UP Network in the series, Family Addition with Leigh Anne Tuohy, which helped families going through the process of adopting a child.

2. His Biological Mother, Denise, Was Addicted to Crack Cocaine

Before he was adopted by the Tuohy’s, Oher lived in various foster homes and dealt with periods of homelessness throughout his childhood, while his mother, Denise, was battling an addiction to crack cocaine.

Denise Oher is still working on her own personal recovery and, after The Blind Side was released, she did her best to stay out of the spotlight. However, after Oher won his first Super Bowl title with the Baltimore Ravens, she spoke to an area TV station, telling her side of the story:

I’m proud of him, I love him, and I’m going to give God all the praise for his success. That addiction is very hard to just stop. You have to work on it. You have to pray and you have to be committed to it and you have you want to change your life from that. See, I been portrayed as the worst mother in the world, and that wasn’t it.

In addition to Oher, Denise also has 11 other children and told WMC-TV that her son has previously helped her financially in the past. She also added, at the time of the interview, that she was getting help from priests at a nearby church as well as a close group of friends.

Oher’s adoptive father, Sean, was an athlete in his own right and set several SEC records. (Instagram)

The patriarch of the Tuohy family helped inspire the group’s initial love of sports, playing college basketball at Ole Miss, where he broke a handful of SEC records and led the Rebels to their first league championship.

After graduation, Tuohy was drafted by the New Jersey Nets in 1982, but opted to continue his career overseas before returning stateside and focusing on starting his own small business empire. He did just that.  Fast forward to present day and Tuohy is the head of a company that owns and operates 93 fast food restaurants.

Tuohy also turned to the broadcasting world, serving as an NBA broadcaster for the Memphis Grizzlies for more than a decade as well as a radio broadcaster for Ole Miss as well. He’s also a successful motivational speaker.

SJ Tuohy has found his own road at Loyola, where he’s currently a junior. (Instagram)

SJ Tuohy is not a little kid anymore.

The youngest member of the Tuohy family has already graduated from college and, as he put it in 2013, “I have aged; it’s a truly sad thing that many whom have seen the Blind Side are very disappointed with. I am no longer eight years old, I’m 21… and have facial hair.”

Tuohy got his BA in communications from Loyola University in Maryland, and attended grad school at SMU. That’s right, he didn’t go to Ole Miss. He did, however, keep up the family tradition of athletics; joining the Greyhounds basketball team as a walk-on and playing football at SMU.

In addition to competing, Tuohy wrote a bi-weekly column for Fansided.com and also helps with the marketing for his sister’s cookie company. Tuohy is a simple guy at heart. In fact, he’s pointed that out, writing: “To paraphrase a Ron Swanson quote, I like sports, breakfast food, and pretty brunettes, I’m a simple man.” You can follow him on Twitter here.

Collins Tuohy, Oher’s adoptive sister, may have the closest relationship with the NFL star, after she first met him in the hallways of their high school more than a decade ago.

Now, Collins, is a success in her own right, taking on the Memphis business world by storm. She’s a co-owner of Whimsy Cookie Co. and is also a frequent public speaker in the area. A graduate of Ole Miss, Collins almost stumbled into the cookie business, describing her road to sugar paradise in an interview with Style Blueprint:

I tasted my business partner’s cookies at one of my little brother SJ’s high-school football games, and they had me at first bite! Seriously, I knew immediately that I needed to find who made these cookies and hug them! I ordered a few times to make sure the cookies were not a fluke and the orders kept tasting better and looking more creative. I found out the creator of the cookies was Laurie Suriff and I asked her to go to lunch with me a few weeks after that. We joined forces and quickly started building our brand.

Now, Collins and her business partner are focused on expanding Whimsy, appearing on her mother’s TV show on UP Network and, when she has the time, playing piano. In fact, Collins has played piano for 20 years and still takes lessons.