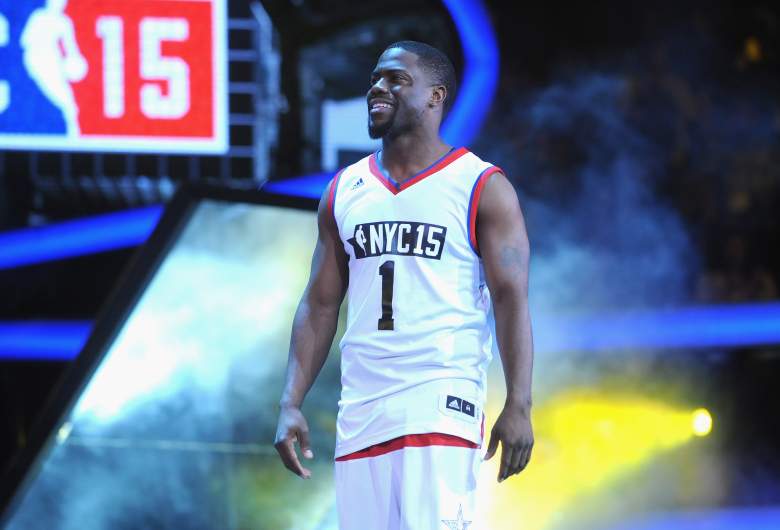 Kevin Hart has become synonymous with the NBA All-Star Celebrity Game and he’s back for another performance on Friday night. (Getty)

What would NBA All-Star weekend be like without the celebrity game? It would be boring. That’s what it would be.

Luckily, we don’t have to live in a world where Kevin Hart isn’t trash talking on a basketball court. The comedian is back again, serving as the coach of Team USA, and taking on the Drake-led Team Canada in the annual NBA All-Star Celebrity Game on Friday night.

This year, Hart will be flanked by a brand-new roster of big-name players as he looks to notch a fifth MVP title. We’ve got all the details on the game, including both team’s rosters, as well as how to watch the matchup even without a TV:

Game Preview: When in Toronto, it’s only appropriate that things be focused as much as possible on Drake. After all, the Grammy-winning artist is the Toronto Raptors Global Ambassador and his basketball-fandom has been well documented on social media for years.

So, it only makes sense that, on Friday night, Drake will be serving as the coach of Team Canada at the NBA All-Star Celebrity Game. But who will be joining him on the roster? In addition to Drake, Canada will be coached by by two-time NBA MVP Steve Nash and Toronto Blue Jays All-Star right fielder José Bautista. The team will also include the likes of Rick Fox, Tracy McGrady, former WNBA player Tammy Sutton-Brown and Arcade Fire’s Win Butler.

Then, of course, there is Team USA.

Perpetual Celeb All-Star participant Kevin Hart is making another on-court appearance as player/coach and he’s also got a pretty solid tam behind him as well. Muggsy Bogues, WNBA MVP Elena Delle Donne and Nick Cannon will be suiting up with Hart, looking to win a title on foreign ground.

We can’t promise any legitimate basketball, but we can promise some trash talk, some jokes and a pretty entertaining game. Plus, who doesn’t want to see Drake cheering on the sidelines again?

Read More
Basketball, NBA
Kevin Hart vs. Drake. What more could you want from a celebrity game? We've got all the details on how to catch the matchup right here.