Russell Westbrook won the All-Star Game’s MVP award for the second consecutive year, as he led the West to a 23-point win in Toronto. Westbrook led his team with 31 points, and became the first player to win the award in consecutive years since Bob Pettit in 1958-59.

Oddsmakers tapped Kobe Bryant as the favorite to win a record fifth MVP award, but Black Mamba finished with just 10 points in 25 minutes of action. The biggest surprise of the night was Paul George, who returned to the All-Star Game after a season-long injury last year. George finished with 41 points and a record nine threes, and put the East ahead early. The West opened to a poor shooting start, but they came back in the second quarter to take a two-point lead at the break.

As usual, the game opened up with zero defense from both teams. Dunks were flying from all over the place, including some big alley-oops to Anthony Davis. Davis finished with 24 points on 12-13 shooting.

Westbrook made explosive plays throughout to keep the West’s lead growing. Westbrook was dunking and dishing from the start, finishing the first half with eight points, four assists and three steals. The first half saw a combined 182 points, the highest halftime score in ASG history.

Get out of this man's way! Westbrook finishes with AUTHORITY! #PhantomCam https://t.co/y2EeycGLKC

The scoring continued in the second half, as the West steadily pulled ahead. The growing lead made defense less appealing, as both teams raced to 200 points. Paul George took over for the East, cementing his return as one of the league’s elite scorers.

#PaulGeorge sets the @NBAAllStar Game RECORD with 9 made ?'s and a game-high 41 points for the East! pic.twitter.com/x6vcuiQWwz

A Gregg Popovich-led Western Conference turned in a surprisingly balanced performance for an All-Star Game. Five players scored at least 20, making it tough to crown an MVP for the winning team.

In his final All-Star Game, Kobe Bryant finished with 4-11 shooting and a bricked fadeaway over Pau Gasol. He was subbed out in the final minute, so the crowd at Air Canada Centre could give him a standing ovation. 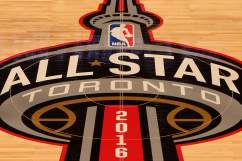