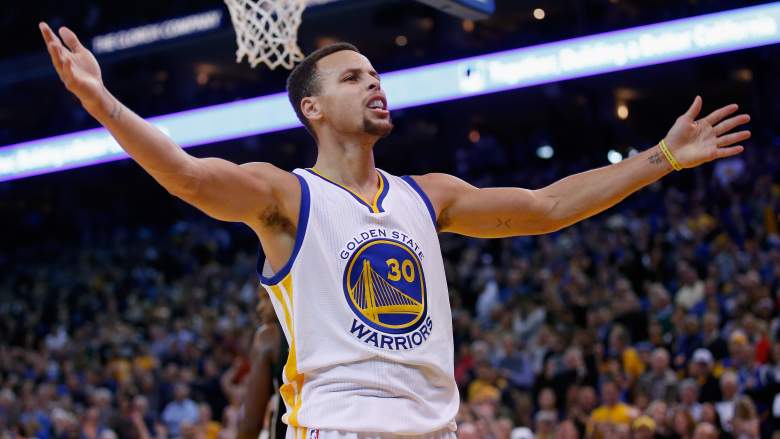 Steph Curry is one of many stars on display this weekend. (Getty)

The NBA is officially on break, which means it’s time for all-star weekend.

Whether it’s the game’s brightest young studs showing off their talent in the Rising Stars Challenge, sharpshooters going at it in the 3-point contest, elite athletes jumping off their invisible trampolines in the dunk contest or the actual All-Star game, there’s something for everyone over the next three days.

Here’s a look at when and where to watch all of the action from Toronto:

TV Note: TNT and ESPN are for the United States; TSN and SportsNet are for Canada

NBA All-Star Game Top 10 Plays: February 15thCountdown the top 10 plays from the 64th NBA All-Star Game from Madison Square Garden About the NBA: The NBA is the premier professional basketball league in the United States and Canada. The league is truly global, with games and programming in 215 countries and territories in 47 languages, as well as NBA rosters at…2015-02-16T06:48:55Z

The Rising Stars Challenge, for the second year in a row, will pit Team USA against Team Canada. With what is looking like one of the deeper rookies classes in recent memory–Karl-Anthony Towns, Kristaps Porzingis, Devin Booker and Nikola Jokic all have the look of future (or present) stars, while guys like Jahlil Okafor, D’Angelo Russell and Emmanuel Mudiay are all making impacts–there will be a bevy of talent in this one.

And that’s not to mention sophomores Zach LaVine, who’s jaw-dropping athleticism is made for this game, or Canadian-born fan favorite Andrew Wiggins, who took MVP last year:

Andrew Wiggins Earns MVP with 22-Point PerformanceAndrew Wiggins scored 22 points and was named MVP as Team World topped Team USA 121-112 in the 2015 BBVA Compass Rising Stars Challenge. About the NBA: The NBA is the premier professional basketball league in the United States and Canada. The league is truly global, with games and programming in 215 countries and territories…2015-02-14T05:28:50Z

The Skills Challenge, needing a jolt of energy, will feature a compelling new format this year, as the guards will battle it out on one side of the bracket and the forwards on the other:

This event has suffered from players going half speed in the past, but that won’t be happening this year. Every big on the planet wants to prove he can play point guard, while no guard will want to face the music if he loses to a forward in this competition.

We’re in the golden age of 3-point shooting, and that’s why it stole the show last year:

Steph Curry is back to defend his title, but with teammate Klay Thompson, sniper J.J. Redick, home-town favorite Kyle Lowry and several others, there is a slew of compelling storylines to watch in the stacked field.

The dunk contest, while easily the most entertaining in theory, can struggle with staleness at times, but as long as defending champ Zach LaVine is participating, it’s an event you can’t miss. It’s that simple:

Zach LaVine's 2015 Sprint Slam Dunk Contest PerformanceCheck out Zach LaVine's rim-rattling dunks from the Sprite Slam Dunk contest. About the NBA: The NBA is the premier professional basketball league in the United States and Canada. The league is truly global, with games and programming in 215 countries and territories in 47 languages, as well as NBA rosters at the start of…2015-02-15T06:51:25Z

Finally, you have the all-star game. Curry and Russell Westbrook in the same backcourt. Kyle Lowry and DeMar DeRozan playing in front of the home fans. James Harden, Anthony Davis, DeMarcus Cousins, Klay Thompson and Draymond Green coming off the bench. John Wall and Isaiah Thomas in the open court.

In other words, better cancel those Valentine’s Day plans.

Read More
Basketball, NBA
NBA All-Star weekend is here. Find out when and where to watch all of the entertaining events.