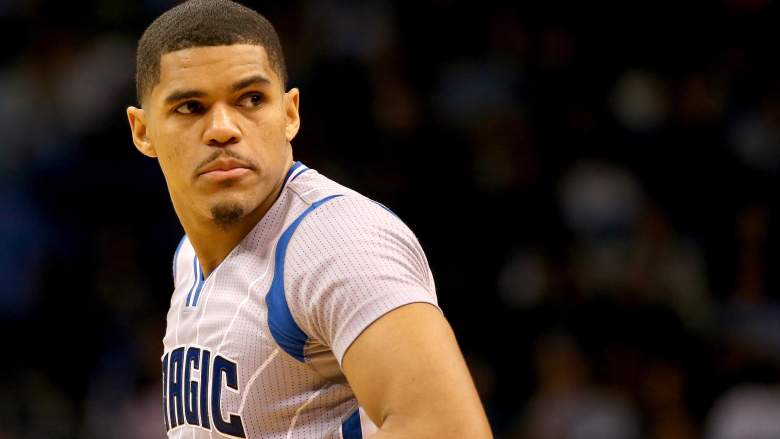 Tobias Harris was the first big name to be moved this week. Who will join him? (Getty)

On Thursday, the landscape of the NBA changes in a major way.

Whether it’s out-of-contention teams stockpiling assets for the future or playoff contenders adding a midseason rental to help for a postseason run, all 30 franchises are going to be busy leading up to Thursday’s 3 p.m. ET trade deadline.

Here’s a complete look at all the deals that have gone down. We’ll update it as new moves are made.

Morris has been an enigma this year, causing more problems in the locker room than anything else. Still, this is a guy who is averaging 16.3 points and 7.7 rebounds per 36 for his career, and if he can get back to being a consistent offensive threat, it would be a huge boost for the Wizards, who have dropped to 10th in the East.

It’s a good return for the Suns, who are in rebuilding mode and were pretty obviously fed up with Morris.

Blazers Get: Brian Roberts and second-round pick from Heat

The Heat, continuing to save money, drop under the luxury tax with this move, while the Blazers, who have a ton of cap space, continue to take on salary and acquire draft assets in the process.

Foye’s per-36 numbers are down this year, but he’s better than he has played this season and represents an upgrade on the wing to Oklahoma City’s fairly weak second unit.

For the Nuggets, Augustin will slide into a backup role behind rookie Emmanuel Mudiay.

The Jazz get the veteran point guard they’ve been searching for. Mack has proven to be a solid offensive player when given the minutes, averaging 13.5 points and 6.7 assists per 36 over the last three seasons. He’ll immediately challenge Trey Burke and Raul Neto for the starting PG job in Utah.

For Atlanta, there was no reason to keep Mack around, as he wasn’t seeing the court much behind both Jeff Teague and Dennis Schroder.

Bracing for a postseason run, the Cavaliers receive a veteran big man who can stretch the floor. Frye won’t be much more than the third or fourth guy off the bench in Cleveland, but he’s certainly capable of playing an important role for them. The move also saves more than $10 million in salary and luxury tax.

The Blazers, meanwhile, will reportedly waive Varejao, meaning they pretty much get a first-round pick for taking on his salary. They can stretch his nearly $10 million owed over the next five years.

Orlando continues to clear cap space by getting rid of Frye, and they’ll be major players this summer. Cunningham is also expected to be waived.

Detroit lands a talented young power forward in Motiejunas, who has shown potential in this league but had fallen out of the rotation due to Houston’s immense frontcourt depth.

Daryl Morey and the Rockets reportedly weren’t keen on giving up the skilled 25-year-old 7-footer, but they get a coveted first-round draft pick, save $1.2 million in luxury tax and open up a roster spot.

Not much more than a salary dump here, as the Heat save just over $2 million in luxury tax with this move. Stokes, a second-round pick in 2014, has played just 18 minutes with the Heat and Grizzlies this season.

Harris’ numbers are slightly down from a year ago, which is concerning after he signed a four-year, $64 million contract in the summer. However, it’s easy to forget that he’s still only 23 years old and holds loads of potential on the offensive end. Giving up Jennings and Ilyasova isn’t a bad price to pay to see if Harris can progress into the star many expect him to be

For the Magic, they free up space for minutes for talented young players like Aaron Gordon, Evan Fournier and Mario Hezonja. Moreover, Jennings is a free agent next summer and Ilyasova’s contract is almost completely non-guaranteed, freeing up nearly $17 million in cap space to go after a big free agent come July.

Lee, a solid shooter and defender, gives the Hornets some necessary depth on the wing after losing Michael Kidd-Gilchrist for the season. Lee should slide into the starting lineup at shooting guard, allowing Nicolas Batum to move to the 3.

The Heat get Brian Roberts to help backup Goran Dragic with Tyler Johnson sidelined, while Memphis adds assets for the future. Hairston and Andersen are both unrestricted free agents next summer, while the bevy of second-round picks can always come in handy.