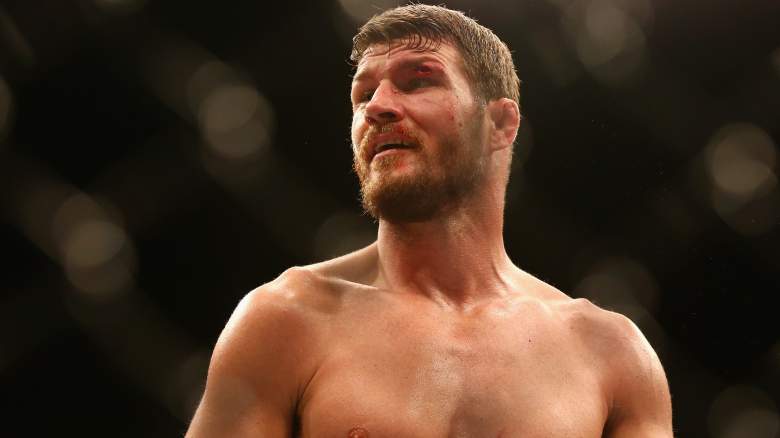 Michael Bisping scored the biggest win of his career, beating Anderson Silva in a dramatic fight full of controversy. (Getty)

In one of the most anticipated fights–PPV or otherwise–we’ll see in 2016, UFC legend Anderson Silva and Michael Bisping clashed at the O2 Arena in London on Saturday.

And it didn’t disappoint.

The pair of veterans went toe-to-toe with some exhilarating action, with the hometown favorite Bisping walking away with a bloody face and unanimous decision victory over one of the best MMA fighters of all-time.

While most of the first round was both fighters feeling each other out, there was a flurry of action right before the bell:

The second round was similar, with Bisping scoring a big knock down:

But that was nothing compared to the third round, which featured some of the most controversial, wild action you’ll see. After Silva’s mouthpiece was knocked out, Bisping was talking to referee Herb Dean and, right before the final bell rang, Silva nailed Bisping with a vicious flying knee. Silva began celebrating like he had earned the knockout, even climbing to the top of the Octagon, but Dean didn’t end the fight:

Can we go back to the end of round 3?! #WhatHadHappenedWas https://t.co/VqquhAt4Gn

No one really knew what was going on.

What the hell is going on!! Crazy

A bloodied Bisping just had to hold on for the final two rounds, and he was able to do exactly that, but not before Silva landed this in the fifth:

But it wasn’t enough, as the judges, much to chagrin of Dana White, rewarded Bisping with the biggest win of his career in front of his home country. And after such an absolute war, the two showed plenty of respect for each other afterwards:

It's all about #Respect https://t.co/fRobzjPoMM

It’ll be interesting to see what this means for the middleweight division.

Although it’s not yet decided who Luke Rockhold will face in his first title defense, there are plenty of options with UFC 200 as a potential landing spot. Chris Weidman surely wants a rematch. Rockhold has said he wants to face Vitor Belfort, the only one in the division to beat him. Yoel Romero, who is undefeated inside the Octagon, has a resume that can’t be denied anymore.

And now there’s Bisping, who has been searching for a title shot for close to a decade.

The 37-year-old may not be in line for a title fight quite yet, but after this performance he’s squarely in the picture atop the division.

At the same time, it’s clear more big fights still await Silva, as well. At 40, he can still put on a show.

Read More
Anderson Silva, UFC
Watch the highlights from UFC Fight Night London, as the legendary Anderson Silva and Michael Bisping clashed in a wild one.