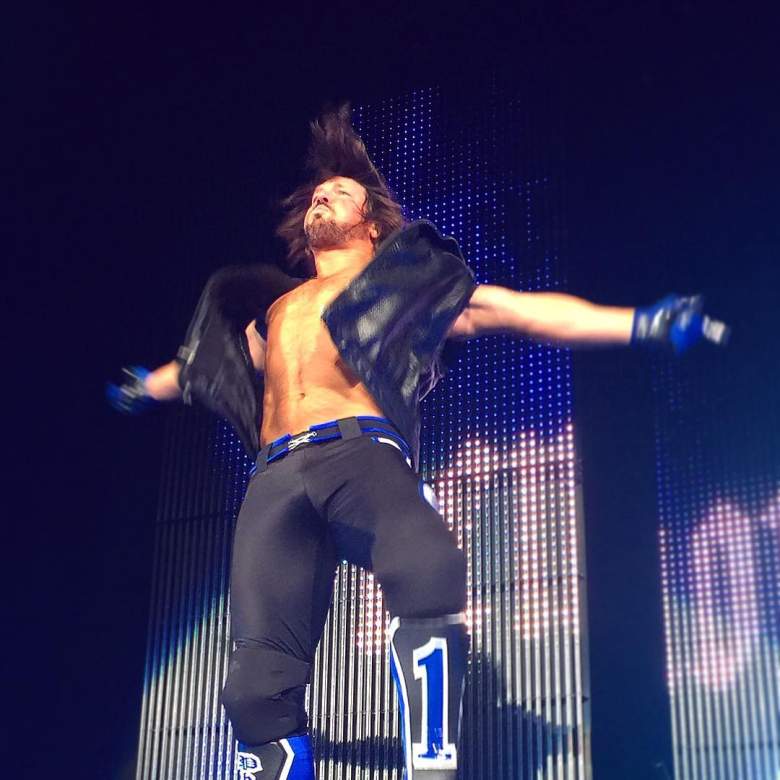 AJ Styles is back in the ring on Monday night and his feud with Chris Jericho is just getting started. (Instagram)

It’s the last RAW before Fastlane and that means the WWE is pulling out all the stops on Monday night.

Case in point? A five-way match to open things up with the WWE Intercontinental Title on the line. Yup. That happened. Read on for the latest updates on how each match played out:

It took nearly 30 minutes of RAW time, but Kevin Owens left the ring with his Intercontinental title. Again.

Owens took down Stardust, Tyler Breeze, Dolph Ziggler and, of course, Dean Ambrose in the fatal five-way. The now two-time champion won his belt with a pop-up powerbomb on Breeze for the win.

After the match, Owens celebrates his title and Renee Young discusses the early-night events with Dean Ambrose. He says he isn’t shocked by what The Authority has done, but rather is using that frustration to motivate him during his match at Fastlane.

The New Day open up by throwing some serious insults at Mark Henry before the big man, finally, gets into the ring.

It doesn’t taking long for Big E to get the victory and, after the match, the referees speculate that Mark Henry may actually have been injured. He’s doubled over heading into commercial, clutching his ribs.

AJ Styles vs. The Miz

AJ Styles continues his strong performance in the world of WWE, once again taking on The Miz and, once again, coming away with a victory.

His feud with Chris Jericho took another turn as well as Jericho sat in as a guest commentator on the match.

The growing feud between Roman Reigns, Brock Lesnar and Dean Ambrose is set to come to a head as the three continue to hype up their Fastlane match on Sunday night. Of course, the biggest question regarding the trio is if or when Reigns and Ambrose will turn on each other. The friends have been fairly consistent throughout this entire buildup, but eventually, someone is going to have to make a move to get the berth to Wrestlemania.

While the focus of tonight’s RAW will certainly be on the three Superstars, there is still plenty of action elsewhere on the schedule.

In the Divas division, Brie Bella will step into the spotlight, getting ready for her Fastlane match against Charlotte and heading back into the ring for the first time since her husband Daniel Bryan retired last week.

WWE fans can also expect an update on the quasi-truce between Becky Lynch and Sasha Banks. The two women have teamed up and are set for tag-team match against Team BAD’s Naomi and Tamina at Fastlane.

Meanwhile, in the tag-team division, the after-affects of The Dudley Boyz’s heel turn last week will be a major plot point tonight. It’ll be interesting to see how the Boyz matchup against The New Day and where The Usos will fit into the storyline.

The AJ Styles-Chris Jericho feud is still happening as well and there are rumors that the WWE may even bring The Miz into the action as well.

Read More
WWE, WWE Raw
It's the final RAW before Fastlane and the WWE is pulling out all the stops and the biggest Superstars on Monday night. We've got all the spoilers here.