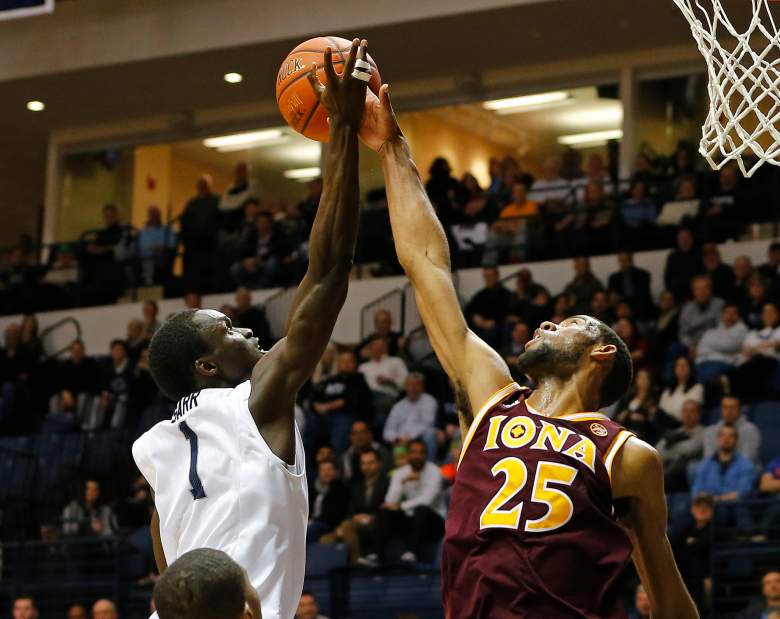 Iona and Monmouth face off in the MAAC Championship game on Monday night. (Getty)

And things are going to get good as Monmouth faces off against Iona at the Times Union Center in Albany, New York.

Of course, there’s plenty of reason to tune in. The Hawks have had one of the most talked-about mid-major seasons in the country and Iona has been consistently competitive in the MAAC for years.

Oh, yeah, and the two teams got into a fight the first time they played each other. Seriously.

There’s an NCAA Tournament berth on the line this time and this is a game you’re not going to want to miss. Here’s everything you need to know about the game, including how to live stream it if you’re not near a TV:

Game Preview: There was no love lost when Monmouth and Iona faced off during the regular season. In fact, there were more than just a few punches thrown on January 16.

Tempers flared on both sides after Monmouth handed the Gaels a 110-102 loss in New Rochelle and players tussled while going through the postgame handshake line.

Although it wasn’t clear who did what first, Iona junior Jordan Washington was spotted slapping Monmouth’s Chris Brady in the face. Yup. Slapped him. In the face.

“Chris’ nose is about this swollen right now, so if [Washington] slapped Chris that hard, man he should maybe try MMA because nobody smacks, and the kid’s nose is this big downstairs right now,” Monmouth coach King Rice said after the game. “So I don’t know if it was a smack or what it was, but big Brady’s nose is pretty messed up right now.”

That’s the kind of emotion both sides will bring into tonight’s championship tilt.

The Hawks come into the final after defeating Fairfield 76-63 on Sunday, while Iona took down host team Siena in the semifinals.

Keep an eye on A.J. English tonight. The senior star scored 29 points against Siena and comes into the final averaging a career-best 22.5 points a night. English is 6-feet-4-inches of pure scoring dominance and if he gets going, he’s nearly imossible to stop.

Read More
Basketball, College Basketball, NCAA
We're one game away from crowning a MAAC champion. Monmouth has gotten the headlines all season, but Iona is the old favorite. Who gets the title and the tournament berth?