Though El Clasico is usually a celebration of one of the greatest rivalries in sports, Saturday’s events started with a moment of reflection. Over the international break the soccer world lost Johan Cruyff, a man who made his mark on Barcelona history both as a player and a manager during his career.

To honor the man who wore number 14, all Barcelona shirts have been altered to say “Gracies, Johan” on the front. There was also be a moment of silence before the match, and the fans applauded throughout the 14th minute. Before kickoff, the fans at Camp Nou held up 90,000 cards to form a giant “Gracies, Johan” in the stands.

Before the match, fans at Camp Nou were also treated to this short video honoring Cruyff:

Emotional Dream Team tribute to Johan Cruyff. This is the video as seen at Camp Nou #GràciesJohan https://t.co/fZ1hg8UboF

During his career as a player, Cruyff lost to Real Madrid just twice in eight Clasico appearances (4-2-2). That includes a 5-0 win over Los Blancos in 1974, when Cruyff scored his first-ever Clasico goal.

Tributes remember Cruyff as a young scoring dynamo, and perhaps the best player to ever hail from the Netherlands. But Cruyff was hugely successful on the sidelines as well, winning four consecutive league titles with Barcelona from 1991-94. 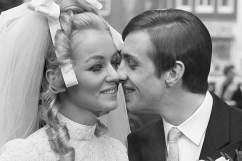