El Clasico is over. You can catch your breath now. Madrid win 2-1, ending Barcelona’s 39-match unbeaten run. Barcelona still hold a seven point lead in La Liga, but this could be the spark that fuels a late Champions League run for Madrid. Zinedine Zidane may have only been 4-4-3 as a player against Barcelona, but he is 1-0 as manager after winning his first-ever Clasico from the sidelines.

Zidane makes one more change as Real Madrid prepare to hold on for the final minutes in what would be an amazing victory for Los Blancos.

10-men Real Madrid are ahead at Camp Nou after Cristiano Ronaldo sends a low strike past Bravo. CR7 was all alone at the far post, and fielded a great cross for what could be the eventual game-winner. It’s a huge goal for Ronaldo on a night where Messi was supposed to score his 500th career goal, but he has been silent in this match.

GOAAAAAL! It's in from @Cristiano. The Dark Invader has @RealMadrid in the lead! #ElClasico https://t.co/HTIGRy0aT7

Sergio Ramos has finally been sent off, and Madrid will play the final seven minutes and extra time with 10 men. Ramos made the poor decision to lunge at Luis Suarez, and it was obvious to everyone at Camp Nou that his day was done.

Gareth Bale giveth, and the offical taketh away.

The Wales international looked to give Madrid the lead, after calling for a header and sending it past Bravo. But the celebration was interrupted, as Bale was called for a foul and the goal was disallowed. We remain at 1-1.

That is outrageous, should be 2-1 Real. #ElClasico

Barcelona makes the first substitution in today’s match. Not to be outdone, Zidane makes his first change only minutes later.

It’s a beautiful volley for Benzema, who has been mostly quiet but has had several big moments in the match. A ball into the middle from Toni Kroos lofted into the mixer, where Benzema was able to pounce. We’re tied.

Barcelona keep the pressure on Navas, and his defense lets him down on a corner. Pique rises above the Madrid defense, and breaks the game open with a thunderous header.

56: Piqué gets away from his marker and scores a text book header past Navas #FCBlive #ElClásico (1-0)

Absolutely incredible save from Navas. Messi looked to surely have his 500th career goal floated into the top corner, but the flying Costa Rican was just barely able to push it away. Thanks to Navas the score remains blank.

Great individual chances from both teams. Neymar has been a nightmare for the Madrid defense, but he was unable to finish off some fancy dribbling. That prompted a move to the other end, where Benzema had a chance in the box but his shot was deflected away by the defense.

Ramos drags down Suarez but is still on the field, much to the dismay of over 90,000 fans at Camp Nou. Ramos picked up a yellow card in the first ten minutes, and did not receive a whistle for roughly dispossessing Messi near the penalty area later in the first half.

Real Madrid will be pleased with the score, as they were able to hold Barcelona to a scoreless draw at the half. Barca could easily have been up inside of ten minutes, but Luis Suarez was unable to strike a low ball across the goal from Neymar in the ninth minute. Only minutes later, Ramos nearly caused the end for Madrid early with a sloppy challenge on Messi. Already playing on a yellow card, Ramos stuck his leg in front of the Argentine just outside the box. It could have been a red card for Madrid and a penalty for Barca, but the referee remained silent.

After those two chances, Madrid was able to test Claudio Bravo a few times on the counter. All of BBC were involved in the first half, including a narrow free-kick miss from Ronaldo. The best chances came from Benzema, who is playing much better than in the previous Clasico in November. As you can see from the stats below, Barcelona may have dominated possession but the chances on target remain similar.

Dani Alves smokes a shot over the crossbar, and we may be scoreless headed into the break. As I type that sentence, Benzema has a chance in front of goal but couldn’t get over it. For a scoreless first half, there’s been a fantastic pace to this match.

43: Benzema slices a shot over the bar from inside the Barça area #FCBlive #ElClásico

42: Dani Alves blazes a spectacular effort just over the bar from the edge of the box #FCBlive #ElClásico

Madrid make their most dangerous move of the match so far, as Cristiano Ronaldo used his skill to create space and ripped a shot that was punched out by Bravo.

25' @Cristiano forces a good save from Bravo with a left-footed shot from inside the box.#RMClasico #RMLiga #HalaMadrid

Camp Nou erupts as Ramos takes a shot at Messi in the penalty area. Ramos looked to have completely missed the ball, but there was no whistle as Messi fell to the turf.

Keylor Navas comes up huge for Madrid, saving a low strike by Rakitic. It’s been mostly Barcelona in the opening minutes, but Madrid have shown their willingness to play the counter and strike quickly.

19: Great save from Navas to deny Rakitic from the edge of the box #FCBlive #ElClásico

Suarez whiffs hard on a sure goal, and we’re still scoreless after ten minutes. Neymar made the final move toward goal, and sent it across the keeper to a wide-open Suarez, but Barca’s leading scorer kicked nothing but air. Suarez even fought through a tough challenge from Sergio Ramos to charge into the box, and Ramos was shown a yellow card after the play.

An emotional tribute to Johan Cruyff at Camp Nou before today’s match. Over 90,000 cards combined to form “Gracies, Johan” and his number 14.

Barcelona hope to reach 40 matches unbeaten in emphatic fashion when they host hated rival Real Madrid today at Camp Nou. Barcelona have all but wrapped up La Liga, but this match is about more than the standings. Yes, Madrid are ten points behind Los Blaugranes for the league lead, but Los Blancos will want to avenge a 4-0 defeat in the teams’ first meeting back in November. That embarassing loss spelled the end for Rafael Benitez, who was sacked just two months later without finishing a full year on the job.

Zinedine Zidane hasn’t shaken the Earth in his 15 games as Madrid manager, but he has the team moving in the right direction. They’ve been excellent at home under his watch, but today will likely be his toughest test to date. Zidane himself played in 11 matches against Barcelona, scoring three goals and beating them four times in his playing career.

Look out for a pregame tribute to Johan Cruyff, the Dutch football legend who passed away last week. Barcelona players will also wear a special jersey today, one that has the words “Gracies Johan” front and center.

Kickoff is scheduled for 2:30 p.m. Eastern. Come here once the match starts for constant updates, along with video highlights of every goal. 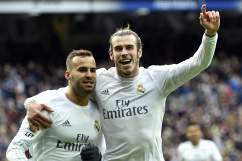 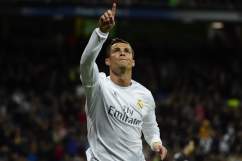