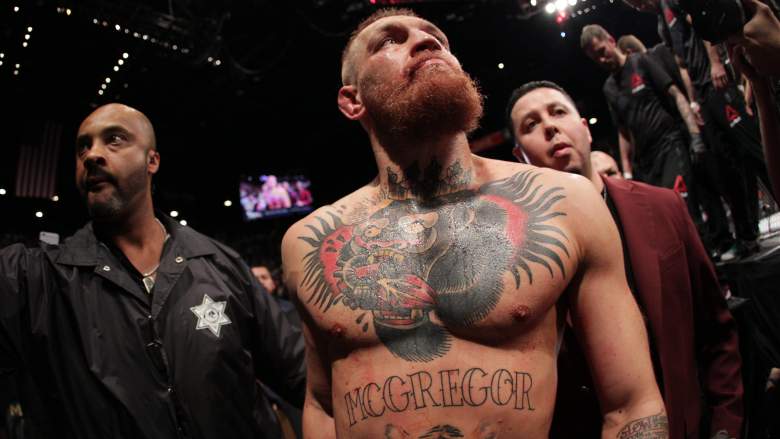 Just two days after shocking the sports world with a single tweet, “The Notorious” took to Facebook on Thursday to confirm that he isn’t retired and is “ready to go for UFC 200.”

Dana White and the UFC have already removed McGregor from his headlining fight against Nate Diaz, and according to sources cited by TMZ, the 27-year-old Irishman won’t be returning to the card.

And thus, we stand at an interesting crossroads. The UFC wants McGregor to promote his fights. McGregor, as he explained in his Facebook statement, is tired of the endless promoting getting in the way of his training.

So, what happens next? Does White stick to his guns and leave McGregor off the UFC 200 card? It seems like a dangerous business move, as McGregor, possibly with the exception of Ronda Rousey, is the biggest draw in the sport right now, and a rematch against Diaz at one of the biggest events in UFC history would bring in absolutely massive numbers. Moreover, even if McGregor doesn’t want to do official promotional events, he still promotes the fight in his own ways. His “retirement” tweet got 170,000 retweets, while his Facebook post, at the time of writing this, had 361,000 “reactions,” 143,000 shares and 71,000 comments.

Many in the MMA community seem split on the standoff:

If UFC folds then it's sets a precedent for future stars to do the same , short term gain $$$ Long term disaster .. Let's see what happens

Conor McGregor is right. He has promoted harder — and better — than any UFC fighter ever. This is a fascinating crossroads we're watching.

UFC played their cards wrong. They look like idiots under all outcomes now.

Conor McGregor complains about the UFC 200 PR schedule but says 'I am not yet paid to promote'. So does he want a lighter schedule or $$$?

Ultimately, money tends to talk, and McGregor headlining UFC 200 equals a lot of money for Dana White and Co. It’s difficult to imagine him not returning to the card, but for now it’s unclear if that will happen.

If McGregor remains off the UFC 200 card, it’s hard to project what will be next for him, as it depends on what happens with Diaz, Jose Aldo, Frankie Edgar and Rafael dos Anjos, who are all fighting on UFC 200 weekend.

Returning to featherweight and taking on the winner of Aldo and Edgar makes plenty of sense, but there’s clearly lots of development left in this scenario.

Read More
Conor McGregor, UFC
Conor McGregor is back and ready to go. Will he get to fight Nate Diaz at UFC 200, or will he have to wait his turn?