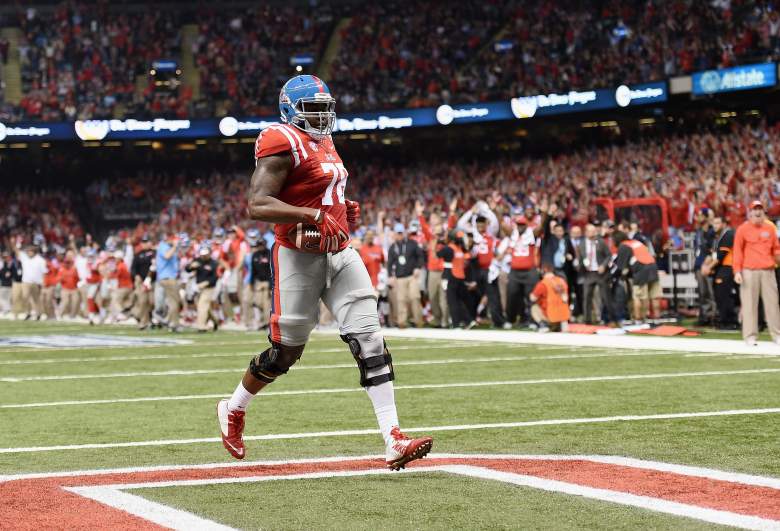 Ole Miss left tackle Laremy Tunsil, once thought to be the top NFL Draft pick, fell all the way to the Miami Dolphins with the 13th pick. A video surfaced right before the draft began of a person believed to be Tunsil smoking out of a gas mask:

The video was sent out from Tunsil’s Twitter account and was quickly deleted. Earlier in the week, he was sued by his step-father for an altercation that occurred last year.

After the incident, Tunsil said he was defending his mother from his step-father. The following in an excerpt from the lawsuit that was obtained by The Clarion-Ledger:

Defendant Tunsil pushed Mr. Miller against the wall in the hallway, causing him to fall. The disabled Navy combat veteran was simply unable to protect himself from the unprovoked assault by the six-foot-five-inch, 305-pound, powerfully-strong offensive tackle.

After Defendant Tunsil had completely overpowered the now-helpless Mr. Miller, the All-American offensive lineman pounded the disabled American veteran severely, striking him with his fists multiple times. It took approximately four men to pull Defendant Tunsil from him,” the report says according to The Clarion-Ledger.

According to Adam Schefter, the combination of the video and other off-field concerns is causing him to fall in the draft. He was with teammate Robert Nkemdiche when he fell out of an Atlanta hotel room.

NFL Network’s Ian Rapoport reported that the video is as many as five years old, and he passed every drug test at Ole Miss.

Here’s some of the reaction on Tunsil’s fall from around the league:

Ravens took Tunsil OFF their board after that video, member of organization tells me. OFF.

Feel some sympathy for Tunsil. Terrible decision to be video'ed, but someone has to hate your existence to post it 10 mins before the draft.

Social media was the star of Selection Sunday… Now of Draft Day. Can't wait until the election #Tunsil