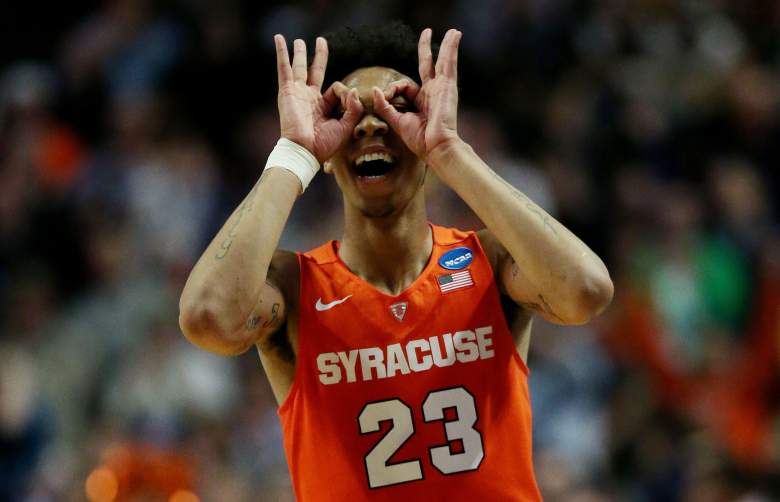 Syracuse is on a roll, but the Orange need another upset to keep their Cinderella season alive. (Getty)

North Carolina is the only No. 1 seed left standing. Syracuse is the first No. 10 seed to make the Final Four.

Now these two ACC foes face off in the Final Four on Saturday night, each squad desperate to keep their respective seasons alive.

It’s an interesting matchup of teams with two distinctly different styles of play. North Carolina’s offense has been on a roll throughout March and the fast-paced Tar Heels can get up and down the court quicker than just about anyone in the country. On the other hand, Syracuse’s zone has once again been its defining feature this season, but the Orange have also found some serious success with a full-court press during the Tournament.

Read on for a complete breakdown of the Final Four matchup, including a look at the odds breakdown and livestream options:

Game Preview: Is it possible? Could Syracuse make it to the National Championship game?

Well, first, the Orange will have to notch another upset. And find a way to slow down North Carolina’s impressive offense.

So, who has the edge? You’ve got to give it to the Tar Heels – at least before the game starts.

UNC’s offensive firepower includes All-American Brice Johnson who is averaging 21 points and shooting 63 percent during the tournament. Not to mention Marcus Paige, Joel Berry II and a collective 48.2 field goal percentage this season.

The key however isn’t jump shots. They key for the Tar Heels is to get the ball inside, to find the holes in Syracuse’s zone and, most importantly, limit turnovers.

So far, that gameplan has proved difficult against the Orange. Syracuse has given up 23 points in the paint throughout the entire tournament and allowed just 17 fast break points in four games.

Still, if UNC is going to keep playing, the Tar Heels can’t focus on that. They need to focus on committing to their own gameplan and, most importantly, breaking down that zone.