The first round of the 2016 NFL Draft was full of surprises. The biggest one not involving a hacked Twitter account may have come from the Broncos, who snuck up five spots in the first round to take QB Paxton Lynch.

All of the feels.

It’s a big win for Denver, who are going into their Super Bowl title defense without a definitive starting quarterback. Peyton Manning has retired, and Brock Osweiler has moved on the Houston Texans. They still have arguably the league’s best defense, and that’s what carried them for most of last year’s Super Bowl run.

The Broncos swapped draft places with the Seahawks to obtain the pick. Denver also traded a third-round pick to Seattle, or 94th overall. The Broncos still have the 98th overall pick.

At 6-foot-7 with scrambling ability, Jon Gruden compared Lynch to Cam Newton during ESPN’s draft coverage. He’s got the physical assets, but Lynch is far from ready for Denver’s opening night debut against Carolina next season. The former Memphis QB put up gaudy numbers inside his conference, but struggled in his college finale against Auburn.

The Broncos were reported to be interested in trading for Sam Bradford, but it appears that ship has sailed. So far, the Broncos will take three quarterbacks into training camp: Paxton Lynch, Trevor Siemian and Mark Sanchez.

Those three don’t exactly inspire confidence, so it’s not totally out of the question for Lynch to start. But it could be a rough road early, and he certainly won’t be putting up fantasy-worthy numbers. Gary Kubiak never had a solid QB during his eight seasons in Houston, so he knows how to prepare an inexperienced passer. 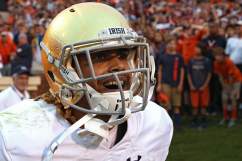