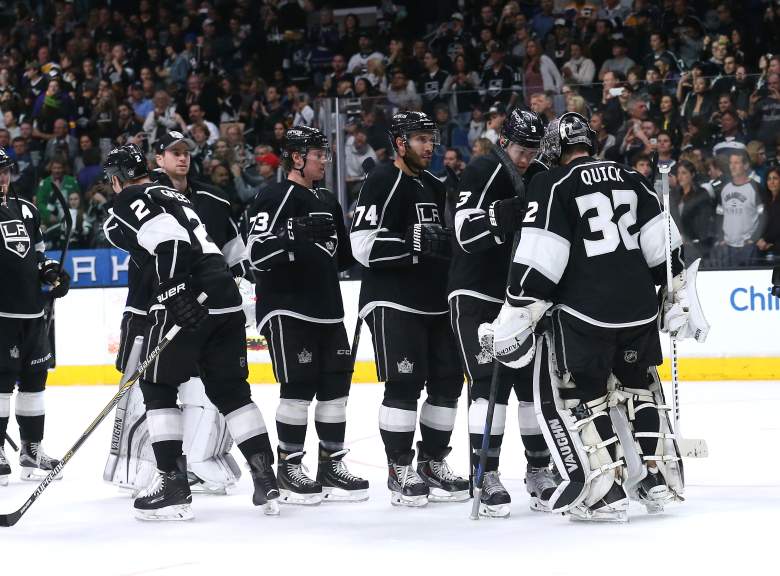 The Los Angeles Kings might be looking at a must-win game at home on Saturday night. (Getty)

The Los Angeles Kings are starting to feel a sense of urgency.

Sure, only one game has passed in the Western Conference quarterfinals, but the Kings were more than a bit stunned by a 4-3 loss at home to the San Jose Sharks and Los Angeles simply can’t afford to drop into a two-game hole early on.

So, can the Kings get back on track?

Of course, but it won’t be easy. Los Angeles may be playing without one of its key defenseman on Saturday afternoon and the Kings are taking on a Sharks squad whose collective confidence is straight through the roof of the Staples Center.

Here’s everything you need to know about Game 2 of the Pacific Division rivalry matchup and what’s at stake in this postseason tilt:

Preview: The Kings are facing another bump in their early-playoff road tonight.

Los Angeles could be playing Game 2 without defenseman Alec Martinez after he left Game 1 late in the second period when he blocked a shot by San Jose forward Patrick Marleau. Martinez also missed the final four games of the regular season and wasn’t on the ice for optional skate on Friday.

Keep an eye out on Jamie McBain who will likely take over for Martinez if he can’t go. It’s a role McBain is used to; he did the same during the final stretch of the regular season as well. The Kings also recalled defenseman Kevin Gravel from the AHL.

Of course, this is a major game for the Kings. A two-game hole is difficult enough to climb out of in any situation, but a two-game hole at home is riding fairly close to a playoff death sentence.

Add into the mix that the Sharks have an NHL-best 28-10-3 road record and three victories in Los Angeles and it won’t be easy for the Kings.

Read More
Hockey, NHL
San Jose stunned Los Angeles a bit in Game 1 and now look to jump out to to a two-game lead in the series. Here's everything you need to know.