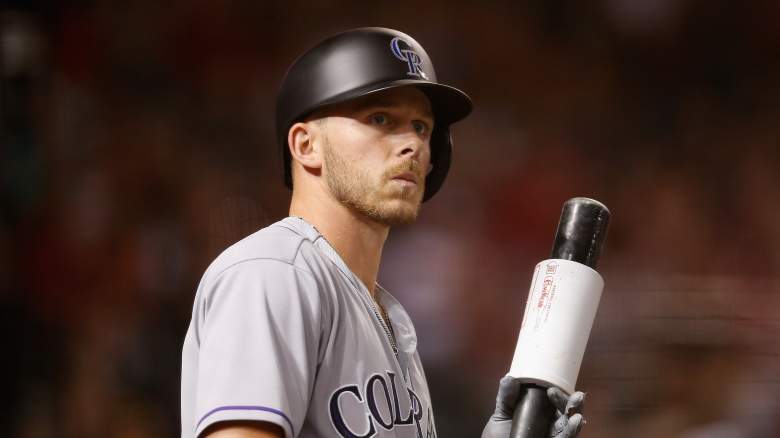 The Major League Baseball season has just begun and the biggest story so far is a guy named Story.

All Story has done is slug four home runs over the first three MLB games of his career. What’s happening here? And should we fantasy baseball owners be paying attention?

Yes, you absolutely need to be paying attention.

If you have daily transactions, I’d just pick him up right now. When a guy is raking like this, it indicates he’s seeing the ball well. That’s what fantasy baseball is all about — stats. And Story is putting them up. So, yes, I’d certainly add him if he’s available in your league.

While he wasn’t big-time home run hitter in the minors (though he did smack 20 and 18 in two separate seasons), Story has a couple of things in his favor right now. 1) He did hit 6 home runs in 53 spring training at-bats, and 2) Half of his games will be played in the thin air of Coors Field.

First off, let’s just throw out the notion that Story will keep this home run pace up. Not going to happen. He’s had barely a dozen at-bats at the major league level. And while he is knocking the ball out of the park, Story has also shown holes at the plate. He has struck out just as many times as he’s homered. Story swings the bat as evidenced by his lack of walks taken.

Is it possible he could hit 20 home runs on the season? Sure, it is. Especially playing 81 games at Coors. And click the link below to see his minors numbers — the guy can swipe some bags, too.

Bottom line is Story is no Troy Tulowitzki, the former Rockies stud SS. Not to say Story can’t become Tulo eventually. He definitely showed the tools and promise to be a productive fantasy contributor one day. But he’s a rookie and there will be slumps along the way when opposing pitchers begin to figure out his weaknesses.

But as for Story’s fantasy outlook and value right now, he certainly needs to be in lineups. Ride this hot streak. Just be ready for the inevitable crashing back to earth.

Check out season blast No. 4 on the season below:

With this blast, @Tstory2 becomes the FIRST player in history to homer in each of his 1st 3 @MLB games. pic.twitter.com/iMXqVeINXz

By the way, the four home runs through the first three games is the most in the MLB since 1900. ESPN Stats & Info says so:

Trevor Story’s first-inning HR for @Rockies gave him the most in a player’s first three career games since 1900. pic.twitter.com/BqCB1VMtlr