Manchester United earned Wednesday’s FA Cup quarterfinal replay at Upton Park thank to a late equalizer from Anthony Martial. This time the French teenager should have some company up front, as Wayne Rooney is expected to return to the lineup for the first time since February.

Rooney’s return comes at a perfect time, as United have once again struggled to score. They mustered just one shot on goal over the weekend against Tottenham, in a loss that kept them four points behind City to qualify for Champions League next season. West Ham are chasing the Reds in both competitions, as the Hammers are in the FA Cup quarterfinals for the first time since 2011 and not about to quit. While LVG’s offense is struggling, Andy Carroll is fresh off his best appearance of the season, notching a hat-trick against Arsenal. 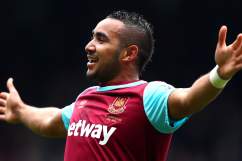