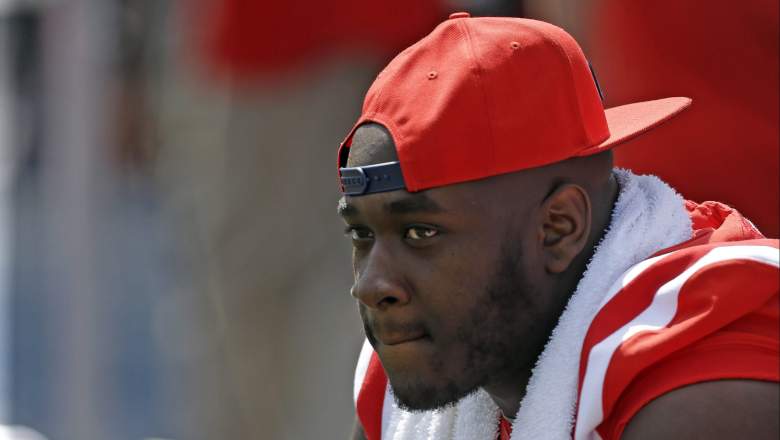 Tunsil sits out during the 2015 Ole Miss-UT Martin game. (Getty)

Laremy Tunsil, once considered the top prospect in the 2016 NFL Draft, fell to 13th after a video released from his Twitter Tunsil smoking marijuana from a gas mask. While Tunsil’s agent insisted the account was hacked, it was far from Tunsil’s first run-in with trouble. From impermissible benefits issues to legal action, Tunsil has seemingly been a

Here’s a look at the trouble Tunsil’s found himself in:

Ole Miss defensive end Robert Nkemdiche, himself considered a top draft prospect, similarly saw his stock crater following hospitalization for a bizarre drug-fueled incident that saw him fall from a fourth-story hotel window. During interviews related to the incident, Nkemdiche casually mentioned “Laremy” being present for the occasion.

While Tunsil had previously been linked to the impermissible benefits listed above, he had not been linked to substance abuse issues before the Nkemdiche incident. Tunsil, for his part, defended Nkemdiche, calling him a “great guy” who simply had “some hiccups.”

Just days before Draft Day, Tunsil was hit with a lawsuit by Miller, his stepfather. Miller alleges a physical attack in June 2015 and subsequent defamation of character by Tunsil against Miller. The suit was filed in Starkville, coincidentally the home of Ole Miss’s archrival Mississippi State.

The lawsuit caps a long-running civil and criminal feud between the two men. Both filed domestic violence charges against one another, with Tunsil claiming that the incident Miller names in filing charges and suing was provoked by Miller attacking his mother. Both sides dropped charges in August 2015.

On Draft Day, Tunsil’s Twitter account posted and then quickly deleted a video showing an African-American male smoking from a bong attached to a gas mask.

Tunsil, through an attorney, claimed that the account was hacked but admitted the video depicted him. The timing of the incident almost certainly played a part in his fall from a possible first pick to 13th.

Tunsil vowed following his selection to show everyone “what a great person I am:”

It was a mistake. It happened years ago. Somebody hacked my Twitter account. Like I said, I’m going to show everybody what a great person I am.