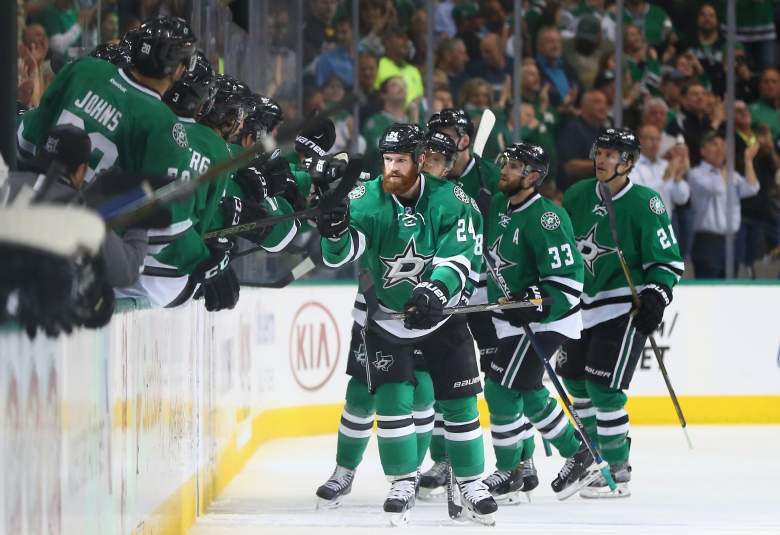 The Dallas Stars offense has been close to unstoppable this season, but is it playoff-ready? (Getty)

That, of course, is easier said than done when you haven’t really been here before. For the Dallas Stars, a team that has made the playoffs just twice in the last eight years, this season’s No. 1 seed is an unexpected position to be in, but that doesn’t mean the team isn’t confident.

In fact, the Stars are planning on being in this one for the long haul, getting it all started in Game 1 of the Western Conference quarterfinals.

So, sure, Dallas hasn’t really been here before, but that doesn’t mean the Stars aren’t ready for a postseaon battle with the Minnesota Wild. Read on for a complete look at tonight’s opener, including an odds outlook and live streaming options:

After being eliminated by the Anaheim Ducks in the first round of the NHL playoffs two seasons ago, the Stars are making their return to the postseason as the top seed, buoyed by one of the top scoring lines in the entire league.

“The enjoyment is coming to the rink and knowing that we’re one of the teams that’s still playing and you’ve got to wrap your arms around it,” Dallas coach Lindy Ruff told NHL.com. “There’s going to be some ups and downs in the playoffs, but this is a lot better feeling than standing here last year at this time and explaining why we didn’t make it.”

The Stars were already feeling pretty confident heading into the series against Minnesota, which more or less stumbled its way into the posteason, but Dallas will still be without one of its biggest stars after Tyler Seguin was officially ruled out of Game 1.

Seguin missed the final 10 games of the regular season with an Achilles injury, but the star made a quick recovery, determined to join his teammates as quickly as possible in the playoffs. Although he won’t be on the ice on Thursday, Seguin is expected to return for Game 2.

Read More
Hockey, NHL
The Dallas Stars may be the No. 1 seed in the Western Conference, but it's not a spot they're particularly used to. Here's everything you need to know about Game 1.