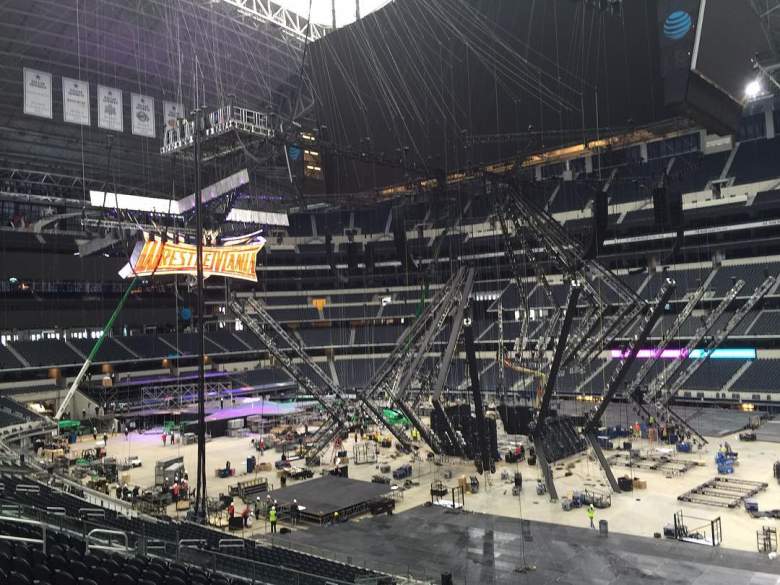 The stage is being set, literally, for a jam-packed WrestleMania on Sunday. (Instagram)

WrestleMania 32 rolls into AT&T Stadium in Arlington, Texas on Sunday with one of the most jam-packed cards in recent history.

In some cases that makes it all a bit more exciting, but it’s a fine line to walk. Luckily, we’re here to break down all the major matches, via OddsShark, including who’s favored in the ring and in the WWE’s writing:

They’ve been beating up on each other for weeks on RAW, pulling each other out of moving cars and throwing TVs at each other’s faces, so it seems like a fairly safe bet that this one is going to be good.

The WWE has been building up Roman Reigns for months, partly because of the serious injury problem on the roster, but viewers probably shouldn’t expect the company to just abandon that plan; despite the boos. Reigns is probably going to get his belt back.

Shane McMahon vs. The Undertaker

Surprisingly enough, this  might be the closest match on the card on Sunday. It appears that once Shane McMahon threw his body off the top rope on RAW on Monday, things started to change in his favor.

That being said, can Undertaker lose at WrestleMania again? Probably not. At least we wouldn’t bet on it.

Dean Ambrose has gotten some support from other hardcore legends heading into this anything goes match and that alone could help swing the outcome in his favor. He’s a small underdog right now, but don’t be surprised if he pulls this off and, by extension, so do you.

The seven-man ladder match for the Intercontinental Championship seems more a bit like chaos than an actual competition. But – but! – if you think that any of these other wrestlers pose a threat to Kevin Owens, most likely Sami Zayn, this one isn’t a bad bet. There’s some serious value here.

Sasha Banks comes into the three-way match as the heavy favorite and for good reason. Fans love her, she’s got a fun-to-watch attitude in the ring and a perfect motive for the revenge storyline to defeat Charlotte.

Speaking of chaos, this one is a bit of a mess. As of April 1, everyone who might be somehow involved in the bout was plus-money, but it isn’t easy to predict a winner when the ring is filled with dozens of competitors.

Read More
WWE
Who gets the WWE World Heavyweight Title? What about the Intercontinental Championship? Or the Divas belt? We've got the odds for each and every WrestleMania match.