Donnovan Hill, who was paralyzed in a Pop Warner football game when he was 13, died Wednesday.

According to his mother, Crystal Dixon, Hill died due to complications from a Tuesday surgery.

1. Hill Was Paralyzed in 2011 After Making a Head-First Tackle

Damn just got the news @hill_donnovan passed away after complications from a surgery…WE must find a cure for this injury. Damn man RIP

Hill was Pop Warner football player in Lakewood, California, which is near Los Angeles.

In 2011, his team was playing in a regional Pop Warner championship game.

Hill, 13 at the time, made a tackle at the goal line, but suffered his injury on the play.

From the ESPN.com story:

A two-way star for his Lakewood, California, program, Hill came up from his safety position to try to stop a ball carrier at the goal line. The running back went low and led with his head, as did Hill. The collision snapped Hill’s neck.

2. He Recently Won a Lawsuit Against Pop Warner After Alleging the Coaches Taught the Players the Tackling Technique

Hill used a headfirst tackle, a technique he said he was taught by his coaches.

While the exact amount of the settlement isn’t known, it is in seven figures.

Hill and his mother had moved out of their apartment last month as they thought they would be receiving the settlement money. Dixon said she hasn’t received any of the money yet. 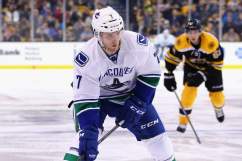 3. Hill Died During After a Routine Surgery

Hill was scheduled to undergo a routine surgery on Tuesday.

The procedure was to clean a skin graft.

Dixon was told the doctor performing the surgery accidentally cut an artery, leading to blood loss, causing Hill to slip into a coma.

The hospital has yet to release details of his death.

4. It Was Later Found Out Hill Had a Heightened Risk of Paralysis

Hill had a congenital narrowing of the bones in his neck, thus he was more susceptible to getting paralyzed.

This, though, was unknown until after Hill suffered his injury.

5. ESPN Had Done an Outside the Lines Segment on Hill

Remembering Donnovan Hill, who passed away today. Hill was paralyzed 5 years ago in a Pop Warner game. https://t.co/OKhtxUFGxx

ESPN did a feature on Hill and the lawsuit in 2013. You can see it in the tweet above.

Hill said he taught the tackling technique by his coaches and the players were punished if they didn’t use that method when taking down a ball carrier.

Hernandez said he didn’t encourage the technique, while Martinez argued for that method.