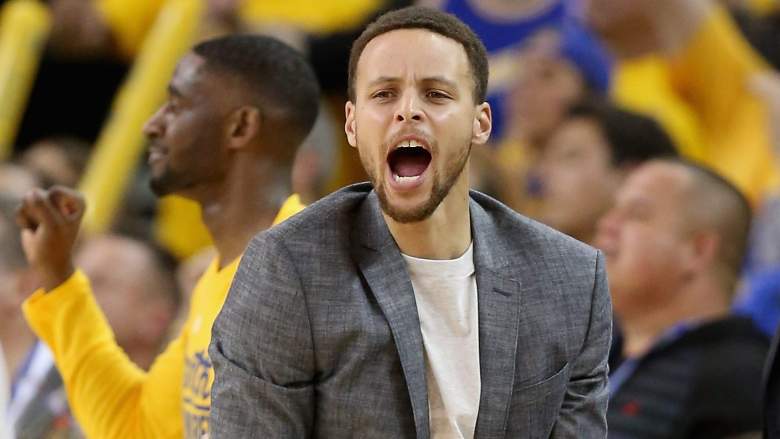 Steph Curry has been in street clothes for three straight games. When will he return? (Getty)

The Golden State Warriors have fared well without soon-to-be two-time MVP Steph Curry, going 4-1 in his absence during the NBA playoffs thus far, but that doesn’t mean they aren’t itching to get him back in the lineup.

But with a 2-0 series lead over the Portland Trail Blazers, they won’t be rushing him back, either.

Curry, who is recovering from a Grade 1 sprain in his right knee, is doubtful for Game 3, per Steve Kerr:

Curry has been ruled out for Game 3, while a return for Game 4 is still a possibility:

Steve Kerr on Steph Curry playing again: "No way tomorrow. I would say maybe a slight chance on Monday if he gets great work in." @dpshow

After receiving a platelet-rich plasma (PRP) treatment, though, he appears to be nearing a return.

Warriors GM Bob Myers recently stated that Game 4 is a possibility for Curry’s return, although he noted the sharpshooting point guard would have to get in some more basketball-related activity before the conversation is furthered:

He’s got to play a little bit of 3-on-3 or 5-on-5. He hasn’t done any of that stuff yet, and I just think until you are actually trending towards playing basketball, it’s hard to speculate as to what the date will be. If he’s able to do that before Saturday, then you see where you’re at.

But you don’t really know until you start pushing the envelope as far as basketball activities, and he’s not doing that stuff yet. Can that stuff be done in the next few days? I suppose.

Ultimately, with a commanding series lead, the Dubs have no need to hurry back their superstar. A loss could quickly change that thinking, or they may want to get him back in time to shake the rust off before the Western Conference finals, but when have someone as important as Curry, patience is key.

Game 4, which is on Monday, seems like a decent projection, although it wouldn’t be surprising if that got pushed back.

Read More
Golden State Warriors, NBA, Steph Curry
Steph Curry is about two weeks into an original three-week diagnosis, but he's already nearing a return. When will he makes his way back onto the court?