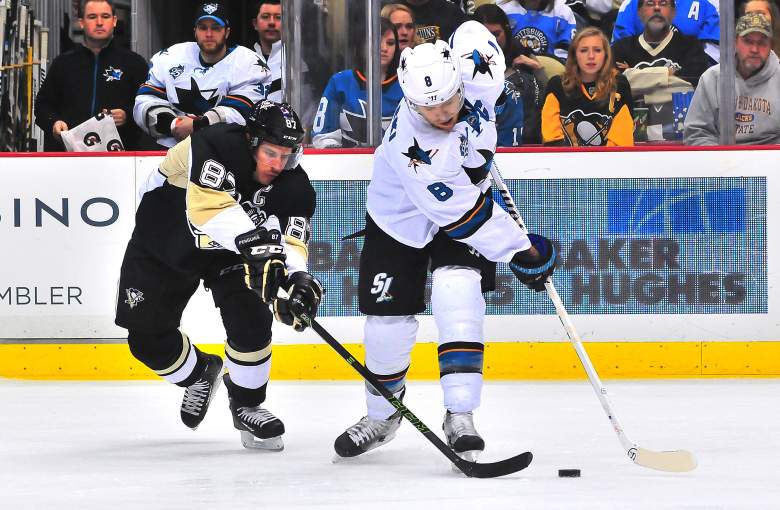 Penguins’ Sidney Crosby reaches for the puck with Sharks’ Joe Pavelski during a game in 2015. (Getty)

The stage is set for the 2016 Stanley Cup Final. The San Jose Sharks will face the Pittsburgh Penguins for Game 1 at the Consol Energy Center Monday night.

The Sharks will play in the Cup final for the first time in the team’s 25-year history while the Penguins make their fifth final appearance and, first in seven years.

Marleau has been in San Jose since he was selected by the Sharks as the second overall pick in the 1997 NHL Draft. He’s played 165 games in the Stanley Cup Playoffs, but never in the final.

Thornton, who arrived in 2005 when the Boston Bruins traded him midseason has also never played in a Stanley Cup Final in his 18-year NHL career.

Sharks captain Joe Pavelski will be a another player to watch in Game 1. Pavelski has been a man on a mission this postseason, with a career-best 13 playoff goals.

Logan Couture (24 points), Pavelski (22 points) and Brent Burns (20 points) have displayed speed and grit as they lead the Sharks’ offense in points.

Pittsburgh poses a daunting challenge as well. The combination of Sidney Crosby and Evgeni Malkin make the Penguins one of the most dangerous teams in the league.

The two have combined for 10 goals, 20 assists and 30 points this postseason.

While Crosby and Malkin each have 15 points, the Penguins’ leading postseason scorer is Phil Kessel with nine goals and 18 points. 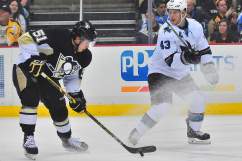 Sharks vs. Penguins Live Stream: How to Watch Game 1 Online