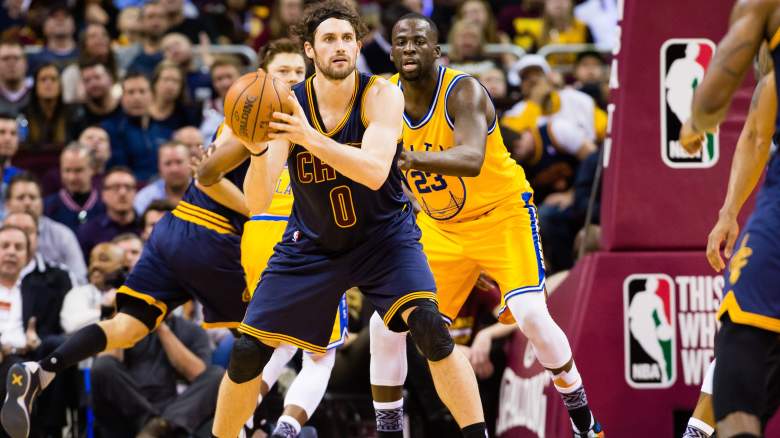 CLEVELAND, OH – JANUARY 18: Kevin Love #0 of the Cleveland Cavaliers looks to pass while under pressure from Draymond Green #23 of the Golden State Warriors during the first half at Quicken Loans Arena on January 18, 2016 in Cleveland, Ohio. NOTE TO USER: User expressly acknowledges and agrees that, by downloading and/or using this photograph, user is consenting to the terms and conditions of the Getty Images License Agreement. Mandatory copyright notice. (Photo by Jason Miller/Getty Images)

On May 24, the Golden State Warriors were on the brink of elimination, thought to have very little chance of coming back from a 3-1 series deficit against the Oklahoma City Thunder.

Now, just over a week later, they’re big favorites in Game 1 of the NBA finals against the Cleveland Cavaliers, a team that has looked absolutely dominant for most of the postseason.

How quickly things can change.

Here’s a look at all the betting information you need to know, along with a prediction for Thursday’s series opener:

The Cavs have shot the lights out during the postseason, burying 14.4 threes per game at a 43.4 percent clip. Both of those numbers are better than the Dubs (12.5, 40.3), who are one of the most prolific three-point shooting teams in NBA history.

Still, this game may instead hinge on Cleveland’s defense.

Tyronn Lue’s squad is allowing 102.9 points per 100 possessions, a fairly middle-of-the-road number that won’t get it done against Golden State’s explosive offensive attack.

Moreover, Cleveland’s most-used lineup during this postseason has been Kyrie Irving, JR Smith, LeBron James, Kevin Love and Tristan Thompson. That’s something the Warriors’ small-ball lineup can take advantage of, as Love and Thompson don’t quite have the lateral quickness to guard guys like Harrison Barnes, Andre Iguodala or Draymond Green on the perimeter.

Ultimately, Golden State has the pieces offensively to give Cleveland fits. And on the other side of the ball, seven games of dealing with Russell Westbrook, Kevin Durant and Serge Ibaka should have the Dubs more than prepared for Irving, James and Love.

Cleveland’s shooting will keep it close, but the Warriors take an early series lead.

Prediction: Warriors 105, Cavaliers 101 (Warriors straight up, Cavaliers against the spread, Under 210)

Read More
Cleveland Cavaliers, Golden State Warriors, NBA
The Warriors and Cavs begin their NBA Finals rematch on Thursday. We've got all the betting information, plus a prediction and pick against the spread.