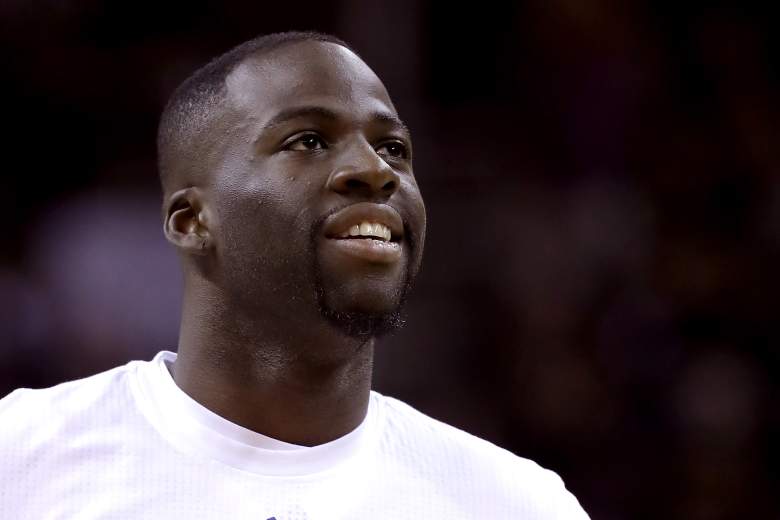 Golden State Warriors forward Draymond Green, 27, has become an NBA All Star and now a household name. He is currently playing in the NBA Finals with his team, trying to beat the Cleveland Cavaliers. The Warriors currently lead the series 3-1.

The 6’7″ athlete has played for the Warriors since 2012. He has the support of his family, especially his mom, Mary Babers-Green, who has been cheering him on since day one.

Time has ready been moving..4 years ago! Imagine that! pic.twitter.com/66ILDFt3aL

Babers-Green is a middle school campus supervisor in Saginaw, Michigan. After splitting from Raymond Green, Draymond’s mother raised her three children as a single parent.

“They had curfew, stuff like that. I was pretty strict at times,” she told SF Gate back in 2015. She spoke about one time in particular when Draymond cheated on a science test in the ninth grade.

“I had to stick to my guns. If he struggled, it would come back on me. School was more important than basketball. No one wants to deal with a dumb athlete. He was big, black, and a man. That’s three strikes against him,” she said.

Babers-Green is very supportive of her son and has been known to tweet during his games. She has over 23,000 followers on Twitter. Her energetic tone on social media was so vocal it even led Draymond to delete his mom’s account.

“He deleted it. He said ‘you have no chill, you can’t get on here, you’ll say the first thing’s that come to your mind,'” she told the media in June 2015.

Babers-Green has been at it through the NBA Finals, but seems to have calmed down over the years. However, she’s till not afraid to call anyone out.

Draymond’s biological father is Wallace Davis, but he took his step-father’s last name. Raymond Green and Draymond’s mother got a divorce when Draymond was 12.

Draymond’s older brother, Torrian Harris, played college basketball for Nebraska-Omaha from 2009 to 2011 and was named to MIAA All-Defensive Team. His other brother is Braylon Green. His three sisters are LaToya Barbers, Jordan Davis, and Gabby Davis.

In 2015, Green opened up about growing up in Saginaw with his brothers and sisters.

“Well I’m from Saginaw, Michigan, you know? I know what hard times are like. I didn’t grow up with a silver spoon in my mouth. I’ve had struggles. I remember times when our lights and our water got cut off. I remember when our house was foreclosed on. And I remember that when all that was going on, my mom couldn’t afford Christmas presents. I remember those times when it wasn’t Draymond Green who signed an $82 million contract. So to be in a position to help other families out to have a good Christmas, it means a lot to me. Everybody deserves a chance, everybody deserves to have those special moments with their family members. I like to see smiles on people’s faces, the appreciation that they show. Those are special moments for me,” he told Esquire.

Draymond Green Expecting His First Child – blogged by: @eleven8 – Congratulations are in order for Golden State Warrior star and Team USA Baller, #DraymondGreen, who is expecting his first child. Over the weekend, Green’s longtime girlfriend and college sweetheart, Jelissa Hardy, held a baby shower for the couple’s first child. Hardy is reportedly 8 months pregnant, so she could be ready to give birth very soon. #TheYBF reports that the shower was held at the Claremont Club & Spa inside the Fairmont Hotel in Berkeley, CA. Hardy graduated in 2012 from Michigan State University’s College of Arts and Letters with a Bachelor Degree in English. She also played basketball and ran track but had to stop due to a back injury. Jelissa Hardy has one child from a previous relationship, who Green has been like a father to. Jelissa keeps a generally low profile but she was spotted alongside Draymond Green at the Nickelodeon Kids Choice Sports Awards and was by his side when the Warriors received their Championship trophy in 2015. Congrats to Draymond and Jelissa’s new bundle of joy. Can’t wait to see if the new #BallerBaby is a boy or a girl!

Green met Jelissa Kay Hardy, 28, back in college — the two both attended Michigan State. Hardy graduated with an English degree while Draymond graduated with a communications degree. Like Draymond, she is a former high school basketball player, though she had to leave the sport due to a back injury, according to BET.

Green and Hardy welcomed a child together last year (see below). Hardy also has a daughter, Kyla Dior, from a previous relationship. Green is thought to be very close to Kyla.

Green shares pictures of his son on Instagram every now and then. Fans seem to love to see baby Green growing up — he’s already five months old.