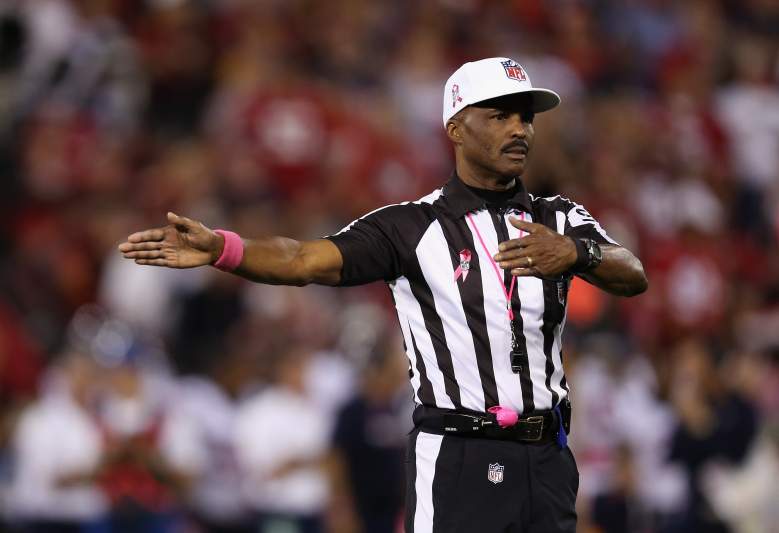 Mike Carey makes a call during the game between the Houston Texans and the San Francisco 49ers in 2013. (Getty)

When CBS kicks off its broadcast for the 2016-17 NFL season, they may be doing so without officiating expert Mike Carey.

Carey is out as CBS’ NFL rules analyst, according to the New York Daily News’ Bob Raissman.

Carey, who spent 24 seasons as an NFL referee, joined CBS two years ago.

His departure would not be shocking, considering that Carey became known for his bungled analysis on replay reviews. Additionally, Carey’s contribution to CBS’ Super Bowl broadcast was minimal, to say the least.

Carey contributed only once to the broadcast, following an incomplete pass from Panthers quarterback Cam Newton to receiver Jerricho Cotchery. Carolina coach Ron Rivera challenged the play and the broadcast was thrown to Carey for analysis.

Before the outcome was announced, Carey gave an incorrect breakdown of the play saying:

“If I was in the booth, I would reverse this to a catch. The ball never hits the ground.”

However, the ruling was upheld because the ball did hit the ground. After the play, Carey was never heard on the broadcast again.

This is one example of many instances where Carey was wrong in his analysis, making him an easy target for a barrage insults on social media.

“I’ve seen some of the criticism, and I think some of it is very hurtful, quite frankly,” McManus told USA Today.

“But Mike is learning his craft and, I think more often than not, he has gotten it right,” McManus said. “But I’ll also say that he has disagreed a number of times in some very high profile situations with what the [replay] officials have come back with. . . .

McManus also said there were times when Carey went too far.

“Mike has perhaps gone out on a limb more than he should in trying to guess or speculate what a call will be, but all he is giving is his opinion of what he would call if he were on the field,” McManus said. “And if it’s a different result, I think people get frustrated. But I think people would understand that Mike is only giving his opinion.”

While former NFL referee, Mike Pereira, who is entering his seventh season as Fox’s rules analyst, has found success in the broadcast industry, the transition for Carey wasn’t so smooth.

Raissman reports that CBS is “highly unlikely” to hire another retired official.