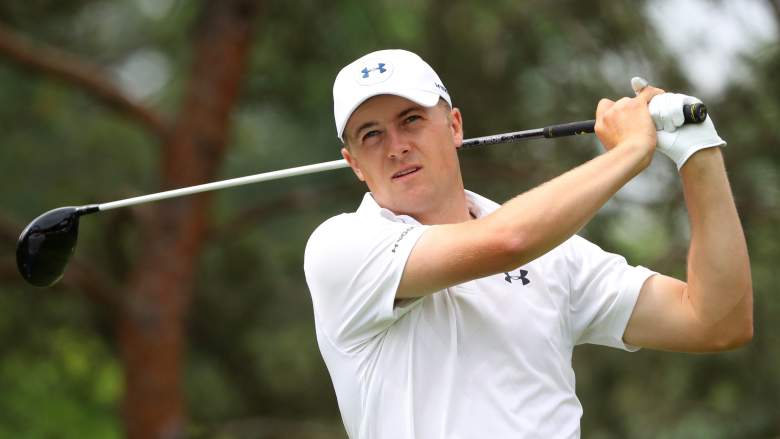 Jordan Spieth has made over $4 million in course earnings this season. (Getty)

At just 22-years-old, Jordan Spieth has been setting records on the golf course and living the life off it.

The Dallas, Texas, native is already a 2-time major champion, the 2013 PGA Tour Rookie of the Year, a FedExCup champion and the Player of the Year (2015).

Spieth is piling up the money from both on-course earnings and endorsement deals, which are aplenty for the marketable 2015 Masters and U.S. Open winner.

So how much does Spieth make?

Here’s what you need to know about Spieth’s net worth:

1. Spieth’s Estimated Net Worth is Believed to be Over $70 Million

How to swing like Masters champ Jordan SpiethJordan Spieth shows "CBS This Morning" co-host Charlie Rose the grip and swing that helped him develop into one of the world's top golfers.2016-03-31T10:02:39.000Z

While we don’t know exactly how much Spieth has in his bank account, a few websites have it approximated at over $70 million.

The majority of Spieth’s income comes from his endorsements, which include Under Armour, AT&T, Coca-Cola and Rolex.

It’s estimated he’s grossed close to $150 million so far, but then things such as taxes, caddie and employee payroll, and other general expenses come into play.

One smart move Spieth has made was to continue to call Texas his home. Texas doesn’t have state income tax.

He’s also been investing since he was 20.

Highlights | Jordan Spieth’s Texas-size win at DEAN & DELUCAIn the final round of the 2016 DEAN & DELUCA Invitational, Jordan Spieth turned on the jets and finished with an incredible birdie spree on the final three holes to earn his eighth title and his first win in his home state. . SUBSCRIBE to PGA TOUR now: http://pgat.us/vBxcZSh Welcome to the official YouTube channel…2016-05-29T22:50:35.000Z

Spieth set a record in on-course earnings in 2015, breaking a mark set by Tiger Woods in 2007.

Spieth pulled in over $22 million, which included the $10M FedEx Cup bonus, to best Woods by a little over $1 million.

Jordan Spieth's incredible marshmallow trick shotPrior to the start of the 2016 AT&T Byron Nelson, Jordan Spieth conducted a kids clinic to educate young players on the game. Wrapping up the clinic with trick shots, Spieth gave the kids a laugh when he was able to hit a shot and catch a marshmallow in his mouth. . SUBSCRIBE to PGA…2016-05-18T18:24:02.000Z

Spieth has not only soared in the World Golf Rankings, but also in the richest athletes poll as well.

According to Forbes, Spieth is No. 9 on the 2016 World’s Highest-Paid Athlete list.

Spieth, one spot behind golfer Phil Mickelson in the rankings, earned $52.8 million. Forbes had Spieth raking in $20.8 million in golf salary and another $32M in endorsements.

The Texan also has the distinction of being the youngest member on the list. He’s younger than Cleveland Cavaliers point guard Kyrie Irving by 16 months.

4. AT&T is One of Spieth’s Sponsors and He’s Appeared in a Commercial

A huge chunk of Spieth’s change comes from his endorsement deals. And the soon-to-be 23-year-old calls some of the biggest names in business his partners.

Spieth’s custom-made golf clubs are from Titleist with grips by SuperStroke, and his on-course outfits are by Under Armour.

He also has sponsorship deals with Coca-Cola, AT&T, Rolex, Perfect Sense, and NetJets helps with all the travelling a PGA Tour pro has to do.

In fact, Spieth starred in an AT&T commercial which aired during the Masters 2016 which also featured his parents, his caddie Michael Greller and Cowboys quarterback Tony Romo. You can check it out above.

Spieth also has a new Coca-Cola commercial airing during the U.S. Open:

Click here to check out all of Spieth’s partners and management team.

In April of 2015, Spieth bought a $2.3 million home in the Preston Hollow neighborhood in Dallas.

Since then he’s upgraded.

Earlier in 2016, Spieth purchased a mansion for about $7.1 million in the same area. The home, which was previously owned by fellow golfer Hunter Mahan, was originally listed at $8.495 million, so it appears Spieth got a great deal.

The new place covers over 16,500 square feet and features a 12-car garage, an Infinity pool and an elevator.

Click here to see pictures of the luxurious home.

Here’s a rundown of some of the home’s amenities:

Read More
5 Fast Facts, Golf, Jordan Spieth, PGA Tour
Jordan Spieth is coming off a record-setting earnings year in 2015 and is off to a lucrative start this season. Click here to see Spieth's net worth.