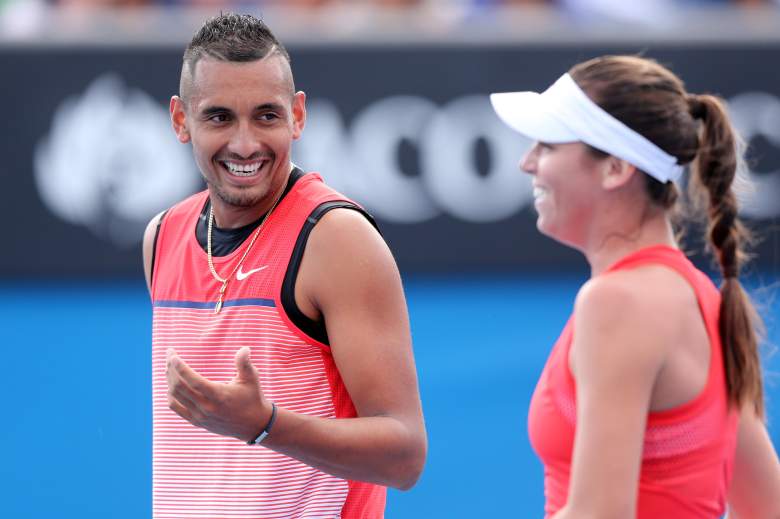 Ajla Tomljanovic and Nick Kyrgios went public with their relationship during the Australian Open.

15th seed Nick Kyrgios beat Radek Stapanek 6-4 6-3 6-7 (9-11) 6-1 in the opening round at Wimbledon. A spectacular between-the-legs lob winner was the highlight of his four-set win as Kyrgios preserved his flawless first-round record at the All England Club on Tuesday.

The 21-year-old Australian has a disregard for rules and fiery temper. However, a new force in his life could bring out a softer side: his girlfriend and fellow tennis pro Ajla Tomljanovic. Tomljanovic, 22, who is Australia’s third-ranked woman won’t be playing at Wimbledon due to a recent shoulder surgery.

Here are five fast facts to know about the couple:

1. For Months They Denied Dating, But Went Public With Their Relationship at the Australian Open

Happy birthday to my boo, hope you have an amazing day ?❤️ See you soon!! @Ajlatom #howluckyami? pic.twitter.com/8IC7E7gFKi

Kyrgios and Tomljanovic put on an affectionate display during the Australian Open, going public with their relationship for the first time.

Flirtations on the court and on social media fueled speculation for months, even though they both insisted it was a friendship, according to the Daily Mail.

2. They Practice Together Frequently & Played in the Australian Open Together 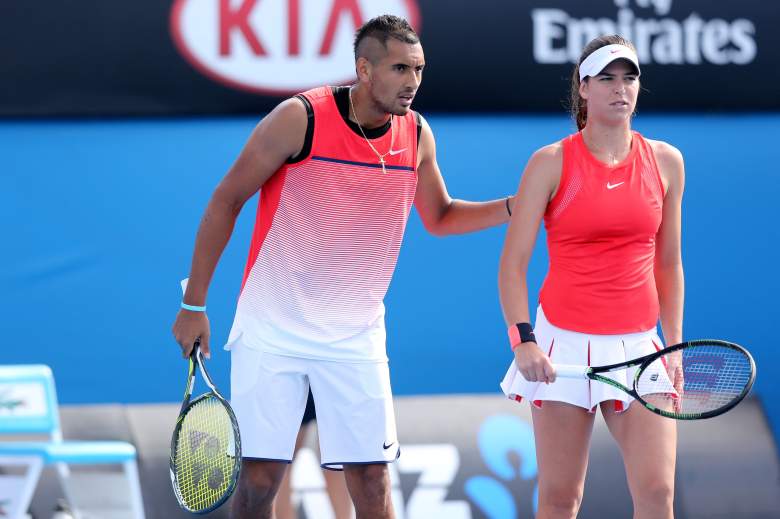 Ajla Tomljanovic and Nick Kyrgios during their first round mixed doubles match during the 2016 Australian Open. (Getty)

The tennis pros confirmed their relationship after playing in the Australian Open mixed doubles together in January during a post-match press conference.

“She told me I was a bit too hard on myself out there. Just being on the court with her, I was in a nice place,” Kyrgios said in a post-match press conference. “We practice a lot together—I know what her tendencies are on court, I know what her strengths are so I know what she likes to do out there. It was easy.”

Tomljanovic said is was fun to play alongside her boyfriend, although she had hoped for a better showing.

“It was definitely a first,” she said. “It was fun but I don’t like losing. So at the end of the day I wish we could have done better.”

There was banter between the pair throughout the match, and they even shared a few laughs.

“To be honest, I thought if we played anyone else we had a chance of winning,” Kyrgios said. “We were one of the better pairings, but it was a tough match-up.”

3. Tomljanovic Was Born in Croatia, but Is Applying for Australian Citizenship

Tomljanovic has won four singles and three doubles titles on the ITF tour in her career. On February 23, 2015, she reached her best singles ranking of world No. 47.

Tomljanovic started playing tennis at a young age and found success early in her career as an accomplished junior player. She won the 2009 Australian Open Girls’ Doubles title with Christina McHale, and reached her combined career high junior ranking of world number 4 on March 30, 2009.

Tomjanovic was born in Croatia and moved to Brisbane in late 2014.

“When I was a kid, it was always the dream to compete with the best girls and be the best I can be,” Tomljanovic told Sports Illustrated. “And with Australia, I really believe I can maybe reach the next level and maximize my potential.”

4. Kyrgios Is Known for Controversial Behavior 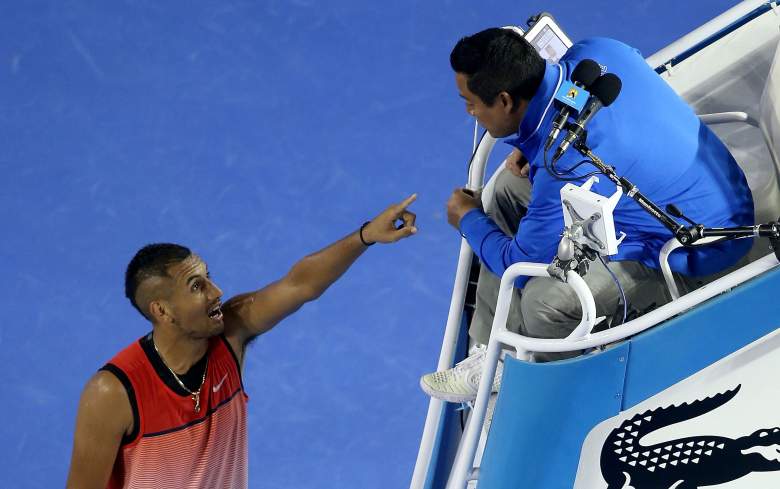 Nick Kyrgios argues with the main chair umpire during the 2016 Australian Open. (Getty)

Kyrgios launched his professional tennis career in 2010, at age 15. He has gained a reputation as a talented player with a growing bad-boy image. Kyrgios is known for his frequent racquet smashes, outbursts and mid-match arguments.

Last year he was given a 28-day ban and was fined by the Association of Tennis Professionals for making comments about Stan Wawrinka’s girlfriend during a match. Television microphones picked up Kyrgios trash talking his opponent.

That incident led tennis officials to suspend Kyrgios and fine him $25,000.

He’s raised eyebrows for other moments on the court. At this year’s Australian Open he answered his phone on the court before a mixed doubles game, which he played with Tomljanovic, a no-no in the world of professional tennis.

During Australia’s Davis Cup quarter-final in July 2015, Kyrgios was heard shouting “I don’t want to be here.”

He was also docked a point while playing Spain’s Albert Ramos at the BNP Paribas Open. Reason? For dropping expletives. “You used the F word,” he was told by the umpire. In another match, he launched an attack on the umpire, saying: “Does it feel good to be up there in that chair? Does it make you feel strong?”

5. Kyrgio Has Indicated His Relationship With Tomljanovic Has Helped His Professional Career

Kyrgio and Tomljanovic frequently post photos and flirtatious messages to one another on social media.

Kyrgios’s Instagram and Twitter profile picture is a photo of the pair together and on Tomljanovic’s bio she states, “legendary couple.”

Kyrgio has even attributed recent on-court success to a “certain someone” we can most likely assume is Tomljanovic.

“I don’t have a coach, but I did get certain tips from a certain someone before the match,” Kyrgios said after defeating world No.2 Andy Murray at this year’s Hopman Cup.

“I’m not going to tell you who that is. Hopefully that can continue to come, and she can keep giving me tips.”