A former NFL cornerback was shot by a homeowner while trying to break into a house in Portland, Oregon, while naked, police say.

The 33-year-old played college football at Stanford University and then was with the Detroit Lions from 2005 to 2007. His father, Stanley Wilson Sr., was also a former NFL player, who battled drug addiction during his career and went AWOL the night before the 1989 Super Bowl while playing for the Cincinnati Bengals. Wilson Sr. is currently serving 22 years in a California prison for burglary, according to ESPN.

The shooting is being investigated by the Multnomah County District Attorney’s Office, and The Oregonian reports that the homeowner, who has not been identified, could be protected by Oregon law that says a person is justified in using “deadly physical force” if another person is trying to burglarize his or her home.

1. Wilson Was Found Naked in a Water Fountain in the Backyard of the Home, Which Is Owned by a Man & Woman in Their 70s

Stanley Wilson II was found naked in a water fountain in the backyard of a home in the 4900 block of Southwest Humphery Boulevard in Southwest Portland, KGW-TV reports.

The home is owned by a man and a woman in their 70s, who have not been identified. The 78-year-old homeowner fired from inside his home, while Wilson was outside, KOIN-TV reports. Wilson was shot in the abdomen. 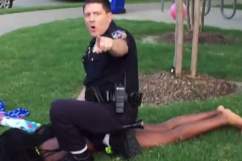 Eric Casebolt Will Not Face Charges in McKinney Pool Incident

2. He Is a Portland Resident & Does Not Appear to Have a Criminal Record

Wilson lives in Portland, according to The Oregonian. He does not appear to have a criminal record in Oregon, the newspaper reports.

He did not make the Lions roster in 2008 and dropped off the radar after the end of his NFL career. 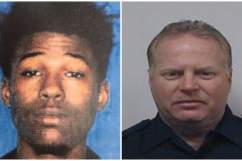 3. He Was Drafted in the Third Round of the 2005 Draft After Playing at Stanford

Wilson was drafted in the third round of the 2005 draft by the Detroit Lions after his Stanford University career, according to the Lions website.

He played four years at Stanford and was a three-year starter, according to the Cardinal website.

Wilson was also a sprinter on the Cardinal track team for four year.

Wilson II recorded 86 tackles during his three-year career with the Detroit Lions, according to NFL.com.

5. His Father, a Running Back, Battled Cocaine Addiction & Was Diagnosed as Bipolar

The elder Stanley Wilson in 1988 while playing for the Cincinnati Bengals. (Getty)

Wilson’s father, Stanley Wilson Sr., was a running back for the Cincinnati Bengals from 1983 to 1988, after playing at Oklahoma. The elder Wilson’s career was hampered by a cocaine addiction, which led to full season suspensions in 1985 and 1987. He is best known for having gone AWOL on the night before the 1989 Super Bowl. He was later found in a hotel bathroom with cocaine and drug paraphernalia.

After being banned from the NFL for life for a third offense, Wilson Sr. was arrested in 1999 on burglary charges in Beverly Hills, California, according to a Cincinnati Enquirer article. He was accused of stealing $130,000 worth of property and was later sentenced to 22 years in prison.

During his trial, his attorneys said the elder Wilson had been diagnosed with bipolar disorder, according to a 1999 Los Angeles Times article.

“He’s still my father, still the man that I’ve always listened to and loved, and I’ve never tried to run away from the name,” Stanley Wilson II told ESPN in the lead up to he 2005 draft. “Some people, they don’t have their father anymore, you know, because he’s passed on. I’m lucky. My father is still alive. Even in his current [circumstances], well, he’s still here. And I’m still the son who looks up to him.