Argentina have had several injuries late in the second half of the Copa America semifinal against USA, but none was scarier then when Ezequiel Lavezzi flipped over the sideline boundary.

Lavezzi was playing a long header from the opposite sideline, and backed up beyond the boundary, falling over. Graham Zusi was the first player to come to check on him, and he immediately called for medical assistance.

The injury appeared to come from breaking his fall. Lavezzi scored the first goal of the match on a floating header after a perfect pass from Lionel Messi. After the match, he was diagnosed with a broken elbow.

Argentina went on to win 4-0, advancing to their second consecutive Copa America final.

The finals of Copa America Centenario will be held at MetLife Stadium on Sunday, June 26 at 8 p.m. Eastern. The loser will go to the third-place match on Saturday. 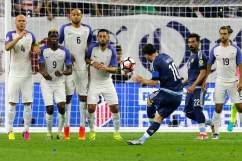