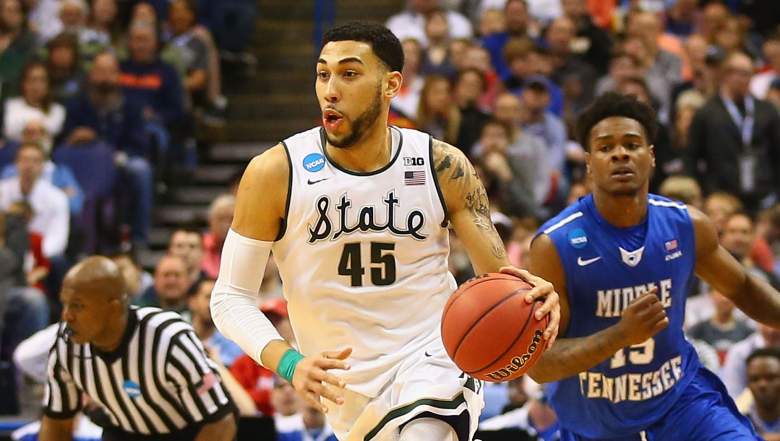 Denzel Valentine out of Michigan State was the Chicago Bulls’ first-round pick in the 2016 NBA Draft. (Getty)

The Chicago Bulls addressed a need in the backcourt Thursday night when they selected Denzel Valentine with the 14th overall pick of the 2016 NBA Draft.

Valentine is a guard out of Michigan State.

Valentine played four years for the Spartans, with career averages of 11.4 points, 5.9 rebounds and 4.4 assists per game.

In the second round with pick No. 48 the Bulls selected Paul Zipser, a 6-foot-8 small forward from Germany. Zipser is 22 and has been playing with FC Bayern Munich.

Here’s what you need to know about Valentine:

Here’s what you need to know about Zipser:

The 2016-17 Bulls are going to have a different look for second-year coach Fred Hoiberg.

Gone is longtime point guard Derrick Rose, who was traded to the New York Knicks days before the NBA Draft. The No. 1 overall pick in the 2008 draft was the NBA’s Rookie of the Year, a 3-time All-Star and the 2011 league MVP.

Likely gone is Joakim Noah, the team’s first-round pick in the 2007 draft. Noah is a free agent who isn’t expected to re-sign with the team. Chicago’s other center, Pau Gasol, is also an unrestricted free agent with a player option for this season. It doesn’t guarantee he’ll stay in the Windy City, though.

The Bulls had two picks in the 2016 NBA Draft. They had the 14th overall pick and the 48th selection in the second round.

Point guard and center are two positions of need for Chicago, especially now with Rose gone and the potential of losing Noah and Gasol.

The Bulls received point guard Jerian Grant from the Knicks as part of the Rose deal and also added former Detroit backup floor general Spencer Dinwiddie, though neither has established himself as a viable option just yet.

Valentine could fill the roll of point guard as he averaged over 7 assists per game his senior season.

Read More
Basketball, Chicago Bulls, NBA, NBA Draft
Who did the Bulls pick in the 2016 NBA Draft? The Bulls had two picks in Thursday's draft, Nos. 14 and 48 overall. They used No. 14 on Denzel Valentine.