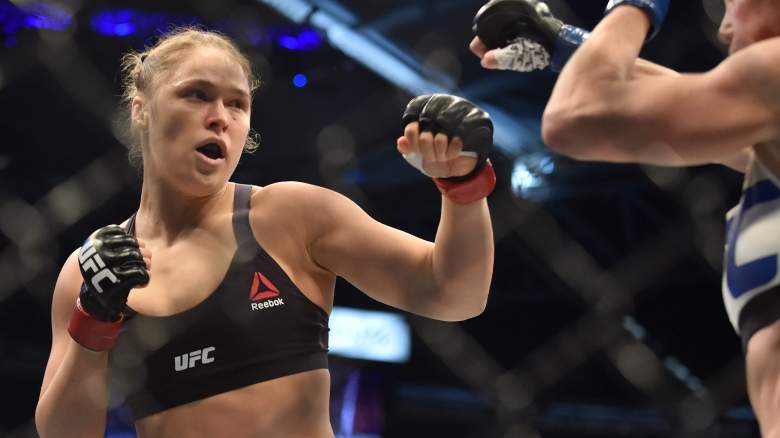 Saturday night at UFC 200 will mark the second women’s bantamweight title fight since Ronda Rousey lost her belt in November, and there’s still no firm return in sight for the 29-year-old megastar.

That said, UFC president Dana White is hoping to see “Rowdy” back in the Octagon around December or January:

I’m hoping we’re going to get Ronda back this year. She just had surgery yesterday on her knee — nothing serious, just get in there and scope it, clean it out a little bit.

She feels great. Her spirits are great. She’s been training. If she fights, I’m hoping she fights December. If not, she would probably fight at the New Year’s show at beginning of [next] year.

The question of who will face Rousey also becomes somewhat simple because White also confirmed that the former champ will get a title shot upon her return.

For now, that leaves two options: Miesha Tate, the current champ who is 0-2 in her career against Rousey, or Amanda Nunes, who faces Tate for the belt at UFC 200.

“I feel like something would be missing from my career if I didn’t fight Ronda again,” Tate told TMZ in June.

Another potential option that fans have long been clamoring for: Cris “Cyborg” Justino. The 30-year-old Brazilian and former Invicta champ finally made the move to the Octagon in May, dropping Leslie Smith with a first-round TKO at UFC 198.

Title fight or not, a Rousey vs. Cyborg fight would certainly be the best for business. For now, though, it doesn’t sound like that’s in the cards.

NOTE: Users looking to watch Anderson Silva vs. Daniel Cormier, Miesha Tate vs. Amanda Nunes and all of the UFC 200 PPV can click here to order the event

Read More
Ronda Rousey, UFC
Ronda Rousey hasn't entered the Octagon since her shocking loss in November. When will she make her return, and who will she fight?