In the summer of 2016, the ex-girlfriend of Ezekiel Elliot took to Instagram to accuse the Dallas Cowboys star of domestic violence. Tiffany Thompson, 21, of Columbus, Ohio, uploaded the pictures on the morning of July 22 2016, a short time later she set her page to the private setting. The incident occurred late on the night of July 20. Under the first image, Thompson wrote:

Just for every woman out there getting abused it’s time to put a stop to it. This has been happening to me for months and it finally got out of control to where I was picked up and thrown across the room by my arms.

Thrown into walls. Being choked to where I have to gasp for breath. Bruised everywhere, mentally and physically abused. It’s not okay. So I want each and every one of you girls to step away now from domestic violence. You’re worth so much more. I got told it was called “tough love” I’m sorry if you love someone you don’t touch your loved ones.

In a subsequent comment, Thompson wrote “#Stopdomesticviolence.” More than a year later, on August 11, Elliot was suspended without pay for the first six games of the 2017 NFL season as a result of the incident. His lawyers say he will appeal the suspension. According to the NFL’s statement on the issue, Thompson was interviewed by investigators.

1. Thompson Discussed Selling a Sex Tape of Her & Elliot Because She Was Trying to ‘Go on Vacaction & Get a Boob Job’

Thompson: What if I sold mine and Ezekiel’s sex videos?

Friend: We’d all be millionaires.

Friend: We could black mail him w that.

Thompson: I want to bro.

Friend: Let’s do it.

Friend: Id be like look give me 10k or I’ll just sell our sex videos for the same amount flat.

Friend: Me and my friends tryna go on vacation and get boob jobs.

Around the time of the attack, Thompson had posted photos of her bruises to Instagram:

On the same day that the reports of a sex tape emerged, the NFL released a statement criticizing those who had spread “derogatory information to the media about the victim in Ezekiel Elliot discipline case.” That release continues:

It’s a common tactic to attempt to prove the innocence of the accused by discrediting the victim – in this case Ms. Thompson – when come forward to report such abuse.

Common or not, these tactics are shameful. Efforts to shame and blame victims are often what prevent people from coming forward to report violence and/or seek help in the first place.

2. A Police Report Says That Thompson Is Accusing Elliott of Beating Her While She Sat in Her Car

A police report based on the complaint made by Thompson on the morning of July 22 in Ohio. That report says that Thompson told officers that Elliott attacked her while she sat in the driver’s seat of her car. Elliott was not taken into custody due to conflicting reports from witnesses, one of whom was in the car with the couple. Thompson was later referred on to the prosecutor’s office.

NBC Columbus reports that police had been called to respond at the Grandview Apartments.

You can listen to Thompson’s 911 call above in which she tells and operator that her boyfriend has been beating her for five days.

Elliott played college ball Ohio State University in Columbus. During his time there, Elliott was cited by law enforcement for driving on a suspended license. The couple met while he was attending school, reports ABC Columbus. 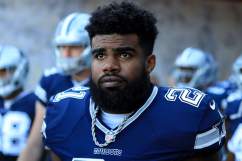 3. Elliott Said He Has Proof That Thompson Was Setting Him Up

High-ranking #Cowboys source says that Ezekiel Elliott has messages saved on his phone proving his ex-girlfriend is trying to set him up.

TMZ reports that Elliott has denied Thompson’s allegations and also denied that he was Thompson’s “live-in boyfriend.” The police report shows that Elliott told officers that he did pay Thompson’s rent and was co-sign on her car.

The Cowboys running back said that Thompson got her injuries from a bar fight she was involved in. TMZ spoke to one of Elliott’s representatives who said, “I can assure you [the allegations] are not true.”

WFAA’s Mike Leslie tweeted that a source close to Elliott says that the NFL star has “messages saved on his phone proving his ex-girlfriend is trying to set him up.” While Dallas Morning News’ Cowboys beat writer Clarence Hill tweeted, “Per a source, Elliott broke off the relationship and alleged victim said she would ruin him if he did. Thus the accusations.”

You can read the full police report here:

In a statement to TMZ, released a year after the allegations, Thompson described her relationship with the Cowboys’ star as “Toxic.” Thompson wrote:

Exactly 1 year ago today my life changed forever. finally got the strength to be the strong woman I was and got myself out of a very toxic relationship. Ladies never think you’re too in love or too scared to leave because at one point that was me. There’s plenty of opportunities out there for you. Love yourself first. Speak up and stop domestic violence.

NBC Denver’s Shaun Griswold reports that the NFL’s investigation into Elliot and Thompson “has credible evidence Ezekiel Elliot abused his girlfriend three times in one week.”

4. In May 2016, a Woman Snapchatted a Pic of Elliott Sleeping in Bed Beside Her

Thompson first became a viral sensation in May 2016 just after Elliott was drafted by the Cowboys. A woman posted a Snapchat pic of Elliott sleeping while she laid in bed beside him. The caption read, “Dallas Cowboys newest running back Ezekiel Elliot.” The girl in the Snapchat pic was an Instagram model, according to Busted Coverage.

Thompson responded to the controversy with a tweet reading, “Y’all don’t gotta worry about me I’m just fine sitting here with you guys laughing.”

5. She Worked as a ‘Doll’ at an Ohio Nightclub

According to her Facebook page, Thompson worked as a “doll” at a nightclub in Columbus, Ohio, known as Columbus Sway. The venue closed in January 2016. She’s a native of Reynoldsburg, Ohio, but lives in Pickerington where she graduated from high school. Thompson lists herself as single on Facebook.

Elliott holds up a jersey with NFL Commissioner Roger Goodell after being picked #4 overall by the Dallas Cowboys during the first round of the 2016 NFL Draft at the Auditorium Theatre of Roosevelt University on April 28, 2016 in Chicago, Illinois. (Getty)

This is just the latest domestic violence case that the NFL is being forced to deal with. The day before the allegations emerged, Ray Rice, the former Baltimore Raven at the center of one of the most famous NFL domestic violence cases, made a desperate plea for a return to the NFL. Rice told USA Today that he would donate all of his salary to domestic violence programs if he was signed by a team.

Elliott was selected fourth overall by the Dallas Cowboys in the 2016 NFL draft. The league’s official website named his as one of the favorites to win Offensive Rookie of the Year. His contract, which he signed on May 18, is worth $24.9 million with a $16.3 million signing bonus.