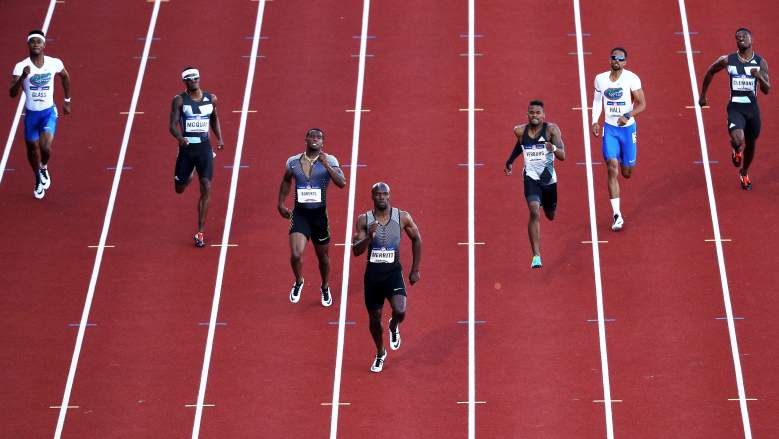 15 more spots on the USA track & field Olympic team were captured on Saturday at Hayward Field.

Here’s a look at the results, highlights and Rio qualifiers:

Maggie Malone’s best throw of 60.84 meters was short of her 2016 American-leading mark (62.19), but it was enough to win Saturday’s event and qualify for her first Olympic Games.

She’ll be joined by two-time Olympian Kara Winger, however and one-time Olympian Brittany Borman. Hannah Carson finished second on the day but misses out on Rio because she hasn’t hit the Olympic standard.

Here’s a look at the final results:

Christian Taylor has the two best jumps in the world in 2016, but the 2012 Olympic gold medalist was bested by 2012 silver medalist Will Claye on Saturday night:

Taylor and Claye will continue their rivalry in Rio, where they’ll be joined by Chris Bernard, who owns the fourth-best jump in the world in 2016, meaning this trio could very well sweep the podium in Brazil.

At the age of 41, Bernard Lagat is going back to the Olympics. The American record holder proved that age is but a number, making a final push on the final stretch to surpass the younger guys and qualify for his fifth Summer Games:

Hassan Mead, who owns the best American time in 2016, finished second, while Paul Chelimo held off Eric Jenkins by six one-hundredths of a second for the final spot in Brazil.

Ben True, who finished sixth at the 2015 World Championships, fell to a disappointing fifth, while Galen Rupp will settle for two Olympic events (marathon and 10K) in Rio, as he came in ninth.

It appears Justin Gatlin is ready for the 100/200m double in Rio. After winning the 100 last week, the veteran sprinter topped 2016 world-leading LaShawn Merritt by four one-hundredths of a second on Saturday night:

There’s a football player going to Rio. Oregon wide receiver Devon Allen picked a great time to record a personal best (13.03, the third-fastest time in the world this year), as he raced out to a dominant victory in front of the Eugene crowd:

He wins the men's 110m hurdles with a blazing 13.03! More highlights: https://t.co/s8sasnBSYw https://t.co/LuPeshQnvV

The next two spots came down to a photo finish, as Ronnie Ash and 2012 Olympian Jeff Porter finished at 13.205 and 13.206, respectively. Aries Merritt, the gold medalist from London, won’t get a chance to defend his title, as he missed out by one one-hundredth of a second at 13.22.