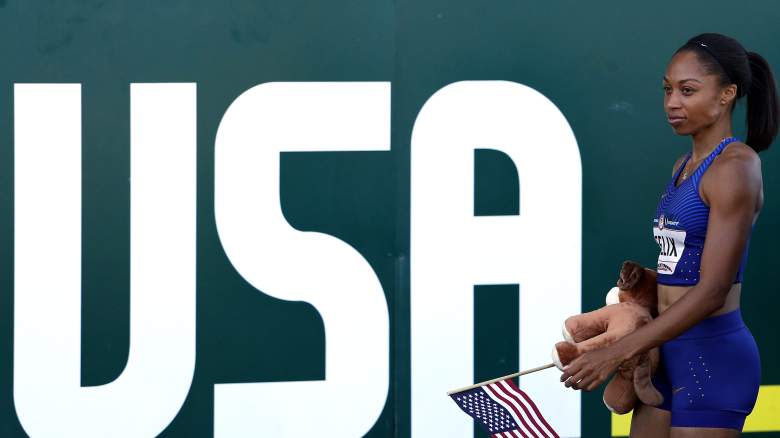 USA track & field Olympic qualifying is in the books.

Here’s a look at Sunday’s final results and qualifiers, as well as an updated Team USA roster for Rio:

Suhr, Morris and Weeks easily topped the rest of the field before battling it out to be crowned US champion. Ultimately, it was the 2012 Olympic gold medalist out-jumping the others, but this impressive trio of medal contenders (Suhr and Morris are 1 and 2 in the world this year, while the 19-year-old Weeks is rising) will get to continue their battle in Brazil next month.

2012 Olympic silver medalist Erik Kynard skipped 2.32 meters to give 2.35 a shot. He missed on all three attempts, but he’s easily the U.S. champ nonetheless.

Kyle Landon and Bradley Adkins were next in line, but because Landon doesn’t have the Olympic standard, his spot goes to the next highest finisher who does, and that’s Ricky Robertson.

2013 World Championships silver medalist Dalilah Muhammad clocked a personal best, an Olympic trials best and a world-leading time to win by more than a full second.

She’ll be joined in Rio by Ashley Spencer and 16-year-old Sydney McLaughlin, who sets a bit of history herself:

Sydney McLaughlin displaces Vashti Cunningham as the youngest person to qualify for a U.S. Olympic Track and Field team since 1980.

Here are the final times:

Here are the final standings:

It was a dominant performance from Molly Huddle, who led the entire race and pulled away from the field on the final lap to complete the impressive 5K/10K double at the Olympic trials this week.

Also of note: @MollyHuddle is the first woman in American history to win the 5000m/10,000m double at the Olympic Trials. #TrackTown16

It’s unclear if she’ll race both in Rio, but she noted on the NBC broadcast that she’s likely only to do the 10K.

Here are the final times:

Johnny Dutch, who entered with the world’s two fastest times in 2016, had a significant lead after the final hurdle but hit a wall without about 50 meters to go, as he was passed up by Kerron Clement, Byron Robinson and Michael Tinsley.

While there’s been a lot of youth dominating the trials this week, there will be plenty of Olympic experience in this race next month. Clement has made two Olympic teams and won silver in 2008, while Tinsley won silver in London in 2012.

Jenny Simpson and Shannon Rowbury finished first and second with time to spare, while the final spot in Rio came down to Brenda Martinez and Amanda Eccleston, who basically dove across the finish the line simultaneously.

The nod went to Martinez, who makes the team by three one-hundredths of a second.

There will be no Olympic double for Allyson Felix, who finished fourth behind Tori Bowie, Deajah Stevens and Jenna Prandini. Already qualified in the 400, Felix came in one one-hundredth of a second behind a diving Prandini in one of the tightest finishes you’ll ever see.

ICYMI: Jenna Prandini edged out Allyson Felix in a photofinish in the Women's 200M Final pic.twitter.com/gH6gJtaJKP

After missing a medal in London by .04 seconds, Matthew Centrowitz will get another chance at Olympic hardware after setting a trials-record of 3:34.09.

He’ll be joined by Robby Andrews and Ben Blankenship, who held off Leonel Manzano down the final stretch.

Read More
Rio Olympics 2016, Track & Field
It's the final day of USA track & field Olympic qualifying. Read on for the results and an updated team roster.