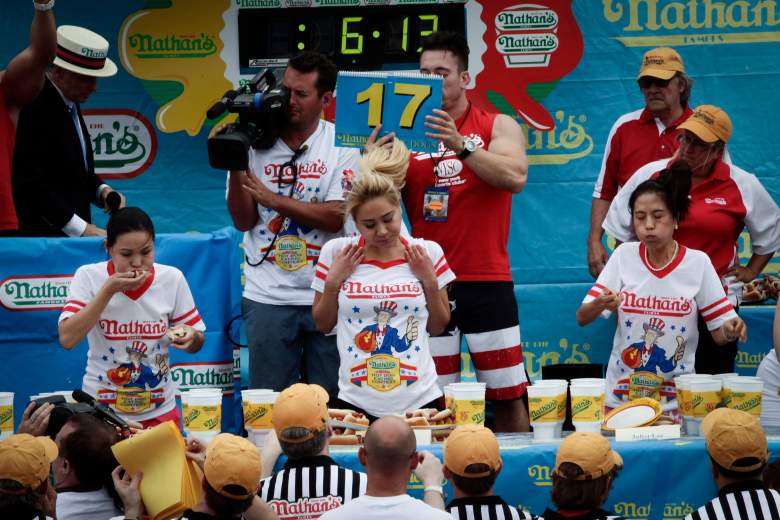 The Nathan’s Famous Hot Dog Eating Contest marked its 100th year anniversary on Monday. The 4th of July tradition has become a national spectacle, drawing in thousands to Coney Island.

Competitors vied for $40,000 in total prize money, according to Major League Eating, the sport’s national organizing body. The first-place competitors in men’s and women’s will receive $10,000. Competitors had 10 minutes to eat as many hot dogs and buns as they can.

The women’s competition took place this morning and, was another highly-contested battle between Miki Sudo and Thomas. Sudo defended her 2015 title, eating 38.5 hot dogs before time ran out. It marked Sudo’s third consecutive win, who is the World No. 3 competitive eater in Major League Eating. Thomas finished with 35.

Sudo and Thomas are the top-ranked women in the field.

Fifty-three percent expected Sudo would take her third straight win, according to Forbes.

Sudo said the weather was ideal for hot-dog eating.

“It’s my third year, and I think it’s the best weather I’ve had to date,” she told ESPN on the broadcast.

The men’s competition was a heated showdown between Matt Stonie and Joey Chestnut, who are the number one and two competitive eaters in Major League Eating, respectively.

Stonie beat Chestnut in 2015, ending Chestnut’s eight-year run. The year prior, America watched as Chestnut popped the question to his longtime girlfriend on stage just before his eighth consecutive win. Chestnut and his fiancee called off the wedding shortly before last year’s July Fourth hot dog eating contest, in which he fell to Stonie. Chestnut lost his World No. 1 ranking.

2015 marked a rough year for Chestnut all-around, but he came back this year with a vengeance.

The 32-year-old reclaimed his title against Stonie, eating 70 to Stonie’s 53, and earning his ninth Nathan’s Hot Dog Eating Contest win.

“Everything was amazing. I knew going into the contest my body was working,” he told ESPN after the contest.

“I came back stronger than ever.”

Chestnut set a new world record for hot dogs on June 28, eating 73 1/2 hot dogs and buns in 10 minutes at a qualifier, which took place at Washington, D.C.’s annual barbecue battle.

He earns an annual income around $200,000 from prize money, sponsorships and public appearances according to Forbes. 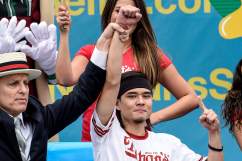 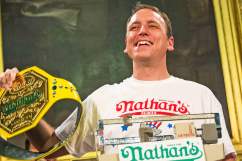