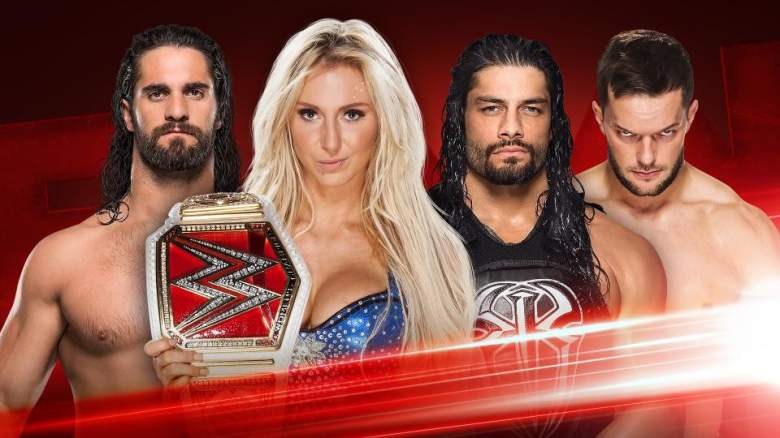 On this week’s Monday Night Raw, the roster will have to grapple with the WWE Championship being on SmackDown. (WWE.com)

Tonight on Monday Night Raw, the WWE universe has a lot to grapple with following Sunday’s Battleground pay-per-view. July 25th’s show will be broadcast live from Pittsburgh, Pennsylvania beginning at 8:00 p.m. Eastern Time on the USA Network. Read on for updates from throughout the evening, followed by a preview of the event written earlier this afternoon:

8:00 – The show opens with a brand new theme, logo and set, complete with red ropes. The entire Monday Night Raw roster enters. Stephanie McMahon expresses disappointment in Roman Reigns for losing at Battleground, and the entire crowd boos. McMahon calls him a loser. Tonight, there will be two fatal 4-way matches, and the winners will fight in a main event. This event will determine who will face Seth Rollins at SummerSlam for the brand new WWE Universal Championship title. The competitors will be Sami Zayn, Sheamus, Chris Jericho, Cesaro, Roman Reigns, Rusev, Kevin Owens, and Finn Balor.

Mick Foley announces that Charlotte will be defending her woman’s championship title against Sasha Banks tonight.

8:15 – Finn Balor, Kevin Owens, Rusev and Cesaro compete in a fatal 4-way match, the first of two that will determine who fights Seth Rollins at SummerSlam. Finn Balor wins.

9:23 – The New Day enter. They celebrate a year of being WWE World Tag Team Champions and the release of Booty O’s. A video package shows highlights from the team’s time together. They decide to select one person from the crowd to be an honorary member of the New Day. A man wearing a Booty O’s shirt is selected, and he keeps insisting his real name is Sonny Boy.

While New Day and Sonny Boy are celebrating, Karl Anderson and Luke Gallows enter and attack the tag team.

9:38 – Curtis Axel appears in the ring, saying that just because he was picked last during the draft doesn’t make him irrelevant.

9:48 – Backstage, Golden Truth mocks Bob Backlund and Darren Young, and Bob flips out at them, screaming at Darren that he has to get out there and win the title.

9:51 – In a backstage interview, Charlotte says that she’ll defeat Sasha Banks because The Boss doesn’t have a partner tonight. Charlotte adds that tonight Sasha will bow down to her, the queen.

10:47 – Finn Balor defeats Roman Reigns. He will go on to fight Seth Rollins at SummerSlam next month.

First and foremost, on tonight’s Raw we should expect Stephanie McMahon and Mick Foley to express disappointment in the results of Battleground. The WWE Championship was retained by Dean Ambrose, a SmackDown performer, leaving Monday Night Raw a step behind its competition. Many fans have speculated that there might emerge two championship belts going forward, one for SmackDown and one for Raw. If that’s the case, we’ll almost certainly find out tonight. Already it seems that the WWE is doing all it can to make the two shows quite distinct from one another, even debuting two new logos recently that are in completely different styles.

It should also be interesting to examine the ratings for tonight’s episode of Raw. In the past, SmackDown has brought in a significantly smaller audience than Raw, in part because it was pretaped and in part because it rarely featured groundbreaking plot developments. But now that SmackDown is live, and now that it’s the home of the WWE Champion, could it actually begin surpassing Raw in the ratings? Will we see viewers choosing one show or the other due to their feelings about the two rosters, or will the majority of fans tune in to both? Last week’s SmackDown was the first in many years to beat Raw in the ratings, although this was a special event and not just a typical episode. It remains to be seen how long this trend will continue.

On July 25th’s Raw, we should also expect to hear from Roman Reigns for the first time since his return from suspension. Reigns was met with overwhelming boos at Battleground last night, and it’s unclear what direction the company will take him in going forward. Will he be given some sort of a redemption storyline? Will he be put on the back burner? Might he finally turn heel? We’ll likely get a better idea of the future of the Roman Empire tonight, and the WWE.com official preview teases more developments between Reigns and Seth Rollins.

In addition, NXT fans can look forward to the Raw debut of Finn Balor and Nia Jax, who were drafted to Raw during the SmackDown draft ceremony last week. Plus, WWE’s preview suggests that following the Sami Zayn and Kevin Owens feud coming to a close, an embarrassed Owens may take out his anger on a brand new rival. And interestingly, it seems that Cesaro’s rant against the WWE management last week will be incorporated into the show. Cesaro recently told the WWE Network that he was disappointed that the company was beginning to focus too much on the management and not on the superstars, and at the time it was unclear whether this was scripted. WWE.com says we should expect Cesaro to set out on a mission to be the best in-ring performer in the company.

For more on Battleground, check out our full rundown of the pay-per-view’s events below: 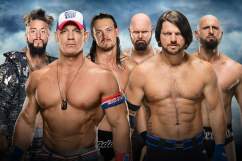