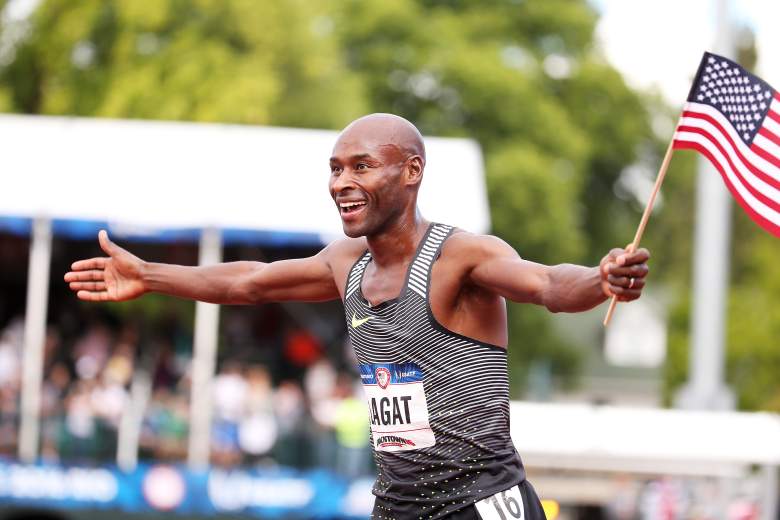 Bernard Lagat is the oldest American runner at the Summer Olympics in Rio. (Getty)

On Saturday, Bernard Lagat ran the 5,000-meter final for the U.S. at the Rio Olympics and won bronze. He is the oldest runner representing the U.S. at 41 years old and Rio is his fifth Olympic Games. However, it is only his third as a U.S. athlete. He represented his native Kenya at the 2000 and 2004 Olympics, where he won bronze and silver, respectively, in the 1,500-meter race.

Here’s a look at Lagat’s life and career.

1. Lagat Says the Key to His Longevity is Not Believing He’s Old 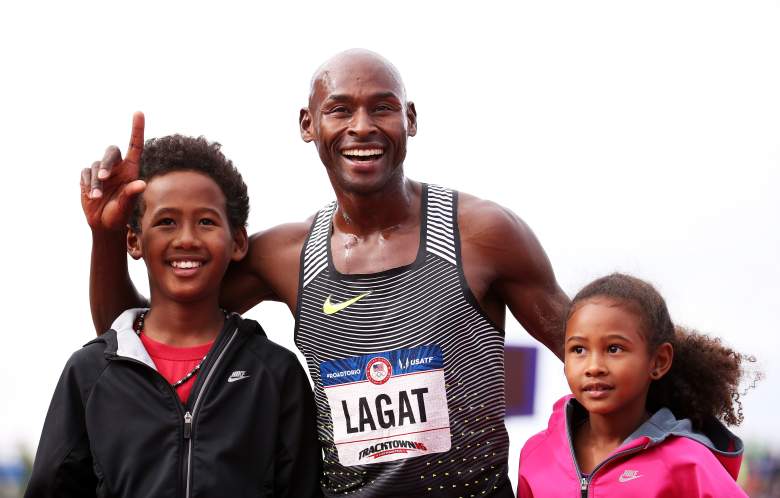 Bernard Lagat with his children, Miika Kimutai and Gianna. (Getty)

“I don’t believe I’m old,” Lagat said after the trials, reports Yahoo Sports. “Because if you believe you’re old, I’m gonna run like an old man.”

Lagat isn’t the only American runner past 40 at the Rio Olympics though. Meb Keflezighi, who was born a few months after Lagat, is 41 and running the Olympic marathon on Sunday. 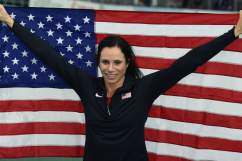 2. Lagat Was Already an American Citizen When He Ran for Kenya at the 2004 Summer Olympics 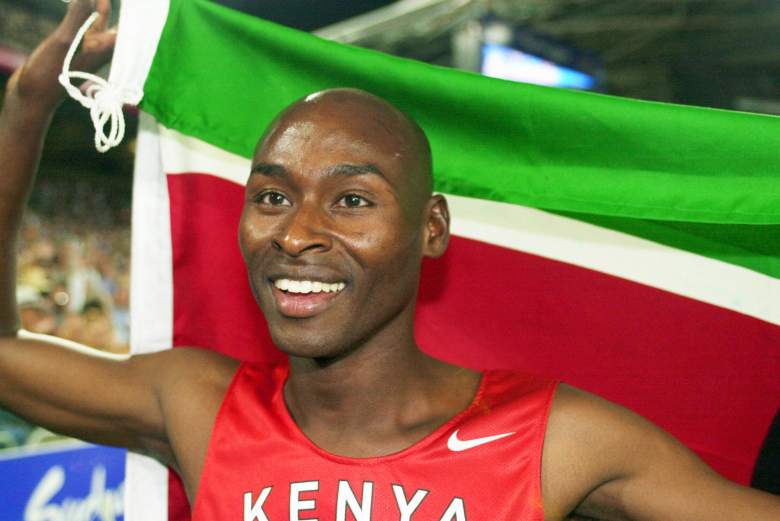 At the 2004 Summer Olympics in Athens, Lagat was still representing Kenya and won the silver medal in the 1,500m race for his native country. However, almost a year after the Olympics, The Chicago Tribune discovered that Lagat had actually become an American citizen on May 7, 2004. That was over three months before the Olympics and almost a full year before it was officially announced that Lagat became a citizen.

In a 2008 interview with the New York Times, Lagat said that he kept the truth about his citizenship a secret because he didn’t want his Olympic dreams crushed. Had he revealed the news, he wouldn’t have been able to run under the U.S. flag, per track and field rules. Kenya also doesn’t have dual citizenship, unlike the U.S.

“I wanted to run in the Olympics,” Lagat told the Times. “I didn’t want to be stopped. I just wanted to run.”

There was some outcry to have Lagat return his medal, but that never happened.

Lagat has been living in the U.S. since 1996 and received a green cart in 1998. He went to Washington State University and has a management information systems degree. 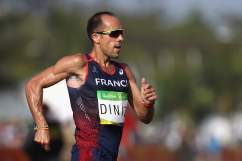 3. He’s Married to Gladys Tom, a Dietitian Who Keeps Him Healthy 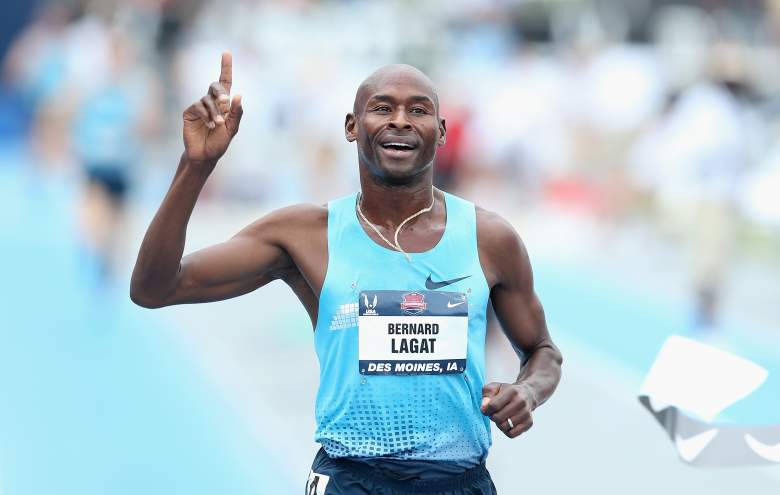 One explanation for Lagat’s longevity might just be his healthy diet. He’s married to Gladys Tom, a dietitian he met at Washington State. They have two children, son Miika Kimutai, 10, and daughter Gianna, 7, and live in Tuscon, Arizona.

“She is someone I can rely on in making sure that I’m nourished the right way, which helps me perform my best throughout my running career,” Lagat said of his wife in a Runners World interview. “Gladys also helps keep me healthy so I can live a long and healthy life.”

When asked what her food philosophy is, Tom old Runners World:

We try to eat a balanced diet, so typically every meal has to have a vegetable, protein, and carbs. I don’t believe in monitoring Bernard’s intakes nor following strict diets. I hate the idea of being a food police. He’s old enough and wise enough to decide for himself. The only thing I absolutely cannot have him eat in the house is goat intestines. I think that’s fair.

4. Lagat Called His Beijing Performance the ‘Biggest Disappointment in My Life’

Bernard Lagat posted this picture with Simone Biles on his Twitter page. (Twitter/@Lagat1500)

There were high hopes for Lagat heading into the Beijing Games, especially after his successes in Sydney and Athens. On top of that, he had won gold in the 1,500m and 5,000m at the 2007 World Championships. Unfortunately, it was not to be. He failed to medal and was dealing with an Achilles’ injury.

“I always have to not forget Beijing, because if I forget Beijing it’s like I’m not really realistic even about myself,” Lagat told the Associated Press while preparing for the 2009 World Championships, where he won silver in both races. “It was the biggest disappointment in my life.”

Although he felt better in London, Lagat finished fourth in the 5,000m and didn’t run the 1,500m. 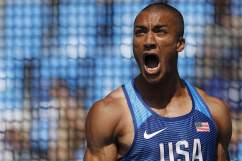 Decathlon Scoring System & Formula: How Does it Work? 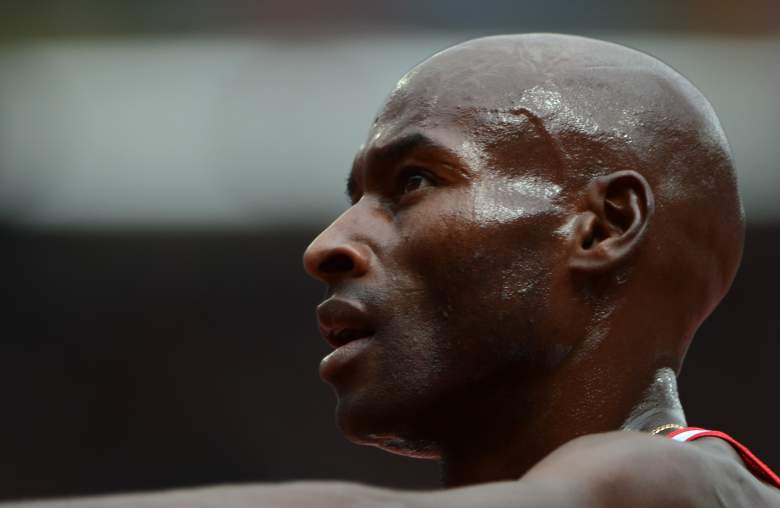 Viola, who is 27, represented Kenya at the Rio Olympics and made it to the semifinals in the women’s 1,500m She finished sixth in the semis, running 4:06.83. Viola is the youngest of her siblings. She also wen to the U.S. for college, attneding Florida State.

Lagat’s younger brother, Robert Cheseret, served in the U.S. Army in hopes of qualifying for the London Olympics. The 2012 U.S. Olympic Trials was the first time Lagat and Robert raced each other.

Read More
Rio Olympics 2016, Track & Field
Bernard Lagat is competing in his fifth Olympics. The 5,000-meter runner will try to win his first medal since 2004 on Saturday.