John and Wanda Saunders pictured on her Facebook page in February 2015.

Longtime ESPN anchor John Saunders is being mourned by everyone who watched him and survived by his wife, Wanda, and their two daughters. In a statement after his passing, ESPN President John Skipper said, “John was an extraordinary talent and his friendly, informative style has been a warm welcome to sports fans for decades. His wide range of accomplishments across numerous sports and championship events is among the most impressive this industry has ever seen. More importantly, John was a beloved and devoted family man who cared deeply about people and causes, as evidenced by his long-standing efforts as a passionate board member for The V Foundation for Cancer Research. He was one of the most significant and influential members of the ESPN family, as a colleague and mentor, and he will be sorely missed. Our thoughts are with his loved ones at this extremely difficult time.”

Here’s what you need to know about the love of John Saunders’ life:

1. The Couple Were Advocates for Juvenile Diabetes Research

Like her husband, Wanda Saunders is an advocate for juvenile diabetes research. In 2007, she was photographed attending a Jimmy V Foundation event with her husband. John Saunders had been a member of the board of directors of that charity. While in August 2015, the couple traveled to Nappa, California, to attend a Jimmy V fundraiser.

In 2012, Saunders and her husband were active in the re-election campaign for President Obama. The couple were on the board of Rivertowns for Obama. The family was present at the president’s January 2013 inauguration.

The couple lived with their two daughters, Jenna and Aleah, in Hudson-on-Hastings, New York. The town is part of the Rivertowns along the Hudson. Online records show the couple lives along the Pinecrest Drive in the town. According to an old profile, the Saunders family formerly lived in Waterbury, Connecticut, a short distance from ESPN’s headquarters in Bristol.

3. One of the Couple’s Daughters Is an Aspiring Visual Artist

Wanda pictured with her daughters Jenna and Aleah. (Facebook)

The couple’s daughter, Aleah, 27, maintains a social media page at Deviant Art, a site for aspiring visual artists. She goes by the moniker Zee-Stich on the site. Aleah Saunders writes in her bio, “I’m an artist who enjoys writing, Disney, Horror, Roleplaying and making Original Characters.” She adds that she is an administrator of Disney World of War, a roleplay web forum. According to her Facebook page, Aleah Saunders is a graduate of Hastings High School and Fordham University. She works for CBS Sports’ College Sports Network.

Meanwhile their other daughter, Jenna Saunders, is a fashion designer who lives in New York City. She studied design at Ryerson University in Toronto, according to her Facebook page.

In 2013, John Saunders littered his personal Facebook page with images of his family’s summer vacation to Africa. On his Twitter bio, he wrote in part that he is the “lucky daddy to two sweethearts.”

4. Saunders’ Was About to Release a Book on His Battles With Depression

Stories of Hope and Recovery: John Saunders"Asking a person who is suffering to move on is like asking a person with a broken leg to run a marathon." John Saunders, a sports journalist, shares a personal story of hope and recovery from mental health problems, especially about how to support a loved one with a mental health problem. FOR MORE INFORMATION: How you can support a friend or family member with mental health problems: http://go.usa.gov/Wuu3 How parents and caregiver can support their children or other dependents: http://go.usa.gov/WuzF How you can start a conversation about mental health: http://go.usa.gov/WuzW Sign up to receive email updates from MentalHealth.gov: https://public.govdelivery.com/accounts/USHHS/subscriber/topics?qsp=USHHS_1 — U.S. Department of Health and Human Services (HHS) http://www.hhs.gov We accept comments in the spirit of our comment policy: http://www.hhs.gov/web/socialmedia/policies/comment-policy.html HHS Privacy Policy http://www.hhs.gov/Privacy.html2013-06-03T12:44:28.000Z

Saunders had been due to release a book on his battles with depression over the years. It’s titled “Playing Hurt.” In the Amazon blurb, “His story unfolds as so many of our lives do—among family, friends, and colleagues—but it also peers into places we don’t often discuss openly—psych wards and hospitals. Here is the honest story of a public figure facing his own mental illness head on, and emerging far better off for his effort.”

His ghostwriter, John Bacon, tweeted upon hearing of John Saunders’ passing, “John Saunders and I finished his life story this spring, after five years of working on it. He was an amazing man, and truly, to me, a hero.”

5. There Are No Reports of Foul Play in Saunders’ Death

The ESPN statement announcing John Saunders death didn’t mention a cause of death. TMZ reports that there was no foul playing involved in his tragic passing. 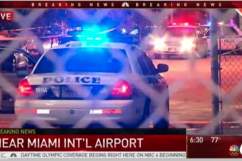 Read More
5 Fast Facts, Breaking News, Celebrities
Longtime ESPN anchor John Saunders is being mourned by everyone who watched him and survived by his wife, Wanda, and their two daughters.