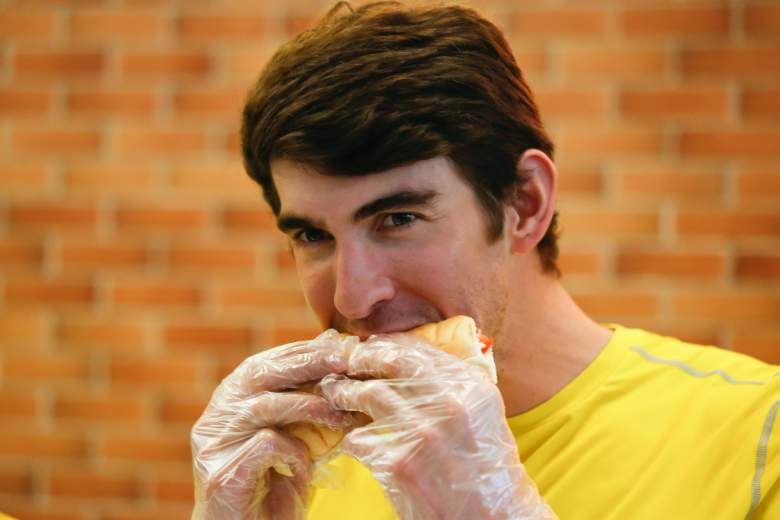 He changed his diet well before Rio.

Although some think the massive calorie claim Phelps made in 2008 was an exaggeration, there’s no question that Phelps requires a lot of energy to fuel his gold medal performances (he needs 1,000 calories an hour when racing).

He is the “most decorated athlete in Olympic history,” says USA Today. The 31-year-old Phelps stands 6 foot 4 inches tall and weighs 194 pounds.

What does he eat now? It’s a far cry from the whole pizzas and chocolate chip pancakes of the past. 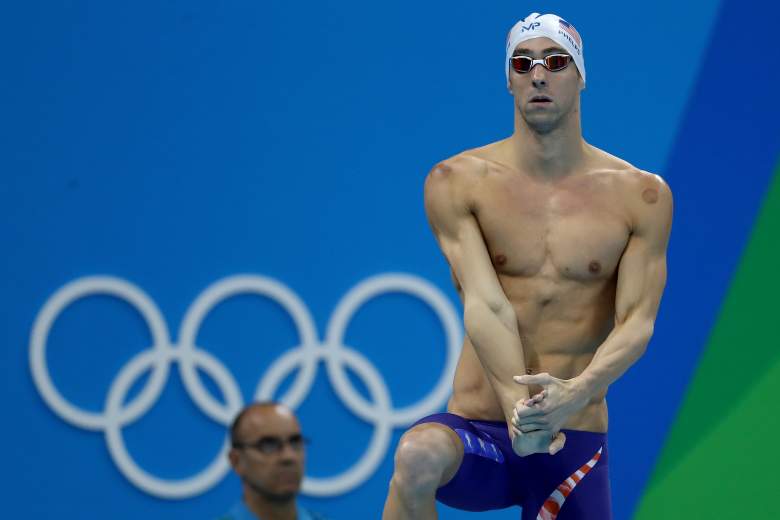 Michael Phelps prepares ahead of his Men’s 100m Butterfly heat on Day 6 of the Rio 2016 Olympic Games at the Olympic Aquatics Stadium on August 11, 2016 in Rio de Janeiro, Brazil. (Getty)

Let’s revisit what he used to eat first. Before the Olympics in Beijing, Phelps made the jaw-dropping statement that he ate 12,000 calories a day. The New York Post said Phelps’ diet involved “ingesting 4,000 calories every time he sits down for a meal” and “resembles that of a reckless overeater rather than an Olympian.”

Granted, he burns a lot of calories off, but his diet wasn’t what you might expect from the Olympian with all that gold.

Pizza, pasta and fried egg sandwiches were staples in his diet, said WebMD. Chocolate chip pancakes and energy drinks also made the list.

Men’s Health said he used to eat this: “Three fried-egg sandwiches loaded with cheese, lettuce, tomatoes, fried onions, and mayonnaise; two cups of coffee; one five-egg omelet; one bowl of grits; three slices of French toast topped with powdered sugar; and three chocolate-chip pancakes.” And that was just for breakfast.

The New York Post said he ate a “pound of enriched pasta and two large ham and cheese sandwiches slathered with mayo on white bread” for lunch and a pound of pasta and whole pizza for dinner.

A normal man tried to replicate the infamous diet:

WebMD said experts doubted the 12,000 calorie claim because, even to eat 10,000 calories, a person would have to basically eat all day long. The expert estimated that Phelps needs about 6,000 calories a day because of his exercise regimen. 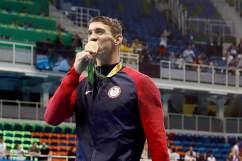 2. Phelps Filmed a Facebook Live Video to Debunk Claims That He Eats That Many Calories Now

Phelps no longer claims to eat 12,000 calories a day. He filmed a Facebook Live video to insist he eats a normal number of calories, said The Washington Post.

“I don’t eat many calories a day. I just really eat what I need,” Phelps said in the video, which he streamed in May.

“We are starting to make dinner now,” he says in the video, before announcing he was going to “go outside and grill chicken.” He also was going to have potatoes and a cucumber, tomato, and asparagus salad, he said. Sounds pretty normal!

One reason Phelps cut back on the calories? The Washington Post points out that he’s aging so his metabolism is slower.

3. Phelps No Longer Drinks Alcohol Since a DUI Arrest 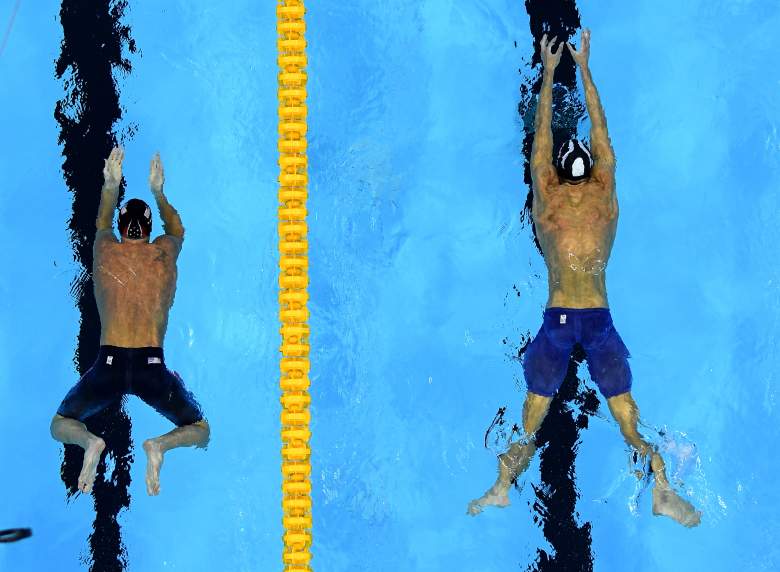 SB Nation says that Phelps “stopped drinking alcohol in 2014, but not directly for training.” Still, it’s one of the ways that Phelps cleaned up his diet for Rio.

That was the year that Phelps was charged with drunk driving, landing him in rehab. “He hasn’t drank since,” says SB Nation.

US News says Phelps spent 45 days in inpatient treatment and went to Alcoholics Anonymous. In 2009, he was also photographed holding what appeared to be a marijuana bong.

The news magazine quoted him as saying: “Before I even went to court, I said to myself that I’m not going to drink until after Rio — if I ever drink again,” he said. “That was a decision I made for myself. I’m being honest with myself. Going into 2008 and 2012, I didn’t do that. I didn’t say I was going to take a year off from drinking and not have a drink.” 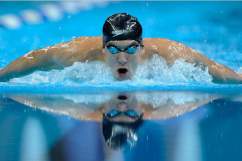 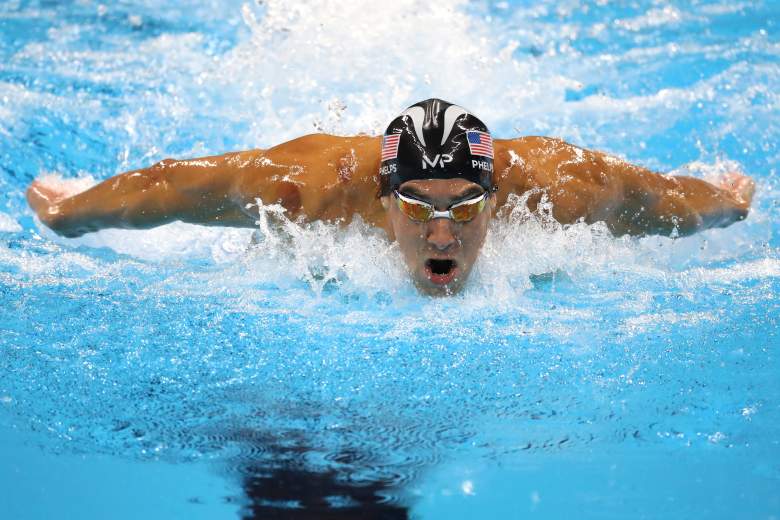 Michael Phelps of the United States competes in the first Semifinal of the Men’s 100m Butterfly on Day 6 of the Rio 2016 Olympic Games at the Olympic Aquatics Stadium on August 11, 2016 in Rio de Janeiro, Brazil. (Getty)

Phelps told Details magazine, “People make a big deal out of what I eat, but it’s not that crazy. I had a three-egg omelet and three pieces of French toast and coffee this morning.”

He tries to eat within a half hour of exercising “for recovery,” Yahoo said, quoting him as telling Details: “Otherwise I just try to put carbs into my system before I swim and then load up on the protein after. I don’t count calories. Whether it’s Sour Patch Kids or Reese’s or a bag of chips, if I feel like eating it, I’m going to eat it.”

SB Nation said Phelps has said “he was trying to move away from” a carb-heavy diet. However, Phelps “told reporters he ate a pound of spaghetti after the 4x100m relay” in Rio.

Men’s Health says Phelps adjusted his diet by turning more toward protein. “My main goal used to be to just eat a ton of calories,” he told the men’s magazine. “…Now I’m eating less, but I’m getting my calories from nutrient- and protein-dense foods.”

5. Phelps Has Tried to Live a Healthy Lifestyle In Other Ways But Eats a Sub Sandwich Every Day 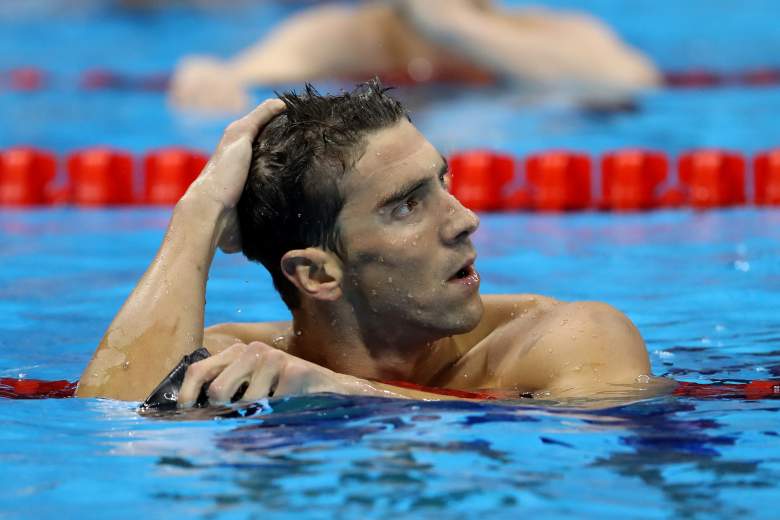 Phelps reacts in the second Semifinal of the Men’s 200m Individual Medley on Day 5 of the Rio 2016 Olympic Games at the Olympic Aquatics Stadium on August 10, 2016 in Rio de Janeiro, Brazil. (Getty)

Men’s Health says Phelps now eats a typical breakfast that consists of “one large bowl of oatmeal, a large omelet with ham and cheese, fresh fruit, and coffee.”

For lunch, he favors a 1,000-calorie Footlong Meatball Marinara sub from Subway. Dinner is “a plate (or two) filled with whole grains, lean meats, and fresh vegetables,” said Men’s Health.

Getting excited for dinner tonight. @gcooks22 hooked it up for me. Gotta get my calorie intake in tonight.

What does Phelps’ competitor and fellow American swimmer Ryan Lochte eat by comparison? He claims to eat 7 – 8,000 calories a day.

Bon Appetit says Lochte eats five to six eggs for breakfast, hash browns, pancakes, oatmeal and fruit. He loads up on carbs a week before competition and eats a full meal two to three hours before competing, said Bon Appetit. 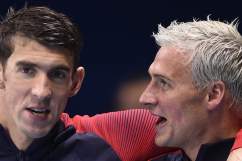