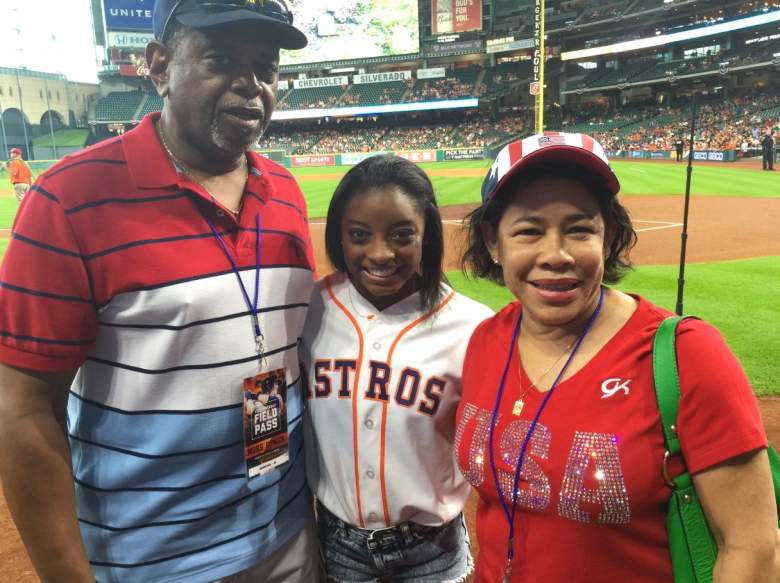 Sure, Simone Biles can make a double-back with a half twist look easy, but that doesn’t necessarily mean the road to success has been a walk in the park. The 19-year-old gymnast, who is projected to win the gold medal in the individual all-around finals this Thursday, was raised by her grandparents, Ron and Nellie Biles, and has vocalized her adoration for the couple multiple times over the years. So just who are Ron and Nellie Biles? How’d they meet, and where is Simone’s biological mother these days? Read on to find out.

1. Ron & Nellie Met in College While Ron Was in the Air Force

A chat with Nellie Biles, Mother of 4x U.S. Champion Gymnast Simone BilesWSENetwork.com WSEN.tv President Denise Saul caught up with the Mother of four-time U.S. Gymnastics Champion Simone Biles at the Olympic Team Media Summit and chatted with her about her daughter who many consider a lock to win gold at the 2016 Olympic games in Rio.2016-07-11T01:48:36.000Z

According to The Undefeated, Ron and Nellie met while Nellie was in college in San Antonio, and Ron was working in the Air Force. The Air Force wasn’t his only job, though; Ron was also busy raising his daughter, Shanon, as a single father. After struggling with drug and alcohol addiction, Shanon moved to Cleveland to be with her mother. In a recent interview with TMZ, Shanon Biles said she’s been sober since 2007, and believes Ron threw her under the bus when discussing her addiction with NBC. “He could have been more classy about it.” Shanon also says that she’s extremely supportive of Simone’s career and is happy to have reestablished a relationship with her biological daughter. “I just want to say I love you Simone … I’m so proud of you! Go Team USA and I’ll talk to you and see you when I can!”

Some time later, Nellie became a nurse, and even co-owned a chain of Texas nursing homes. Ron, meanwhile, worked as an air traffic controller. Together, the couple had two sons, Ron Jr. and Adam.

2. Simone Was Adopted by Her Grandparents at Age 6 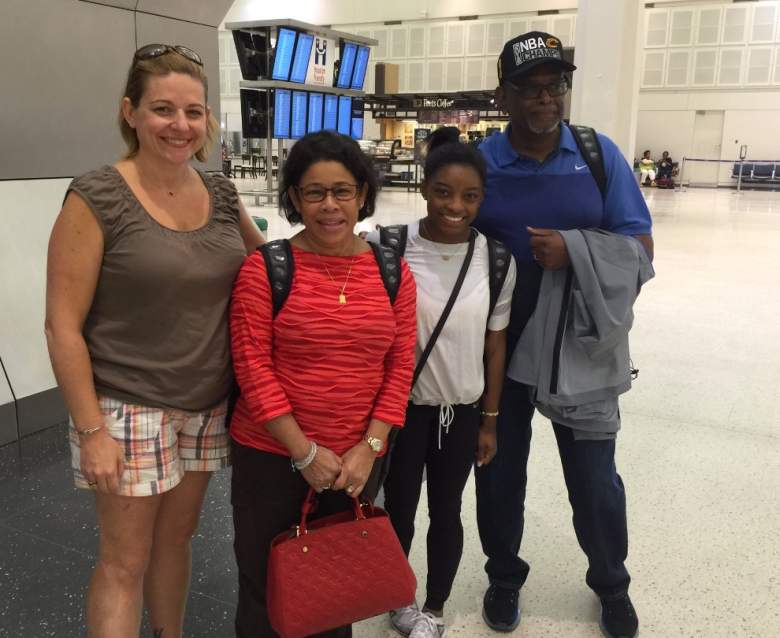 In 2003, when Simone was just six-years-old, she and her sister, Adria, were adopted by Ron and Nellie Biles, and moved into their home in Spring, just north of Houston. Upon taking Simone and Adria in, Nellie promised she would love the girls as if they were her own. She told The Undefeated, “I don’t know the exact date, but my heart just made room.”

Eventually, Simone decided that calling her grandparents ‘mom and dad’ was more fitting than referring to them as ‘grandma and grandpa’– she even recalls the moment she had the revelation. Simone told Texas Monthly, “I went upstairs and tried practicing it in the mirror—‘Mom, Dad, Mom, Dad.’ Then I went downstairs, and she was in the kitchen. I looked up at her and I was like, ‘Mom?’ She said, ‘Yes!’ ”

After Simone was adopted, the newly-expanded family went to counseling for two years, to make the transition somewhat smoother. Nellie told Reuters, “Me taking my barriers down and the children taking their barriers down and before you know it there is unconditional love that’s there between both of us, or between myself and my husband, and Simone and her sister. That goes for her brothers too, they feel the same way. It’s not something you can plan, it just happens.”

When Simone’s mother, Shanon’s, drug and alcohol issues became overwhelming, she and her three siblings were put in foster care. They jumped between foster homes for six years before finally being adopted. While Simone and Adria went to live with Ron and Nellie in Spring, Simone’s two brothers moved in with Ron’s sister. The Undefeated writes, “Simone used to do the talking for her little sister until she learned that she had a mother who wasn’t going anywhere and that she could relinquish that role.”

Nellie and Ron are extremely supportive of Simone’s career. In a recent interview, Nellie told Reuters,

It’s really hard to explain because you do not one day wake up and decide ‘oh good, I’m going to be her mother and I’m going to love being her mother’. It wasn’t an easy transition because they didn’t have any connection to me and I didn’t have any connection to them. It was a very trying time for me because they were not my children, they were related to Ron.

4. An NBC Announcer Was Slammed For Statements About Ron & Nellie

According to Fox News, a woman recently tweeted NBC announcer, Al Trautwig, suggesting that he call Ron and Nellie Simone’s parents (like she does), and not her grandparents. Trautwig replied by saying: “They may be mom and dad but they are NOT her parents.” The response ended up being deleted, but not before multiple people weighed in on the subject and criticized Trautwig for his statement. Fox referenced one woman, Carrie Goldman, an adoptive mother, who said “…the comments deeply disrespect adopted children and parents.” On August 8, Trautwig admitted that he “…regrets tweeting that the adoptive mother and father of American gymnastics star Simone Biles were not her parents, a declaration that angered advocates for adoption.”

Simone Biles Gets Interviewed By Her MomIn this video, Olympic gymnast Simone Biles and her mom, Nellie, play a round of Q&A, where we learn about why Simone laughs so much, a time Nellie helped Simone feel brave, and more. Still haven’t subscribed to Teen Vogue on YouTube? ►► bit.ly/tvyoutubesub ABOUT TEEN VOGUE Fashion, beauty tips, celebrity style, pop culture, videos,…2016-05-06T20:15:26.000Z

Simone was just six-years-old when she first began training in gymnastics; she started competing at age 7, and quickly made her way through to the Junior National Team.

When Simone entered high school, she was forced to make a decision: stay in public school, or be homeschooled. According to The Undefeated, Nellie told her, “To advance to the elite level and be on that cover, she’d have to be homeschooled… There would be no prom, no after-school activities, no hanging with classmates.” In 2012, Simone decided that was the path she wanted– she switched from public school to homeschooling, which allowed her to increase her training from about 20 hours a week to 32 hours a week. 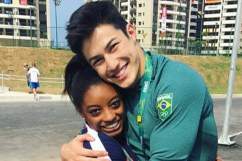 Who Is Simone Biles Dating?

Read More
Gymnastics, Rio Olympics 2016
Find out everything you need to know about Ron and Nellie Biles, the grandparents of Olympic gymnast, Simone Biles.