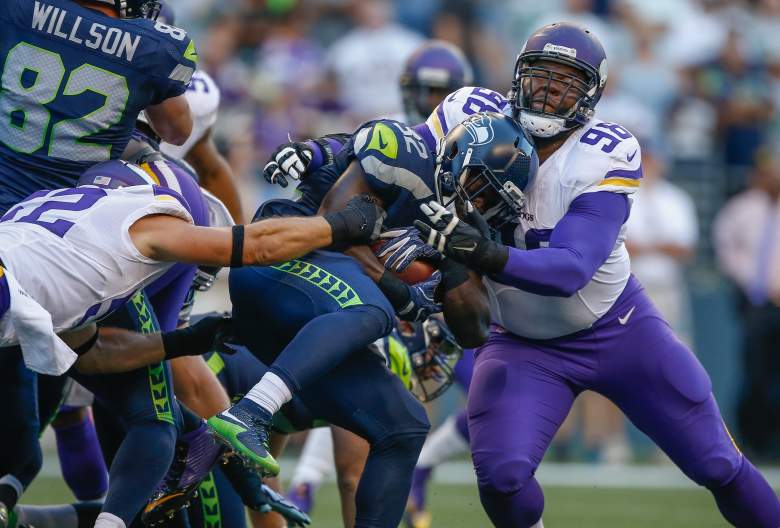 The Seahawks and Vikings squared off in Week 2 of the preseason. (Getty)

It looked like a familiar ending for Vikings fans before one crucial play changed everything. Like last season’s playoff matchup, Blair Walsh has the opportunity to kick the go-ahead field goal. Walsh hooked the ball to the left of the goal post, and it appeared he would be remembered once again for all the wrong reasons.

Just a short time later, Marcus Sherels intercepted Trevone Boykin and ran it back for a touchdown to take the lead. Boykin had a little over a minute left to see if he could once again work his magic. Boykin threw the game-winning Hail Mary pass to win the game last week against the Chiefs.

Boykin led a drive down into the redzone, but a late sack with no timeouts left greatly inhibited the Seahawks ability to get multiple plays off at the end. Boykin threw into the endzone on the final play of the game, but the ball sailed over the Seattle receiver.

Here’s what happened in the preseason matchup.

It Was Scoreless After the First Quarter

It was an uneventful first quarter for those looking for offense. It was 0-0 after one quarter in a game reminiscent of the 10-9 Wild Card matchup during last season’s playoffs. The weather was much warmer this time around.

Teddy Bridgewater Was Held Out of the Game

QB Teddy Bridgewater is a coach's decision. Nothing apparently wrong with him.

The Minnesota coaches decided to hold quarterback Teddy Bridgewater out of the game. The team opted for Shaun Hill to start in place of Bridgewater to get him some reps. On the Seattle side, Thomas Rawls and Jimmy Graham were among the notable names still missing from action.

McKinnon ran the ball into the endzone from just outside the one yardline. The Vikings went for two and were successful. Minnesota took an 8-0 lead midway through the second quarter as Bridgewater and Peterson watched from the sidelines.

The Seahawks Finally Scored Late in the Third Quarter

Touchdown, Seahawks! Troymaine Pope from 4 yards out gets them on the board!

Troymaine Pope scored on a four yard rushing touchdown. The Seahawks opted to go for the two-point conversation to cut the Vikings lead to three. The Seattle offense struggled at times throughout the game. The offensive line allowed a lot of pressure on Russell Wilson early in the game.

Marcus Sherels interception return for a touchdown and the #Vikings have a 17-11 lead pending PAT.

It looked as if Blair Walsh was going to have another terrible ending against the Seahawks. Walsh missed the go-ahead field goal, but the Vikings Marcus Sherels took matters into his own hands with a pick-six to give the Vikings an 18-11 lead with less than two minutes remaining.