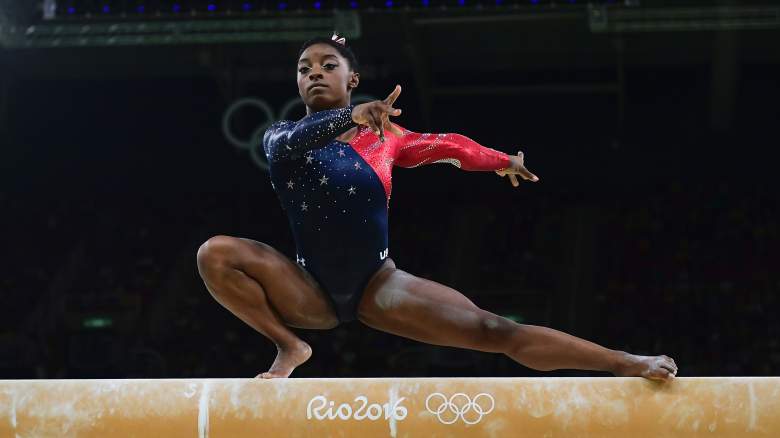 Women’s gymnastics does not favor longevity. It adheres to youth, cycling between world and Olympic champions faster than any other sport.

Simone Biles is an exception to that rule.

The 19-year-old rose to stardom shortly after the 2012 London Olympics and she has held her ground atop the sport in emphatic fashion ever since. She is the most decorated gymnast in World Championships history, and now she looks ready to conquer Rio in historic fashion.

Here’s everything you need to know about the 4-foot-9 American phenom:

1. She Was Adopted by Her Maternal Grandfather & His Wife

Biles was born March 14, 1997, in Columbus, Ohio. Her birth mother, addicted to drugs and alcohol, was deemed not fit to take care of Simone and her three siblings, and they were placed in foster care.

Simone’s maternal grandfather, Ron, and his second wife, Nellie, were there for the kids.

“The social worker called and said the kids were in foster care,” says Ron. “I said, send them to me.”

When Simone was six years old, she and her younger sister Adria were officially adopted by Ron and Nellie, while her older siblings went to live with Ron’s sister.

“When I was younger, I was adopted by my grandparents, which are now my parents,” said Simone. “I call them Mom and Dad. Everything’s just been so normal.”

2. She Hasn’t Lost an All-Around Competition Since 2013

Biles, who didn’t compete in the 2012 Olympics, last looked more ordinary than superhuman back at the 2013 Secret U.S. Classic, when she fell or made mistakes on the first three events, didn’t even attempt the vault and fell to 13th in the all-around competition.

“It was just going downhill from there,” Biles said of that moment, “and I just thought it was the end of the world. Nothing was really going right and we couldn’t figure out why. I guess I just wasn’t in a very good mental place. Then after [Classics] I went to see a sports psychologist and he helped me a lot.”

Safe to say it helped.

Biles won gold at the 2013 U.S. National Championships a month later and hasn’t lost an all-around competition since, a span that includes four U.S. titles and three World Championships.

And none of them have been particularly close, either. Biles is generally above 62 points, while competitors rarely break 60.

Nastia Liukin, 2008 gold medalist, puts that into perspective: “Normally the separations between first and second place could be three-tenths or five-tenths, and she goes out and wins by one or two points.”

Take the 2015 World Championships for example: She stepped out of bounds on floor, had to grab to balance beam to avoid a fall and still scored 60.399, which was a full point clear of silver medalist Gabby Douglas.

3. She Has the Most Gold Medals in the History of the World Championships

Since arriving on the scene in 2013, Biles has transcended the competition even at the highest level. At the World Championships (which falls below only the Olympics in terms of magnitude), she became the first woman ever to win three straight all-around titles and the first gymnast to capture 10 gold medals.

“She may be the most talented gymnast I’ve ever seen in my life, honestly,” said 1984 Olympic champion Mary Lou Retton. “She’s Simone. She is in her own category.”

4. There’s a Move Named After Her

While she’s capable of dominating every apparatus, Biles is especially untouchable on the floor exercise, where she has won three consecutive World Championship gold medals.

That’s thanks to a move that she–and only she–can do:

Dubbed “The Biles” because she was the first the complete it (before anyone else had even attempted it in competition), it consists of a double layout with a half-twist and a blind landing. It’s done at the end of her second tumbling pass.

“I’ve seen some of my guy friends try it, but they never land it,” she says. “So they get really upset.”

5. Her Coach Had Never Previously Worked With an Elite Gymnast

My coach always pushes me to get started even on the days I don't want to wake up for the gym :) #GetsMeStarted pic.twitter.com/QnT32f2hE2

Biles and her coach Aimee Boorman have been working together since Biles first walked into Bannon’s Gymnastix over 10 years ago.

Says Biles about their relationship:

I always say she’s like the second mom to me because she’s been there since I was like 8 years old, and so that’s 10 years that she’s always been by my side. I’m very fortunate to have a coach that I got to stay with all this time. Every year the bond gets stronger and better and we understand each other more. And it’s like she can tell if I walk into the gym what kind of mood I’m in, what she has to fix for the practice I need or how I’m feeling. So it’s really nice to have someone that can just like read me just right off the bat when I walk in the gym.