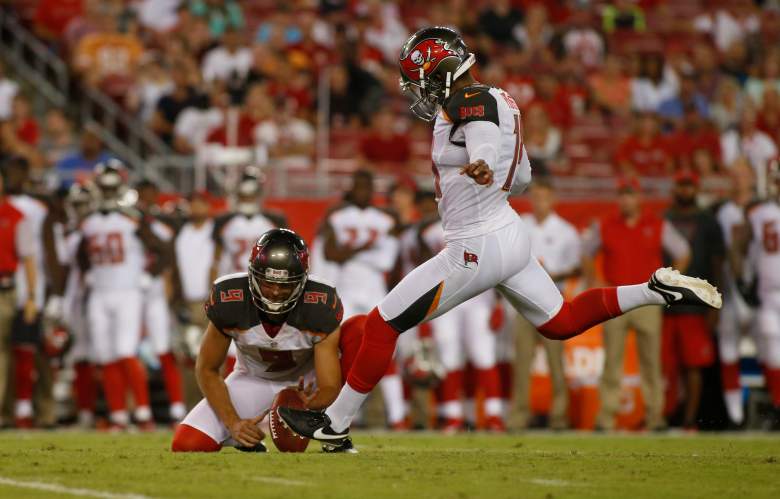 The preseason match-up between the Tampa Bay Buccaneers and Washington Redskins was moved a night earlier due to severe weather that is expected in the Tampa area on Thursday. However, there was still plenty of rain in Tampa on Wednesday. The wet field condition was far from ideal for players who were fighting for final roster spots.

Neither team had much success throwing the slippery football. Tampa Bay finished with 167 net passing yards, with Washington only totaling 56. However, the Redskins were able to establish a solid ground game, notching 188 rushing yards in the first half alone. By the end of the game, Washington had racked up 245 rushing yards. Rookie running back Mack Brown was stellar as he totaled 149 yards on 19 carries, including a 60-yard scoring breakaway in the second quarter. Rob Kelley, an undrafted free agent, continued to prove his worth on Wednesday. The 23-year-old running back had 16 carries for 99 yards.

Bucs back-up quarterback Mike Glennon had a difficult night, completing 1 of 5 passes in the first half with minus-1 passing yards. In relief of Glennon, Ryan Griffin completed 23 of 38 passes for 190 yards, a touchdown and an interception.

Here are a few highlights from the game:

Dustin Hopkins made a 47-yard field goal to give the Redskins a 3-0 lead with 9:24 left in the first quarter.

Mack Brown Took Off for a 60-Yard Touchdown Run

Mack Brown ran for a 60-yard touchdown to give Washington a 10-0 lead after the PAT. The Redskins have racked up 130 yards of total offense compared to the Bucs’ minus-3.

Both teams struggled in the passing game, combining for seven completions for 12 yards in the first half. Rainy weather from Tropical Storm Hermine led to wet field conditions, and has been a factor in both team’s play. However, the Redskins have been able to establish offensive rhythm in their ground game. Washington recorded 188 rushing yards in the first half alone.

Bucs Got on the Scoreboard with a 50-Yard Field Goal

Second-round pick @_RobertoAguayo lines up for the 50-yard FG…

Bucs kicker Roberto Aguayo made a 50-yard field goal to finally put Tampa Bay on the board with 10:28 left in the third quarter. The field goal was the longest of Aguayo’s preseason, and in a steady downpour nonetheless.

Nate Sudfeld Connected With Rashad Ross for a 13-Yard Touchdown

Washington’s Nate Sudfeld found Rashad Ross in the end zone for a 13-yard touchdown. Hopkins nailed the extra-point attempt to give the Redskins a 20-3 lead with 4:39 left in the third quarter.

Ryan Griffin connected with wide receiver Bernard Reedy for a 9-yard touchdown with 1:40 left in the fourth quarter. Griffin went 7-11 for 70 yards on that drive. Aguayo added an extra point to cut the Bucs deficit to 20-13. However, the Bucs’ comeback fell short as they lost to the Redskins 20-13.

“There are a lot of jobs on the line,” said Bucs cornerback Jude Adjei-Barimah, who is expected to play tonight. “Everybody here is trying to make a roster, trying to make this team, and this last preseason game is very important to a lot of us. We’ve got to be able to go out there and put on film [the results of] all our hard work throughout camp and be able to be evaluated by the organization. It’s very important that we get ourselves ready to go and come out here and play a clean game.”

Redskins coach Jay Gruden said the team will rest most of its starters, in addition to some veteran backups. Rookie Nate Sudfeld is expected to get the start at quarterback.

“I mean it’s not ideal to do a game a little bit early just because it kind of messes with your process of what you study each day, but I’ve been really diligent throughout the week of getting ready for this game, so I feel very prepared,” Sudfeld said, according to Redskins.com. “The funny thing is I told my quarterback coach on Sunday, I was like, ‘I feel like I could play them tomorrow,’ about Monday, kind of not thinking anything of it, so hopefully it holds true and we play pretty well. I feel very prepared.”

Fellow rookie draft picks Su’a Cravensand Kendall Fuller are expected to get their share of reps as well.