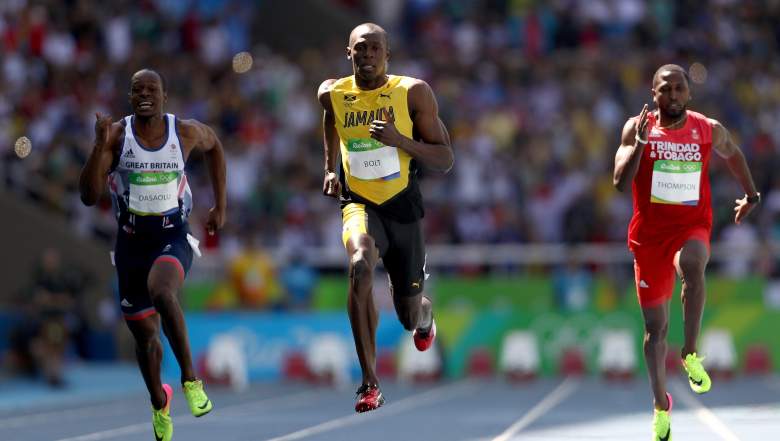 Usain Bolt will be gunning for another accolade in Rio summer: the first athlete to ever win the 100m, 200m, and 4x100m relay title at three consecutive Olympic Games.

Bolt, who’s 6-foot-5, cruised to victory in the 100-meter heat on Saturday with a time of 10.07s, and on Sunday, he won the his third straight gold medal in the 100m. The 29-year-old told reporters, “I know the sport needs me to win or it needs me to come out on top and that’s the same thing I want. We want the same thing, so I’m just working hard and staying focused.” Bolt didn’t compete in the 200m finals at the Olympic Trials last month because of a hamstring injury, but insists that the setback hasn’t fazed him and that he’s ready for Rio.

Read on for some of Bolt’s stats.

According to Medical Daily, Bolt usually takes 41 steps in an 100m race, whereas other competitors typically take around 45. In the words of Former Great Britain sprinter Craig Pickering, “Bolt is a genetic freak because being 6ft 5ins tall means he shouldn’t be able to accelerate at the speed he does given the length of his legs. At the beginning of a race you want to take short steps in order to accelerate, but because he’s so tall he can’t do that. But then when he reaches top speed he has a massive advantage over everyone else because he’s taking far fewer steps.”

Born and raised in a small town in Jamaica, Bolt spent his childhood playing cricket and football in the streets with his brother. His parents, Wellesley and Jennifer, ran the town’s local grocery store. In high school, Bolt’s cricket coach noticed his speed and agility, and suggested that he focus on track and field. Within a couple years, Usain had won his first annual high school championships. After graduating, he decided to train for regional and international competitions. Though it may be his last Olympics, Bolt still intends to run at the 2017 World Championships in London.