Semenya was married to fellow runner, Viole Raseboya, in their home province of Limpopo.

Semenya is an Olympic gold medalist whose gender has drawn scrutiny, and who has spoken out publicly about Raseboya, whom the athlete married in a traditional ceremony a few months before the Rio Olympics.

Semenya won the gold medal in the women’s 800m with a time of 1 minute 55.28 seconds; her testosterone levels were the subject of controversy, said The Independent. Some call the scrutiny cruel.

Semenya and Raseboya have emotionally described their love for each other.

When Semenya won a gold medal at the Rio Olympics in the women’s 800 metre race, both Semenya and Raseboya were subjected to homophobic comments, said Morning News USA.

British runner Lynsey Sharp was criticized for complaining about Semenya.

2. Raseboya & Semenya Were Married in a Traditional Ceremony

The couple was married in 2016. “Semenya and her long-time girlfriend, Violet Raseboya, had their traditional wedding ceremony in Ga-Dikgale in the Capricorn District of Limpopo,” said Sport24.

However, Semenya told Sowetan Live in 2014, “There is no wedding. Don’t believe the rumours you read in the news.”

She wouldn’t discuss reports of “lobola being paid to the family of Raseboya or the amount of R25000 reported to have been offered by her family for the right to marry her long-time partner,” said Sowetan Live.

In 2016, she confirmed the rumors, though, saying, “I just got married a few months ago. With the support I get from my training partners, my wife, coach, fellow South Africans and the support system at the university, there’s no way you can’t be happy,” The Citizen says.

3. The Couple Met When They Were Teenagers & Dated For Years Before Getting Married

Semenya told The Citizen the pair “met when they were teenagers.” They dated on and off for eight years, becoming more serious about two years ago, the news site said.

They live in Pretoria, and Semenya told The Citizen the relationship was built on a “good friendship.”

The Sunday Times quoted Semenya as saying, “We met a long time ago. I was about 15. We’ve been on and off. We decided to take things seriously two years ago, look up to our future and get married.”

The Sunday Times said Semenya “wears a brown leather bracelet engraved with the words ‘I love you Caster,’ a gift that Violet gave her in 2014,” quoting the athlete as saying, “It symbolises her love for me. It’s my lucky charm, I wear it all the time. It makes me feel like I take her with me everywhere I go…She means everything to me.”

Am happy I can able to take my shoes n run again #Babystep. Caster le Mapaseka I want to compete with u.

On Instagram, Raseboya has publicly rooted for Semenya’s success. Her profile page says “Be who you are and say what you feel.”

“I choose u And I’ll choose u over and over without pause Without a doubt I’ll keep choosing u You are my inspiration My motivator My supporter My Stregth GOODLUCK MASAI, GOODLUCK THEKU DO UR BEST AND GOD WILL DO THE REST…….” Raseboya wrote on one Instagram post of Semenya.

She also wrote: “You the most person I always look up to.Very brave,strong,caring,humble,and kind You are ur own CEO #wordofencouragement….u must love people who gossip behind ur back,that’s exactly where they belong. You must know u have True friends,Mentors and family who are behind you all the time.#TeamCas#TeamCobraalltheway #Myeverydaycrush#WCW.”

In another post, she wrote, “You are an inspiration to everywomen no mzanzi” under a photo of Semenya.

5. Semenya Was Born Female but Has a Condition Called ‘Hyperandrogenism’ 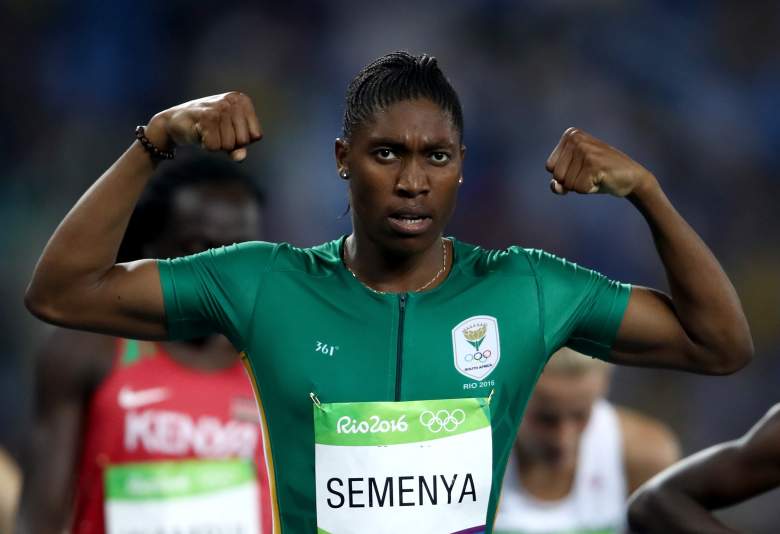 Caster Semenya of South Africa reacts after winning gold in the Women’s 800 meter Final on Day 15 of the Rio 2016 Olympic Games at the Olympic Stadium on August 20, 2016 in Rio de Janeiro, Brazil. (Getty)

The New York Times says Semenya has faced “brutal scrutiny.” She was previously banned from competition and made to undergo gender tests, with one Olympic official saying she was not 100 percent female, and competitors calling her a man, said the Times.

The sport’s governing body then passed a testosterone threshold level for female competitors, the Times said. In 2009, the Daily Telegraph reported that Semenya had internal testes, an account the Times said was not verified.

The Advocate says Semenya is a lesbian and has never said whether she is intersex.