Chad le Clos and Michael Phelps resumed the rivalry that started in London in 2012 for the 200m butterfly semifinal at the Olympic Aquatic Centre in Rio on Monday.

Le Clos snatched gold from Phelps in the 200m Butterfly final in the 2012 games. Before Monday’s semifinal in Rio, le Clos appeared to be warming up purposely right in front of Phelps in the ready room.

The South African swimmer shadowboxed and went through different motions as Phelps stared ahead with an extremely determined expression.

Phelps outraced le Clos in Monday night’s semifinal, finishing second at 1 minute and 54.12 seconds. He qualified for the final with the second fastest overall time.

After the heat, Phelps was asked by NBC’s Michelle Tafoya what he was thinking in the ready room with le Clos warming up in front of him.

“Nothing, honestly, I was trying not to really even look at him. He does his thing, I do my thing. I was watching the heat in front of me,” he told Tafoya.

In the interview, Phelps called le Clos a “tough” competitor. They will swim in side-by-side lanes tomorrow in the final.

“It’s always good to get in the water and race him,” he said.

People quickly took to social media to comment on the tense interaction before the semifinal:

When you're sitting there minding your own business and you look up and see @MichaelPhelps's demon face. pic.twitter.com/hKA2gzD3XQ

Me when I see my crush with a different girl… @swimswamnews @USASwimming @MichaelPhelps pic.twitter.com/42u0vbJpFt

Another look at Michael Phelps getting ready for his race … pic.twitter.com/g6EptLjVq9

Let's check in with Michael Phelps to see if he holds grudges…. pic.twitter.com/gQAUtbQ4a5 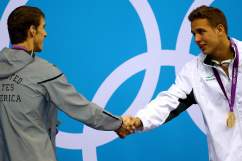 Read More
2016 Olympics
Chad le Clos and Michael Phelps resumed the rivalry that started in London in 2012 for the 200m butterfly semi-finals at the Olympic Aquatic Centre in Rio on Monday.