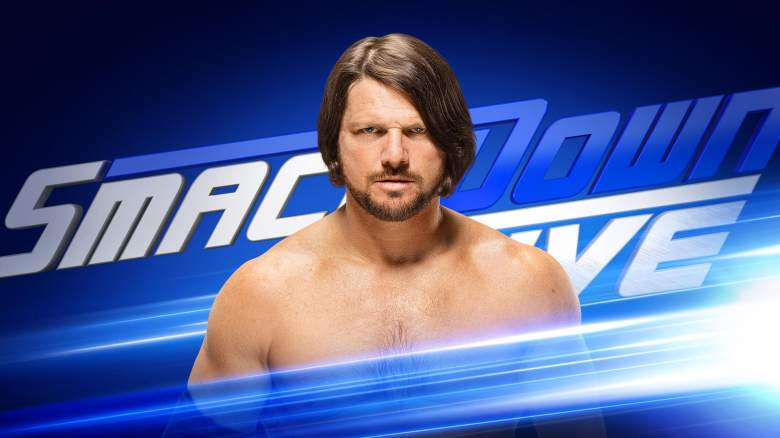 Tonight on SmackDown, it’s the first episode following the massive SummerSlam pay-per-view, and the fallout of that event will be dealt with. Plus, Nikki Bella makes her first appearance on SmackDown since her triumphant return on Sunday. The show will be broadcast live from Philadelphia at 8:00 p.m. Eastern Time on the USA Network. Read on for live match results and spoilers, followed by a full preview of the night’s events written earlier this afternoon.

8:00 – Backstage, AJ Styles declares himself the new face that runs the place. He also puts on one of John Cena’s “never give up” wristbands and mocks Dolph Ziggler for losing to Dean Ambrose at SummerSlam. Ziggler punches him in the face and has to be restrained.

8:02 – Shane McMahon and Daniel Bryan enter. They speak to much of the roster, telling them they have a huge opportunity in front of them. Two new titles are seen on the stage, the first of which is the SmackDown Women’s Championship. A women’s six-pack challenge will occur at Backlash, and this will determine the first SmackDown Women’s Champion.

Also introduced is the SmackDown Tag Team Championship. Daniel Bryan announces that they will have a Tag Team tournament, which culminates at Backlash but starts tonight.

Heath Slater crashes the party in the middle of Bryan’s explanation. He wants some sort of championship, but Bryan very delicately tells him that he’s not “equipped” to challenge for the Women’s Championship. Slater says he’s talking about the Tag Team title, but Shane points out that Slater is not a member of the roster and doesn’t have a partner. Bryan says that if Slater can find a partner by the end of tonight, he can compete for the title next week. He will only become a member of the roster if he wins the entire tournament.

AJ Styles enters, but before he can speak for very long, he’s assaulted from behind by Dolph Ziggler.

8:18 – Backstage, Heath Slater runs into The Miz, asking him to become his tag team partner. The Miz seemingly accepts, only to reveal he was actually talking on the phone with Steven Spielberg and didn’t even notice Slater was there.

8:35 – AJ Styles enters. He says that everyone in the locker room is jealous of him, especially Dolph Ziggler. AJ says he did exactly what he said he was going to do: beat up John Cena. He tells that Cena fans don’t have to be Cena fans anymore: they can now be AJ Styles fans, because he is the face that runs this place. Finally, Styles says he should be the #1 contender for the World Championship.

Dolph Ziggler storms in, with several referees trying to hold him back. An angry Daniel Bryan enters, telling them that they’re ruining this show. It seems they want to fight, he says, so Bryan announces a match between AJ Styles and Dolph Ziggler tonight. If AJ wins, he will face Dean Ambrose for the WWE World Championship at Backlash. If Ziggler wins, he gets added to that Backlash match, and it becomes a triple threat.

8:46 – Carmella is scheduled to fight Nikki Bella, but while Nikki is being interviewed by Renee Young, Carmella brutally attacks her from behind. Carmella leaves as Nikki Bella remains injured in the ring.

8:56 – Randy Orton enters. He shows that he has 10 staples in his head after his match with Lesnar, and he goes on to blast Shane McMahon for intervening. In the middle of Orton’s promo, Bray Wyatt enters.

Wyatt says that Orton’s injury should have reminded him that he is just a man, whereas Wyatt is not just a man; he is a god. He’ll find out about it in time, Wyatt says before disappearing.

9:04 – Backstage, Shane McMahon says that Brock Lesnar crossed the line, but he doesn’t think Stephanie McMahon is taking the issue seriously, pointing to the fact that Lesnar is being fined just $500. Shane adds that this thing between him and Lesnar isn’t over.

9:27 – Backstage, Dean Ambrose says he just found out about the Dolph Ziggler vs. AJ Styles match because he was upstairs gambling and wearing a ridiculously giant hat.

At SummerSlam, Dean Ambrose was able to successfully defend his WWE World Championship title from his challenger, Dolph Ziggler. Now that Ziggler has been dealt with, who else might be headed out of the woodwork to come after the belt? Last night on Raw, just about everyone in the roster wanted an opportunity to fight for the newly-abandoned Universal Championship, and tonight on SmackDown, we might see a similar situation as superstars compete to be the next number one contender for the World Championship title.

Plus, the aftermath of Brock Lesnar’s bloody match with Randy Orton still has to be addressed. Not only did Lesnar leave Orton in a massive pool of blood, but he also attacked SmackDown Commissioner Shane McMahon in the final moments of the pay-per-view. On Twitter, Shane said that Lesnar crossed a line at SummerSlam, and last night on Raw, Stephanie McMahon agreed, saying Lesnar will face consequences. What might Shane McMahon have to say tonight at SmackDown?

.@BrockLesnar IS a main event attraction but last night he crossed a line…

Then we have AJ Styles, who will have a chance to gloat tonight after beating up John Cena at SummerSlam and emerging victorious. How will Cena recover from his humiliating loss?

On the Women’s Division side of things, we’re all still waiting for news about the SmackDown Women’s Championship title, and Nikki Bella making her return tonight may be the perfect opportunity to introduce it. And speaking of new titles, we’re also expected to get a new SmackDown Tag Team Championship, with American Alpha being the favorite to earn it. Will we hear more about that tonight?